Reusing, Reindeer, and Roadrunners - Blogging from A to Z Challenge

For the 18th day - Letter R - I am focusing on Reusing, Reindeer, and Roadrunners.

- Reuse birthday and Christmas cards by making bookmarks that can be given away at a local school library. Cut the images out with pinking shears. Punch a hole at the top and then put ribbon or embroidery floss through the hole. You can also glue the card onto deckle-edge paper. Students can pick a bookmark each time they check out a book.

- Greeting cards also can be used to make postcards. 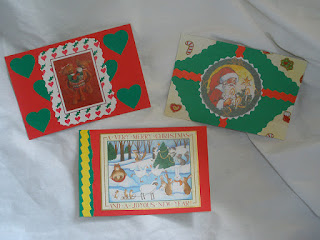 Postcards that I made from old Christmas cards and scrapbook paper.
The back of the postcard (the side you write on)
is from a cereal box.

- Wool sweaters that have shrunk can be made into little toys. When the girls were younger, I made these wool bears with fabric patches that were hand-embroidered onto the wool. 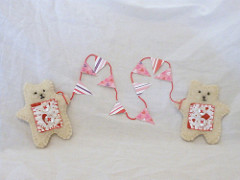 Tiny bears I made from felted wool sweaters and fabric.
The bears fit in the palm of your hand.

One of the files I had was about reindeer herders in northern Russia. The herders are called Nenets (Nen-ETZ); and they depend on their reindeer for almost everything - including clothing, transportation (they travel on sleds pulled by reindeer teams), and food.

The Nenets are nomadic and live in easy-to-move tents. When they move from summer to winter grazing grounds, the journey can take several weeks.

- They are only nine inches tall and less than two feet long.
- They can run as fast as 20 miles per hour. They are able to glide, but prefer running. 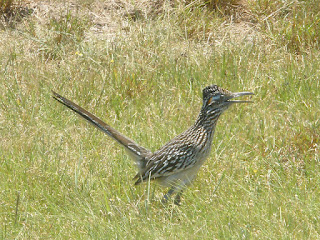 - They have about 16 different sounds.
- Their diet consists of insects, snails, mice, bats, other birds, scorpions, tarantulas, and black widow spiders.
- The bird's temperature can drop as much as seven degrees at night when temperatures can drop 50 degrees or more.
- During the early morning hours, the bird spends long periods sunning itself. It will lift up its feathers to expose a dark patch of skin on its back that acts as a solar panel.

In the process of going through the files that began with "R," I recycled a half of a bag of papers. Throughout the challenge, I've recycled 15 1/2 bags of papers.
Posted by Harvest Moon by Hand at 11:32 AM

Those little wool bears are adorable!

I am new to your blog... only a couple of weeks reading and enjoying it tremendously and actually learning so many things. I am so interested in the activity book you made for your children and would really like to see the activities you did for all the pages -- maybe just photos of all the pages? so I could copy/adapt them in some way. I would love to make these for my grandchildren. I think you are so creative and so full energy and wonderful ideas. You seem to have a very happy family. Many blessings to you and your "little" ones.

Stopping by from A to Z: R for Race
Shari

such a great feeling to de-clutter. I miss the days when the kids were little but we amassed so much stuff.

A Piece of Uganda