The Importance of Family Traditions 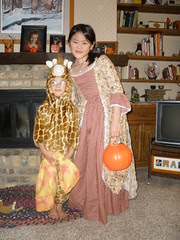 The Girls on Halloween
Originally uploaded by Pictures by Ann
This year was the first year that I heard the girls articulate the importance of having family traditions.

Each year, the girls go trick-or-treating around my parents' home (their grandparents). They go with their cousins which is something they look forward to doing.

Because of having a puppy this year and having limited time away from the house, I thought perhaps modifying the Halloween tradition by simply visiting grandparents during the day and showing them the costumes would be something the girls would be okay with. Apparently not.

"I've been looking forward to having dinner with everyone and then going out trick or treating with my cousins!" Sophia said. Olivia agreed.

There was no changing this tradition.

Having traditions that children anticipate and can count on is so important. They can predict what can happen...when it will happen...and have some control over their lives. It provides comfort and assurance in a world that sometimes doesn't always offer that to children.

One thing I did have to modify this year was going out and getting new costumes for the girls. Having had a very difficult year financially because of medical issues as well as damage to the house from the storms in May, I had the girls choose costumes from ones they already had. Sophia chose to be a pioneer girl and Olivia chose to be a giraffe. Although disappointed that they didn't get a new costume, they were happy with the costumes they wore this year.

Another tradition that I do with the girls each year is to add to their "Halloween Bag." The bag Olivia is holding is a pillowcase that I dyed, put an orange ribbon around the top so she can tie it, and thraced her handprint on. In the center of the handprint is the costume she wore and the year.

Sophia also has a bag like this with her handprints, but she chose to use the pumpkin I used when I was growing up.

The girls enjoy looking at how their hands have grown through the years and what costume they wore each year.

Again...a simple activity...but one they count on and look forward to doing each year.
Posted by Harvest Moon by Hand at 6:48 AM No comments:

Getting Ready for Christmas 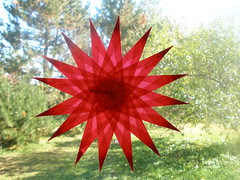 It seems rather early to start thinking about Christmas, but this year I'm going to create more homemade decorations and make gifts for others.

This is one of the stars that I thought would look pretty in the window during the holiday season. I'm also selling it in my Etsy shop along with some other red, green, and white window stars.

I was inspired to start making these stars after seeing them at a local Waldorf school. They brightened the windows and seemed to make the school so cheerful and welcoming.

Since I homeschool my daughters, I want to create a similar environment for them at home - one that is nurturing, inspiring, and filled with happiness.

The window stars are things they enjoy looking at, and are excited about - especially when I try a new pattern or use different colors.

This star will have to wait a couple of months before it goes back up on the window. It will join other red, green, and white stars this year on the windows...and hopefully be one of the things that provide the girls with good memories of a beautiful Christmas. 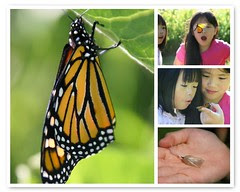 Raising Monarchs in 2008
Originally uploaded by Pictures by Ann
This is the second year that the girls have raised and released monarchs. Last year, there seemed to be a lot more caterpillars than this year. Read an article during the summer which said that for some reason people were noticing a decline in the number of monarchs. With fewer butterflies, they wondered what next year would be like.

That being said, the caterpillars the girls did find in the backyard were fascinating to watch. They have an indoor screened cage where they raise the caterpillars. Each day, they pick fresh milkweed leaves and put them in the cage.

They watch the caterpillars grow rather rapidly...and then make the crawl up the side of the cage.

One of the caterpillars last year they were able to see change right in front of their eyes. It's an amazingly quick process. This year, they saw the tail end of the change which was interesting for them to watch.

After about 20 days, the butterfly emerges, dries off its wings, and the girls bring in fresh flowers for the butterfly to enjoy. They keep it inside for less than a day, and then release it towards the evening.

They can read about monarchs in a science book, but for them to actually raise, touch, and release these beautiful butterflies first-hand is invaluable. These are experiences that they will remember!
Posted by Harvest Moon by Hand at 6:21 AM No comments:

The Beauty and Simplicity of Acorns 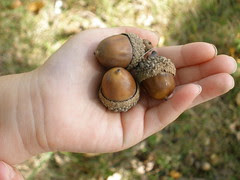 Acorns in a Hand
Originally uploaded by Pictures by Ann
The connection that Sophia and Olivia have with nature is very strong. Part of homeschooling involves learning about and appreciating the beauty that surrounds us.

The beauty of acorns - the contrast between the smooth nut and the bumpy cap...the lovely shades of brown - is something that the girls notice and love to share with others.

These acorns were brought inside and placed on the nature table so they can be enjoyed each day.
Posted by Harvest Moon by Hand at 6:39 AM 1 comment: 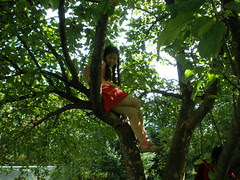 Sophia in Apple Tree
Originally uploaded by Pictures by Ann
The girls love climbing in the apple tree in the backyard. Besides feeling like they're in a totally different world, climbing trees is a great lesson in problem solving. They have to figure out how to use the tree trunk and limbs to move higher in the tree.

That's one of the reasons why I love homeschooling them. If they need a break from what they're working on, I send them outside. Often times, they head right to the tree and climb it.

Clearly, it challenges them in different ways...and brings focus and clarity to what they are working on when they come back inside to resume their lesson.
Posted by Harvest Moon by Hand at 6:33 AM No comments: