Halloween was on a Monday this year, and on Tuesday the girls go to a homeschool co-op. We leave the house by 7:50 a.m., so that means that we don't stay up late on Monday nights.

This - combined with blustery/rainy weather - made it a relatively easy decision for them not to go trick-or-treating. This is the first year that they have not gone trick-or-treating since they were little.

What they still wanted to do, however, was participate in the costume parade at the nursing home. 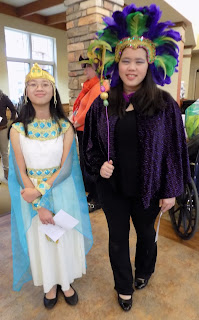 They have been doing this now for a few years and enjoy it. The staff and some of the volunteers dress up; and then walk around and talk with residents. The residents vote on their favorite costumes. 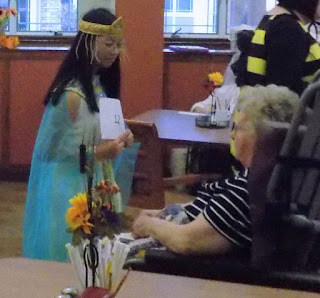 Many of the residents were wearing hats so they could feel like they were dressed up and participating as well which was fun. 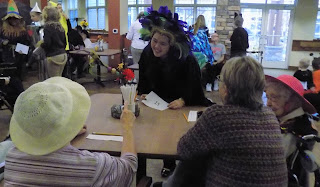 The parade takes place in the dining room and quite a few residents - and sometimes their families - enjoy seeing the variety of costumes. 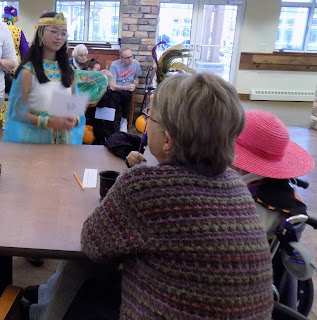 It's fun for the girls to talk with the seniors and hear them share memories or receive compliments on their costumes. 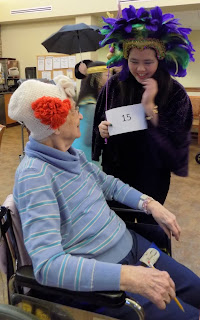 At the end of the parade, those in costumes gather for the annual picture. The costumes this year were impressive - especially the trio from the Wizard of Oz and Mary Poppins & the Chimney Sweep. All of them showed a lot of creativity and Halloween spirit! 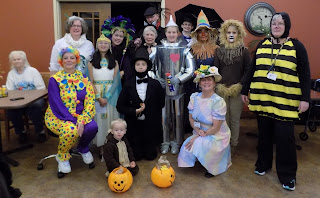 Since we weren't trick-or-treating, the girls suggested we start a new tradition. They asked for pizza from the local pizza place. 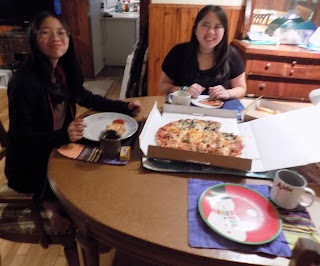 For dessert, we had Lemon Chess Pie (basically a lemon meringue pie without the meringue) that Olivia made. 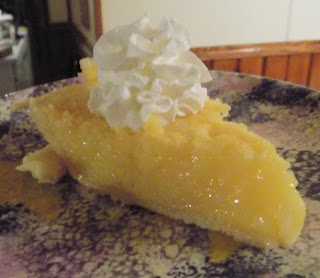 The recipe came from her Five in a Row cookbook that she is finishing this year.
Posted by Harvest Moon by Hand at 7:10 PM 1 comment:

For the sixth day of the Countdown to Halloween, the theme was Witches.

I found a pin on Pinterest for Witchy Guacamole Dip that was on Fork and Beans. 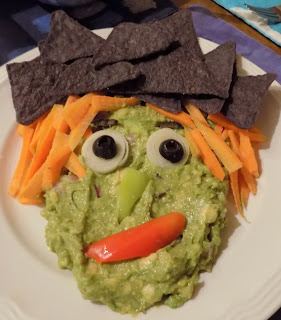 There are quite a few ingredients - most of which I had on hand. For those I didn't, I just substituted something else that was in the refrigerator.

In a bowl, mash the avocado. Add the garlic, onions, and lime juice. Mix until well combined. Season with sea salt for flavor.

Add the guacamole to the lower half of a serving plate.

Create the corn chip hat and then add the carrots for the hair.

Assemble the face and serve. 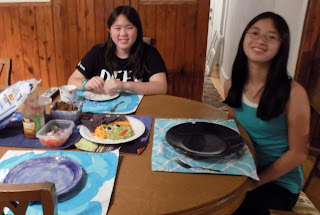 This was a fun dish to prepare and serve. To make it into a dinner (versus snack), I made some taco meat. We put taco chips on our plate and then topped them with the taco meat, dip, and cheese.
Posted by Harvest Moon by Hand at 7:08 PM 1 comment:

One of the recipes that we make each year for the Countdown to Halloween is Boonilla Shakes. It's basically a homemade vanilla shake (vanilla ice cream, vanilla extract, and milk) poured into a glass that has two squirts of chocolate syrup on the side of the glass (to represent the ghost's eyes) 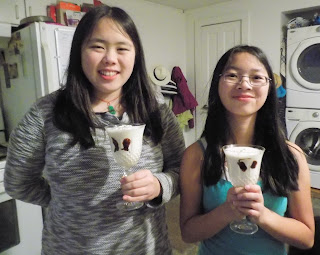 This is something that the girls request, so it has become a family tradition, of sorts, to make it close to Halloween. 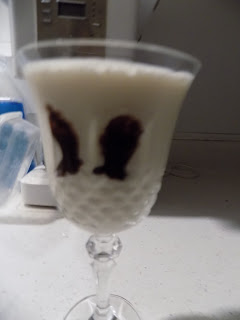 I've made ghost-shaped pancakes in the past, but didn't this year. We weren't hungry for a big breakfast, so we opted for a simple one instead.

Originally we were going to make chocolate cookies that had a spider design on them (for the cobweb theme). However, we're trying to cut down on the sweets we eat.

So, I ended up making a baked pasta recipe that I found on Pinterest that led to Cleverly Simple. 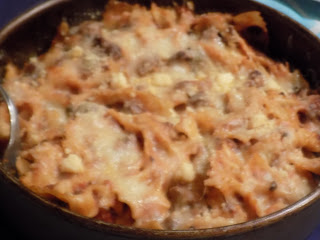 It's an easy recipe that takes only a little more than a half hour from the preparation to eating. Despite the rather unappealing look to it, it tasted great. The recipe serves six so there was plenty for leftovers the next day.

Preheat oven to 400 degrees Fahrenheit. Bring water to a boil and add the bowtie pasta. Cook according to instructions on the box.

Cook the ground beef, onion, and garlic until the beef is no longer pink. Drain.

Add the pasta sauce to the ground beef mixture and simmer.

Once the pasta is ready, drain it, and put the pasta back into the pot. Add the ground beef mixture and half of the mozzarella cheese.

Put everything into a 9x13 pan sprayed with cooking spray. Add the rest of the mozzarella cheese and the parmesan cheese.

Bake for 12-15 minutes or until the cheese is fully melted.

I made four mini-loaves of pumpkin gingerbread. The recipe came from a pin on Pinterest which led to All Recipes. 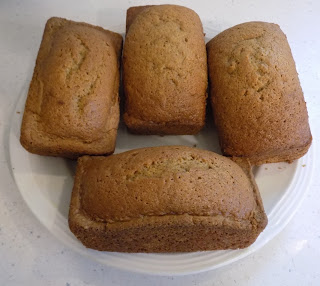 Bake in preheated oven until toothpick comes out clean, about 1 hour. 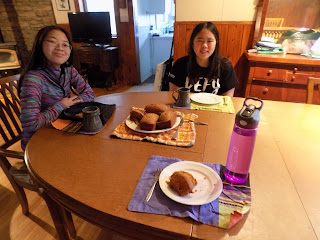 This recipe was okay. It wasn't as spiced as we were used to with other pumpkin breads we've made. We all decided that we would stick with the pumpkin spice bread recipe that I've used since I was a teenager. The recipe came from our next door neighbor.

This year, we didn't go to a pumpkin patch to get larger pumpkins. The girls found two smaller pumpkins in our patch which they felt was enough. They didn't want to carve pumpkins this year which was fine.

They are trying to get caught up with their homeschooling after a one-week vacation. So, I'm okay that they want to do schoolwork versus pumpkin carving. There's always next year.

For dinner, I wanted to make the Stuffed Jack O Lantern Bell Peppers. I bought the bell peppers and was ready to use the recipe from the pin I found on Pinterest that led to All Recipes.

However, when I looked more closely at the recipe, I noticed it had a half cup of chili sauce. I knew that Olivia wouldn't eat it; and that I needed to make something more mild.

Ended up using my mom's recipe for stuffed peppers instead of the one on All Recipes.

When preparing the peppers, I boiled them in hot water. When they came out, I realized there was no way in the world I was going to be able to cut the eyes and mouth out of the boiling-hot-peppers and have them look like the photo on Pinterest. 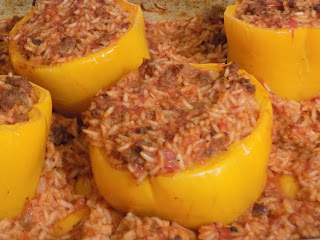 So, we just had the dinner with the plain peppers instead of peppers meant to look like Jack O Lanterns.

I'm happy that I have recipes that were favorites of mine when I was growing up; and that I'm able to make them for my family now. In some ways, the passing along of traditions and family recipes is more important than needing to try new recipes.
Posted by Harvest Moon by Hand at 6:23 PM 1 comment:

For the second day of the Countdown to Halloween, we made Monster Donuts. We had some leftover candy eyes from yesterday's meal, so this was a good way to use up the rest of the package.

The idea came from this pin on Pinterest that led to Your Home-based Mom.

On Your Home-based Mom, the donuts were chocolate. I looked for them ,but couldn't find any plain chocolate donuts. The only chocolate ones they had were already frosted.

So, plain donuts it is for today's recipe.

All you need to make this easy breakfast is donuts, green frosting, and candy eyes. 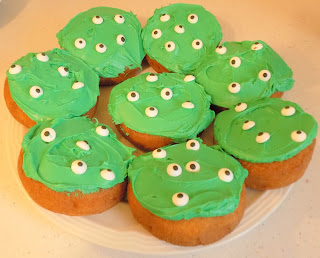 We spread the frosting on the donuts and added the eyes...and we were ready for breakfast. 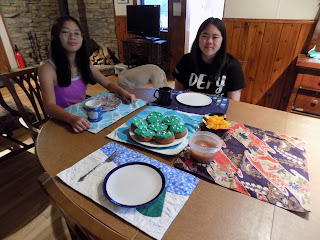 Even though the girls are getting older, sometimes it is fun to do unexpected things with meals. I think it is more the tradition of doing the countdown than, perhaps, the actual food that is made. Nonetheless, having these special memories and traditions to look back upon hopefully will make them happy when they are older and reflect back on their childhoods.


Posted by Harvest Moon by Hand at 6:14 PM No comments:

For the first day of the Countdown to Halloween, we did a mummy theme again this year.

Found a pin on Pinterest for Meatball Mummies that led to Spend with Pennies. 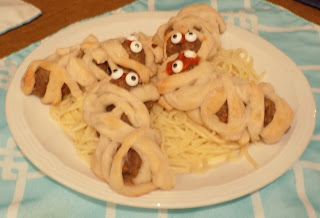 To make six servings of this dinner, you need:

Make the meatballs. I do this in the oven, so I kept it on for the next part of the recipe which also calls for a preheated 350 degree oven.

Cut the pizza dough into thin strips (about ¼" wide).

Thread 3 meatballs onto a strand of spaghetti to hold them in place. As a side note, because the meatballs were homemade and hot, the spaghetti noodles began to soften. The noodles didn't hold the meatballs in place like they would have had I used frozen, pre-packaged meatballs that were thawed.

At any rate, begin wrapping dough around the meatballs stretching and criss-crossing until the meatballs are covered. Leave a little space open for the eyes.

Remove the spaghetti strand and place the meatball mummy on a parchment-lined pan.

Bake 19-23 minutes or until browned. Remove from oven, brush with melted butter and add the edible eyeballs. 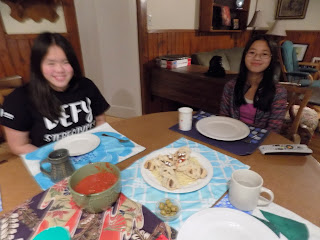 This was an easy-to-make dinner and one that we enjoyed.
Posted by Harvest Moon by Hand at 6:16 PM No comments: