Today, the 13th day of Countdown to Christmas, was St. Lucia Day. It was, perhaps, the most meaningful one we've celebrated to date.

We spent part of the day at the nursing home with Sophia playing the harp for residents and their families in the assisted living section. 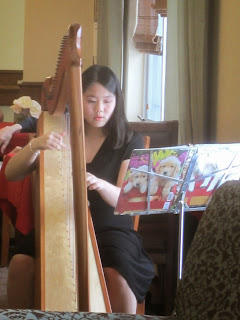 Sophia playing the harp at the Christmas party for
seniors and their families.

There were about 25 people there. 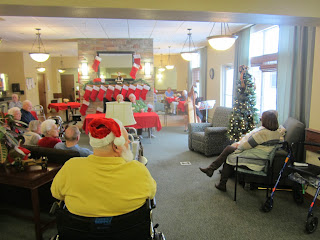 Sophia is playing the harp (to the right of the picture)
while residents and family members listened.

Some were residents and others were family members. 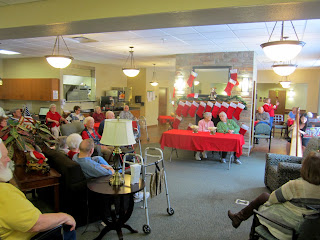 The residents were so quiet as they listened to Sophia play.
The activities director encouraged people to talk, but
most simply wanted to listen to the Christmas songs she was playing.

This year, we knew many of the residents because of volunteering at the nursing home during the past year. 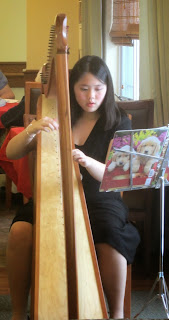 Sophia is concentrating on playing one of the songs.

Although Sophia said at home that it made it more nervous when she knows people who she is playing for, once she was there she seemed very relaxed. 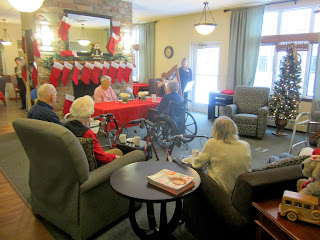 Tia sang a Christmas song while Sophia played the harp.

It helps that the seniors are so supportive and appreciate of both Sophia and Olivia. It's like having a room full of grandparents encouraging you when you are sharing your gifts.

While Sophia was playing the harp, John (one of the residents in the nursing home section) came over to the assisted living section. Tia (the volunteer director) asked if we'd like to put gifts and calendars in each of the resident's rooms.

So, John (dressed in a Santa's hat), Olivia, and I went room to room and put the gifts and calendars in each room. John was in no hurry to get back to his room. "I'm with you!" he'd say to us when we asked if he wanted to stay or go back to his room. He's told us he considers us his family. That means a lot to know we've had that impact on him...and vice versa. 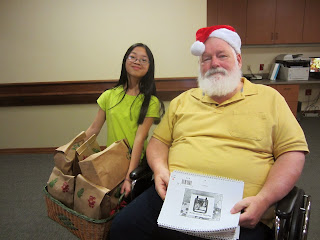 Olivia with gifts and John with calendars
as we put them in each of the resident's rooms.

Before Sophia took a break from 45 minutes of playing the harp, Tia sang while Sophia played The Drummer Boy. 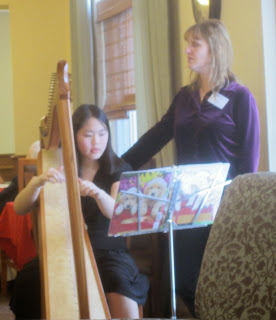 Around 3:15 p.m., Sophia played two more songs that Tia sang to the residents and guests while I was helping Olivia get into her St. Lucia costume.

We went to the assisted living section first since Tia said many of the residents were wondering what "St. Lucia Visits" meant on the activity calendar. When she came into the party area, Olivia was welcomed with lots of "oohs" and "aahs" by the seniors. 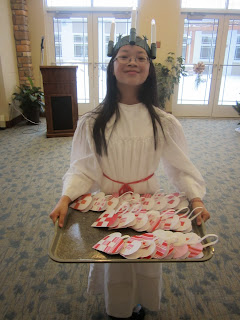 Olivia dressed up as St. Lucia.

One of the seniors said, "This is a picture for next year's calendar!" Tia took pictures of the girls separately and together by Sophia's harp. I think it made them feel good to know how much happiness they brought to those who saw and heard them today.

Sophia stayed in the assisted living section to relax after her performance. She ended up playing a game of Skip-Bo with Bonnie (one of the residents) and two members of her family for about 45 minutes.

That gave Olivia and I time to pass out Swedish fish in the woven heart baskets that I made for each person. 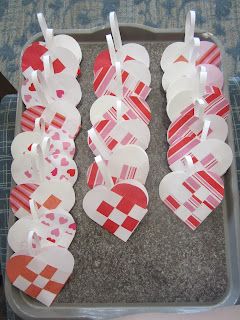 The Swedish heart baskets filled with Swedish candies
ready to be passed out to the seniors.

Some of the residents immediately knew who Olivia was and greeted her with, "St. Lucia!" 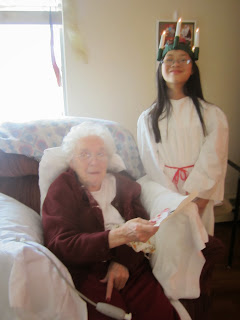 Another resident shared memories about celebrating St. Lucia Day at churches he attended. 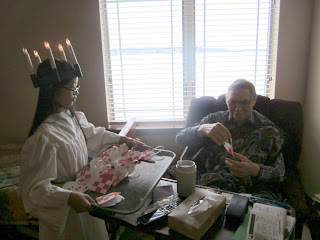 John looking at the Swedish heart basket with the candy inside.

Another resident was so delighted to get a gift and candy. We passed out photographs we had taken of some of the seniors on previous visits and gave them to the residents. 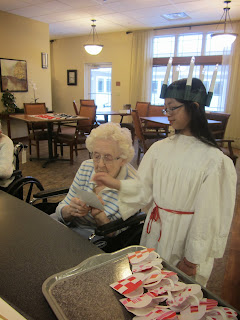 Iva was delighted to get candy and photographs.
"How much does this cost?" she asked.
"It's free. It's our gift to you."
"Oh! That's wonderful!!" she replied.

One was so excited about them, she had to share them with a woman who was sitting right next to her. 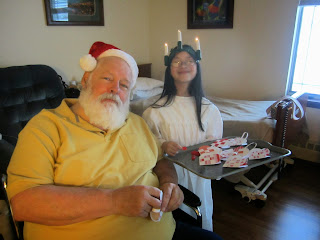 John with Olivia.
He wanted to know when we would be back and
had me point to the date on his calendar so he knew.

Another resident continued to look at them...not once, but many times. He kept flipping the pictures and looking at each one over and over again. 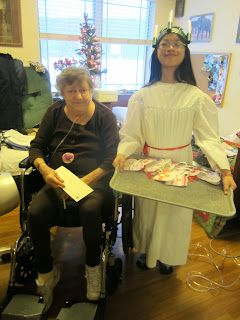 Marie wanted to have a picture taken with St. Lucia.
She was happy to know I'd make a copy of the picture for her and
give it to her the next time we saw her.

One woman was so excited about a visit that she said she wished she had a camera. I told her I did and could take her picture and make her a copy. "Would you do that?" she asked. She was just so appreciative of such a simple thing. 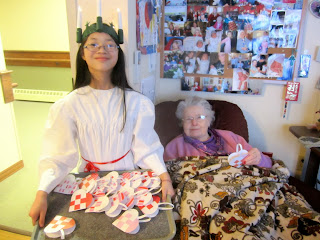 Olivia and Annabelle.
Annabelle has been to almost every activity we've done, and
we always try to see her when we bring Eenie (the cat) in.for visits.

We were happy to visit some of the residents who we have known since February (when we began volunteering), and give them a little gift. These seniors have added so much to our lives...it's the least we can do.

After we were done with the visits, we headed to the local bank where there was an open house. We entered contests, enjoyed some treats, and took some of the free items they were giving away (e.g., calendars, pens).

In the evening, we made Grinch floats and watched The Grinch on t.v. The idea came from this pin on Pinterest that led to Make and Takes. Basically, you put green sherbet in a cup and add a clear pop (e.g., 7-Up, Sprite). 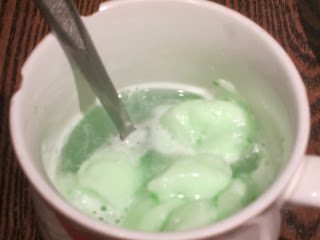 The Grinch float that Sophia made.

So, it's kind of like a root beer float in concept, but the Grinch floats have a completely different taste.

Luke 1:39-45 - Soon afterward Mary got ready and hurried off to a town in the hill country of Judea. She went into Zechariah's house and greeted Elizabeth. When Elizabeth heard Mary's greeting, the baby moved within her.

Elizabeth was filled with the Holy Spirit and said in a loud voice, “You are the most blessed of all women, and blessed is the child you will bear! Why should this great thing happen to me, that my Lord's mother comes to visit me? For as soon as I heard your greeting, the baby within me jumped with gladness. How happy you are to believe that the Lord's message to you will come true!”

Why does Santa have three gardens?

Olivia planting onions and beans in 2011.

We learned about snowflakes and how they are unique:

Snowflakes form in a wide variety of intricate shapes, leading to the popular expression that "no two are alike." Although possible, it is very unlikely for any two randomly selected snowflakes to appear exactly alike due to the many changes in temperature and humidity the crystal experiences during its fall to earth. 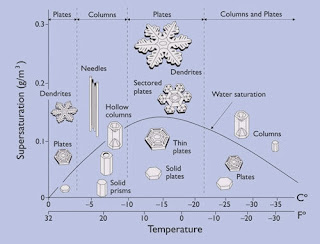 Initial attempts to find identical snowflakes by photographing thousands of them with a microscope from 1885 onward by Wilson Alwyn Bentley found the wide variety of snowflakes we know about today.

In 1988, Nancy Knight was documenting snowflakes for the National Center for Atmospheric Research and thought she found two identical snowflakes of the hollow column type. However, atomically they were different from one another.
Posted by Harvest Moon by Hand at 11:59 PM

What a wonderful time with the seniors! Just had me smiling all the way through. Thanks for posting all the pictures. You are like family to them--and they to you. :):)