This is a swap on Swap-Bot that I'm participating in that I thought looked fun. The goal is to take five photos (from a list of ten items) and give some information about them - where did I take it, is it part of a series of photos, or whatever other information that I think is interesting.
Another option is to use old photos that I have taken. This latter option is what I chose to do. I always enjoy going through photos that I've taken and seeing if they bring me back to when I took them.
Purple
I took this photo on June 8, 2019, in Osceola, Wisconsin. The town has a committee that does floral or natural displays along the main and side streets as a way to beautify the community and drive throughout town. One of my favorite colors is purple, so this display caught my eye. 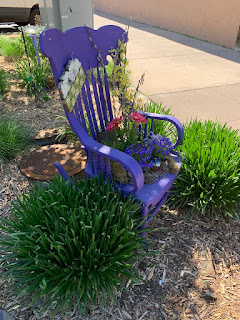 Diamonds
On June 18, 2017, Sophia (then 16 years old) completed this diamond quilt. This was, by far, her most ambitious quilt because of the cutting and layout she needed to do to create the diamond pattern. She was very happy with how it turned out. 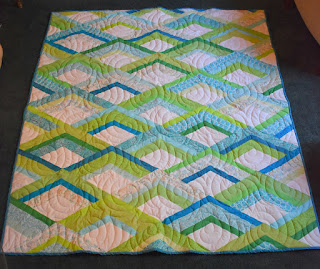 Keyboard
I had totally forgotten about this "learn how to type" program that I had Sophia and Olivia do as part of homeschooling. Here, on April 23, 2013, Sophia is playing a game on computer using the keyboard to learn to type. Wheels
On June 18, 2018, the propane company came out with a Bobcat to move our tank to a new location after we had a fire that burned down our hobby shed. The propane tank was about 15 feet - at the most - from it. Thankfully, our neighbor who was a retired firefighter saw the fire (we weren't home) and turned off the tank. Things could have been quite different had he not done that. 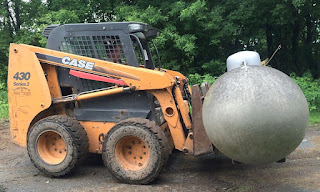 Flags
On May 28, 2018, Memorial Day, I visited Fort Snelling National Cemetery. Someone had put a flag in front of my parents' gravestone - as they did in front of the gravestones in the entire section. I was so touched to think that someone took time out of their day to honor my dad who served in the Korean War.

Shopping
On March 12, 2020, the shelves at Walmart were completely stripped of paper products - toilet paper, paper towels, and napkins. Other sections of the store, likewise, were bare. It made shopping for the basics quite difficult. 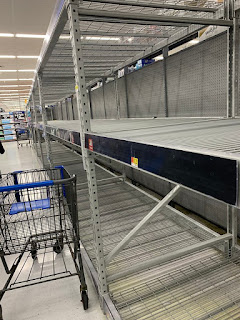 Mountains
For Sophia's (homeschool) high school graduation, we took a trip to Washington (state) and Alaska. This is one of the many mountain ranges in Alaska. It was such a beautiful place to visit. We went there before she graduated since the costs increase substantially in the summer there. This was taken on April 27, 2019, on the way to Girdwood, Alaska.

Boots
Of course I could have used a photo showing a normal pair of boots, but why do that when these attractive blue plastic boots were documented on June 3, 2012? Sophia, Olivia, and Colton (their cousin) went to a dairy/creamery operation. Everyone had to wear these blue boots when they went into the creamery. 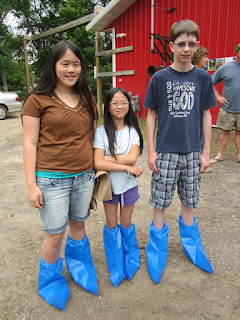 Vintage
This was one of my favorite ornaments when I was a girl. When my parents died, my sister, brother, and I went through the ornaments and I picked this one. On December 8, 2013, the little red fawn with white fur trim was on our Christmas tree. 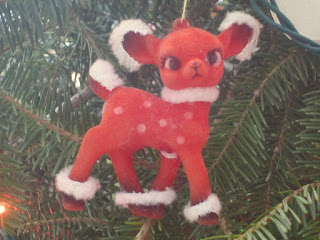 Glass
By far, one of my favorite places we visited when we were in Seattle, Washington, was Chihuly Garden and Glass. The glasswork there - both inside and outside - was spectacular. I especially liked this boat scene with the glass orbs in and around the boat. The black floor reflected the boat and some of the orbs. I could have spent hours there looking at all the different colors and patterns of this on exhibit alone. 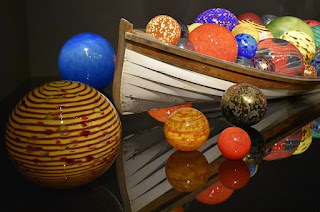 Back in August, I entered Homemade Salted Nut Rolls at the county fair. I saw the recipe on Pinterest that led to Shugary Sweets. My entry received first prize in the candy category.

Would I make this recipe again? No. Although the taste (especially the center filling) tastes just like the store-bought version - although much fresher - the process for getting the hot caramel onto the frozen center and then quickly rolling them in chopped peanuts is challenging. The caramel almost instantaneously hardens so that the peanuts can't adhere to it. At any rate, the recipe is below. 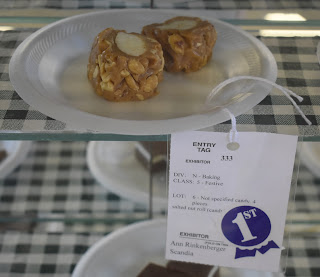 Ingredients
For the filling:
½ cup unsalted butter
7 ounces marshmallow cream
5 cups powdered sugar
1 teaspoon pure vanilla extract
For the coating:
2 (11 ounce) bags caramel bits
2 tablespoons unsalted butter
2 cups chopped peanuts
Instructions
For the filling:
Melt the butter and marshmallow cream in the microwave, for about 30-60 seconds, until the butter is fully melted.
In a large mixing bowl, combine melted butter and marshmallow with the powdered sugar and vanilla. Cream together until just blended. Drop onto a large piece of parchment paper.
Use your hands to knead the “dough” into a large ball. Divide the ball into 6 equal portions. You’ll then want to use your hands to roll each portion into a 7-8-inch log (the key is to keep it 1-inch thick around).
Wrap each log in parchment paper and freeze for two hours until firm.
For the coating:
Melt caramel bits and butter in an 11x7-inch baking dish in the microwave, for about 1 ½ minutes, until smooth. The mixture will be thick, and the butter will separate from the caramel. That’s OKAY.
Allow the caramel to cool slightly, then using your hands, combine the butter into the caramel and press the mixture into the bottom of the baking dish. Score it into 6 equal portions.
To cover the marshmallow centers, unwrap the frozen log and using your hands, take one section of caramel and spread it over the center completely. It will feel like you’re working with playdoh.
Once the entire log is covered, press the chopped peanuts into the caramel. Re-wrap in parchment paper and refrigerate. Repeat for each log.
When ready to enjoy, slice each log into 1-inch pieces.
Posted by Harvest Moon by Hand at 1:43 PM 2 comments: 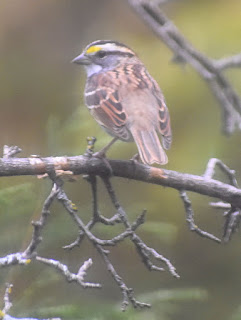 The cardinals are now coming back to the feeders. During the fall and winter, they spend more time near our home and at the feeders. They remind me of my parents who were equally overjoyed when a cardinal - or a pair - would show up at their home. 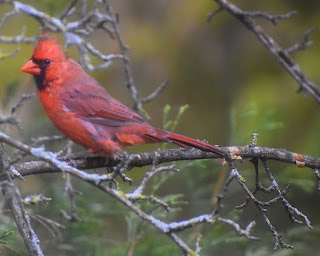 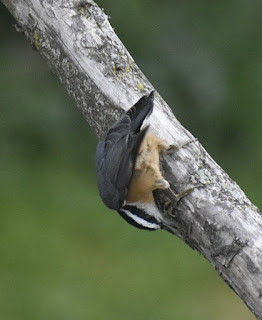 The flowers have been blooming well into October which is unusual. This one surprised me when I looked closer at it after downloading it to my laptop: the center of the flower is heart-shaped! 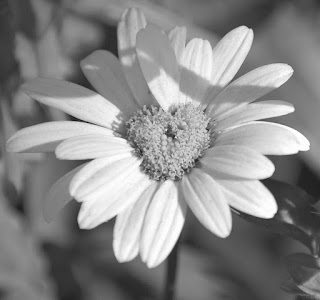 On warm days during October, the sparrows love playing in the birdbath. 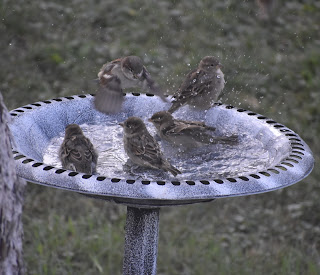 By the middle of the month, the bird feeders were getting lots of "customers." It's always a bit bittersweet when the goldfinches' vibrant yellow feathers change to a tannish-gray color. 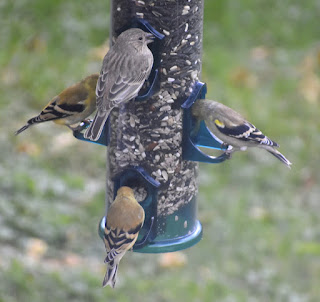 After spending a weekend at home, I brought Olivia back to college. She is on the video/tech team and enjoys it. She took me around the auditorium. This is one of the catwalks. I found out that she is tethered when she moves across the wooden pieces to her right. What isn't quite visible in the photo is that there is a gap between each piece. She needs to re-tether herself as she moves along them to adjust the lights. 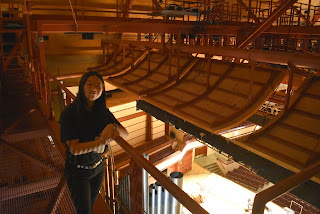 This is another catwalk that has a lot of stage lights. Below are the first six rows of the auditorium. 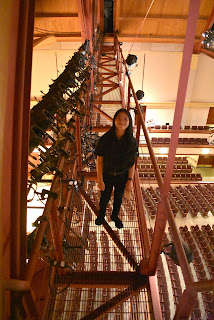 As we stood on the catwalk, this was the view down. She also works at the soundboard which is the table in the middle section. 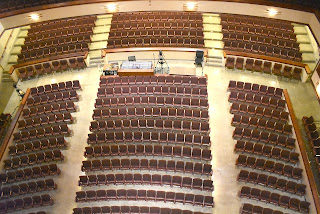 On the third weekend, my sister and I went to a cemetery in Minneapolis where our grandparents on our mom's side are buried. We cleaned the graves and got the grass back from them. We didn't have a lot of water. So, after the next rain, the gravestones should be a lot brighter.

At the same cemetery, we visited our great-grandparents on my maternal father's side. I had never been to this marker or the graves before, so this was something new. We saw that there were three additional gravestones - two belonging to their unmarried adult children and one belonging to a married adult child. Again we cleaned off each of the gravestones which was a big task. I don't think anyone in the family had been there in decades to do that. 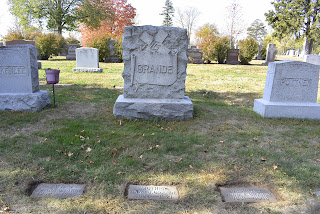 While we were in the area, we stopped by the church where our parents got married in 1964. At that time, all of the portraits were in black and white. Needless to say, the church was beautiful with its stained-glass windows. We were even lucky enough to be able to see a quinceanera. The young lady looked beautiful in her pink gown with the bouquets of pink flowers lining the aisle. 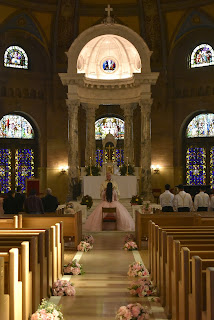 Around that neighborhood, which was considered a "Tier 2" area during the riots after George Floyd's death, there are a lot of murals. This one caught my eye. 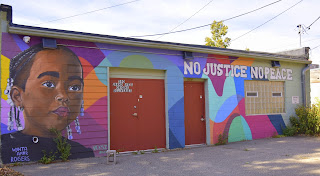 This one did too...for a more humorous reason. 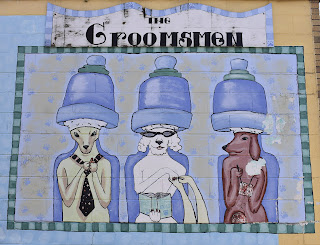 Our last stop of the day was at the home where my grandma and grandpa (on my mom's side) and my mom lived starting in 1942. Our grandpa died in 1951, my mom got married and moved out to her first home with our dad in 1964, and our grandma died in 1982. So, the home was in the family for 40 years. 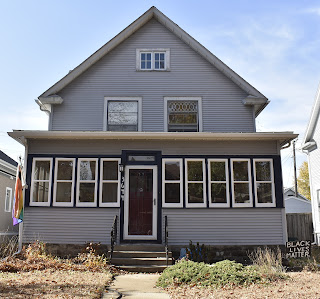 We were simply going to take some photos outside of the home. After we did that and were in the car, we noticed a woman peering out behind the door. I went back and introduced myself, and told her the purpose of taking photos.
To make a long story short, she invited us in and we were able to see the home 40 years after we last saw it! A highlight was seeing the beautiful stained glass window still at the landing on the staircase. It was such a gift that the current homeowner gave us by letting us see the home. What was so touching was the care they are taking to preserve and restore the home. All the original woodwork - since 1904 - is there. 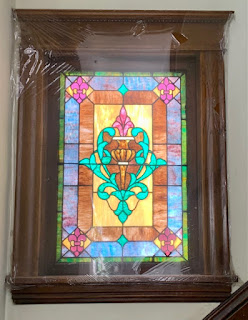 Our last stop of the day was seeing a duplex that my grandparents and mom lived in from 1938-1942. My mom would have been 8-12 years old at the time. I'm not sure if they lived on the first or second floor.
Interestingly, we have passed by this home hundreds (probably thousands) of times. It wasn't until my sister and I started doing genealogical research that we were able to get the addresses of some of the homes where our ancestors lived. 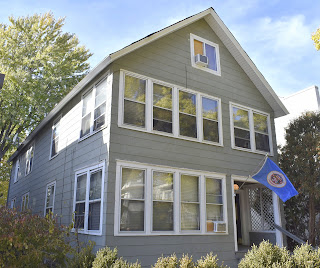 After that, I became pretty sick and have been dealing on and off with laryngitis, fever, a respiratory infection, persistent cough, and sinus issues. Lots of children at the school where I work are sick now - over 5% with the flu alone (which they need to report to the Minnesota Department of Health). So, there are no more photos from the third week of October through the end of the month.
Posted by Harvest Moon by Hand at 11:25 PM 2 comments: