To kick-off the 2016-17 composer study, we focused on Sergei Rachmaninov (also spelled Rachmaninoff). 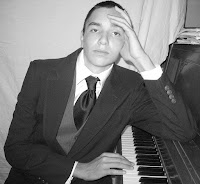 We checked out two CDs from the library so we could listen to pieces by Rachmaninov:

- Rachmaninov - Piano Concertos 1-4 - Rhapsody on a Theme of Paganini
- The Complete Solo Piano Music - Rachmaninov - Sonatas No. 1 & No. 2 - Corelli Variations

During this late-Romantic period, some of his works are among the most popular in the classical repertoire. Rachmaninov is one of the major composers of the 20th century.

He started playing piano at age four. By 1892, he had graduated from the Moscow Conservatory; and had composed many piano and orchestral pieces.

Five years later, his Symphony No. 1 was poorly received. This sent Rachmaninov in a four-year depression during which time he composed very little until he went through therapy successfully. At that point, he received positive feedback about Piano Concerto No. 2.

After the Russian Revolution, Rachmaninov and his family left Russia and lived in the United States, first in New York City. A month before his death from advanced melanoma, he acquired U.S. citizenship.

So, this month we listened to the following four pieces. Their names and what the girls thought of them follows:

Sophia thought:
- It reminds me of a ballet.
- I liked the beginning part - it was more dramatic (than a couple of minutes into the piece).
- I hear the piano. It's noticeable, but not as pronounced as some of the other instruments.
- It would be nice background music when I'm doing schoolwork.

Olivia thought:
- I like the beginning. It kind of reminded me of a car chase.
- I hear violins - I like them with the piano.

Sophia thought:
- It starts out like a "bad guy song."
- I like the music when it is less dramatic and more even in terms of volume.
- I like the trumpet part (about four minutes in).
- The piano music sounds very complex.

Sophia thought:
- It's okay compared to the first two songs.
- This song is quieter - it is just focused on the piano.
- There's nothing that makes this special - it doesn't stand out to me.

Olivia thought:
- I feel like I liked the other two songs more. This one is okay.
- It's a quiet song.
- The notes go faster - it would be too difficult for me to play. I'm not at that level.

Sophia thought:
- The first minute: it feels like it's at the end of a song or end of a movie.
- There are parts that I like more than others.
- I don't like the parts where the music seems to skip.
- (At about 4:15): it sounds a lot different than the first part.
- This would be a difficult song to count.

Olivia thought:
- It's slow.
- I like this one more than the other one.
- Parts of it sound like a dance.
Posted by Harvest Moon by Hand at 5:32 PM 1 comment: