As the girls study about each of the states in the United States for their multi-year, multi-disciplinary unit study, a component that we all enjoy is studying about nature.

The Handbook of Nature Study blog has many Outdoor Hour Challenges for homeschooling families including one for pine trees.

We've been learning about Maine this month and its state symbols (e.g., bird, tree, flower, rock/gem). Today, we took a look at Maine's state tree and flower which is the Eastern white pine cone and tassel.

The girls listened to some facts about white pine trees from in The Handbook of Nature Study by Anna Botsford Comstock. The following facts are paraphrased from the book: 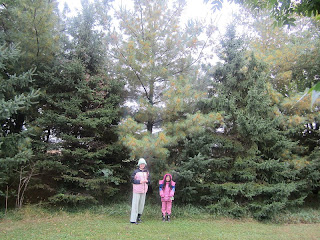 The girls by one of the white pines in the backyard.
Notice how some of the pine needs are changing colors.
The yellow/brown ones will drop and
the green ones will remain during the winter.
----->> All cone-bearing trees have a central stem from which the branches come off in whorls. 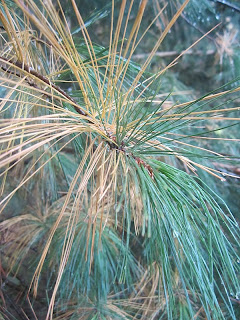 White pine needles in the autumn.
----->> The very tip of the central stem is called "the leader" which leads the growth of the tree.

----->> The bark on young white pines is smooth. On older trees the bark has ridges that are broad, flat, and scaly. 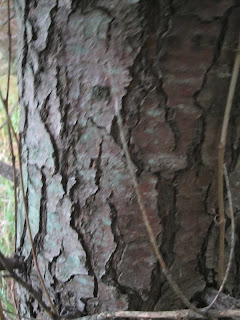 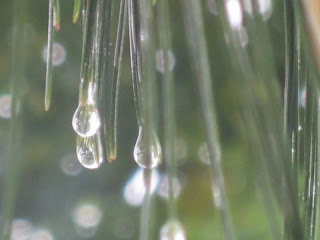 Raindrops on pine needles.
It was raining when we went on our nature walk.
- The girls colored a picture of the white pine cone and tassel in their book called State Birds and Flowers Coloring Book by Annika Bernhard. 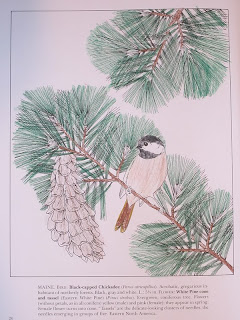 Sophia's picture of the white pine cone and tassel
as well as Maine's state bird (the black-capped chickadee).
The description below said the flowers (without petals, as in all confiers) are yellow (male) and pink (female); and appear in the spring. The female flower turns into the cone.

Pine blossom in the spring.
This was on one of the white pine trees in the backyard.
The "tassels" are the delicate-looking clusters of needles which emerge in groups of five.

- The girls colored pages in their book United States Coloring Book by Rod and Staff Publishers. Each two-page spread shows the state they are studying about as well as some highlights and facts about the state. The state bird is included with each illustration. 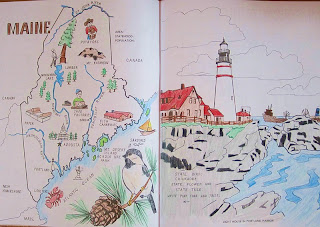 Sophia's colored picture of Maine.
Each two-page spread about a state includes
a picture of the state tree, flower, and bird.
- Since we had studied white pine trees in February 2011, we did not do another nature journal entry. 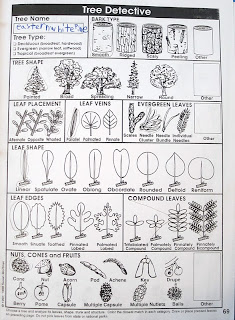 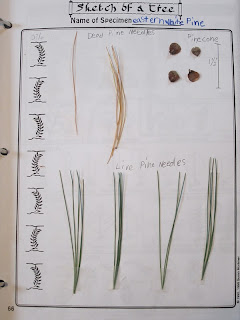 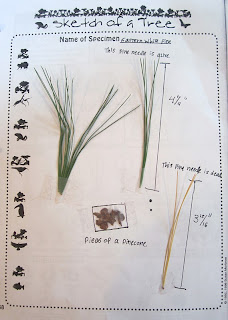 Sophia's tactile page about white pine trees.
She included green and yellow/brown pine needles
as well as pieces of a pinecone.


The next tree that we'll be studying is the white birch which is New Hampshire's state tree.
Posted by Harvest Moon by Hand at 12:17 PM

Another one you can do right in your own backyard! Excellent. I was thinking that we must be on the same wavelength because I had already suggested looking into your state tree and flower as part of the next OHC newsletter grid study. But your study is going so much farther....I will love seeing your progress over the next few years.

Thanks again for sharing your link with the OHC. I think your journals on this one are fantastic.

I use to do the same kind of stuff when i was young. I am now following you from the hop and would love a follow back over at http://mizzreviewlady-mommyreviews.blogspot.com/
Thanks! :)

Beautiful nature study. We are using Cantering the Countryside to teach each state. Just love what you have done!
found you on the friday blog hop. I review Christian books on my blog at http://www.melanieski.blogspot.com
Melanie

Great post. We've just recently discovered Barb's great blog. And have finished challenges 1 and 2. Hopefully one day our nature study will look like yours! I'm a new follower from the Friday Blog Hop--would love a follow back.

Very interesting, thanks for sharing :)