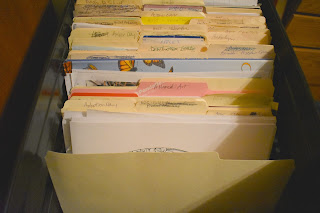 Some of the files I have for homeschooling.

Some of the files are still relevant while others I will be decluttering and recycling in the process.

The "A" files before (above) and what's remaining (below)

For the first day, I am focusing on  alphabets and alphabet coloring books.

This Spring, I am going to finish the two alphabet books I started when the girls were younger. One has each letter on a page with a variety of images from nature: animals, flowers, plants, insects, and other wildlife. This is my favorite one. 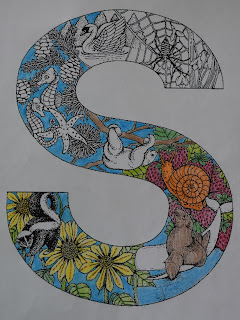 The other is the Hotch-Potch Alphabet Coloring Book (see below for the letter "A").

In the eighteenth century, alphabet cards provided an entertaining way for children to learn their letters. They were used to teach everything including mathematics, grammar, and astronomy. These coloring book features the alphabet published in 1782 by Carington Bowles.

Interestingly, as I looked through the book, it is missing the letters J and U. I was curious to know why.

According to Wikipedia, "In the year 1011, a monk named Byrhtferð recorded the traditional order of the Old English alphabet. He listed the 24 letters of the Latin alphabet first (including ampersand), then 5 additional English letters." The 24 letters included all of the letters in our current alphabet, minus the J and U. This is the Hotch-Potch Alphabet Coloring Book from
Colonial Williamsburg.

Once I'm done coloring the alphabets, I'm going to have them bound. I'll place them in the wooden chest I have for items that will be given to grandchildren one day.

Olivia is going to do her own version of one of the alphabet books (the one with the animals, flowers, and nature images in the letters) and have it bound for the county fair in July.

Other things I found in the "A" section of the file cabinet that I took action on:

- Gave Olivia magazine clippings about various animals and their attributes.

- Gave Sophia articles about artists who have some connection with France so that she can include the time she spent reading about them with her French (homeschool) class. 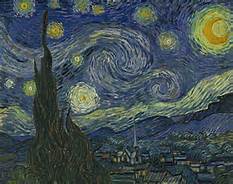 Starry Night by Vincent Van Gogh.
He was born in the Netherlands, but
lived and died in France.

- Set up an online calendar with activities to do that will use some of the copies and clippings I kept (e.g., making a spiral scarlet bean tower to attract hummingbirds as well as provide a secluded place to sit and relax; planting dahlias like I saw in Neskowin, Oregon, when I took a class at Sitka Center for Art and Ecology).

- Contacted a company that specializes in aquariums and water gardens so we can repair the outdoor pond we have now.

- Hung up three cards in my office that feature Brian Andreas' work (StoryPeople). The cards say:

They came to sit and dangle their feet off the edge of the world and after awhile they forgot everything but the good and true things they would do someday. 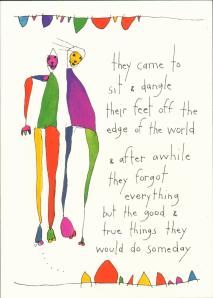 She said she usually cried at least once each day not because she was sad, but because the world was so beautiful and life was so short.

In my dream, the angel shrugged and said, If we fail this time, it will be a failure of imagination and then she placed the world gently in the palm of my hand.

In the process of going through the files that began with "A," I recycled one bag of copies and magazine clippings. 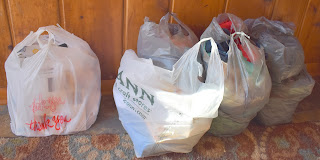 The bag of papers to be recycled is on the left.
(There are six bags of donated items on the right.)

I'm looking forward to continuing to go through the files; and learning and doing more during April. Hopefully I'll have a lot of extra space, too, once the files have been purged of things I no longer need or want.
Posted by Harvest Moon by Hand at 4:00 AM

I loved the way you have colored S. Beautiful! We once had an exercise planned by the HR team in our office, wherein we were to color bits of paper with intricate designs on it. I never realised the activity could be so much fun. We had some real good time!

What a wonderful post! I'm having a bit of a hard time with the A to Z this year - the last time I participated, there were categories for the types of blogs and I zeroed in on LI - the lifestyle bloggers - as their content is similar to mine. This year, however, there is no categorization so I feel it's not as user-friendly. I made a note of all of the Happy Homemaker Bloggers who were participating and I'll be focusing on them first before I head over to the A to Z comments list to read any others.

I think you are my kind of blogger! I'm adding you to my reading list and look forward to reading your April posts and then going back and reading some of your archives.

So glad you found me first! I'm looking forward to following along!

WE ARE LOVING THIS LIFE

That was a lovely post! The Hatch-Patch A made me laugh out loud :)

Thanks for visiting The Creative Life!

I like your theme for the challenge! It's wonderful to go through old things which have so many memories and emotional significance. I liked the story about the alphabet cards. Going on to catch up with the rest of the posts! :)