Iguanas, Insects, and Iris Folding - Blogging from A to Z Challenge - Letter I

For the ninth day - Letter I - I am focusing on Iguanas, Insects, and Iris Folding.

- A marine iguana swallows salt water when it eats its salty seafood. How does it get rid of all the extra salt? Special glands collect it. Then the iguana "sneezes" it out.
- Marine iguanas live in only one place on Earth: the Galapagos. These islands were formed by volcanoes; and they are right on the equator (hundreds of miles off the coast of Ecuador). 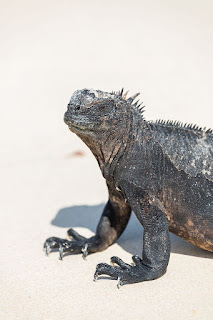 - The color and size of iguanas are different on different islands.
- Partly webbed strong muscles and claws help the iguana climb and hang on to rocks, even in crashing waves.

- Cicada live hidden in the ground for 3-17 years feeding on foots and growing as a nymph. 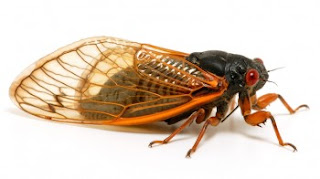 - Eventually they emerge from the ground; climb into a tree, bush, or post; shed its skin; dries its wings; and can begin singing.
- The sound doesn't come from its mouth. Rather, its body vibrates and buzzes; and sends the sound out.
- Spittlebugs live in white foam that can be found on plants and evergreens. It looks like spit. Spittlebugs don't do much harm to the plants.

Many years ago, I did some iris folding. It's a relatively quick project that uses different colors and/or patterns of paper.

There is a hole in the middle (like an iris), and then folded pieces of paper are laid around the hole in a numbered pattern and angle. 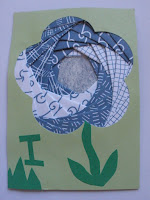 The result can look different depending on the paper color/pattern used; and the shape of the center hole as well as the outline of image. 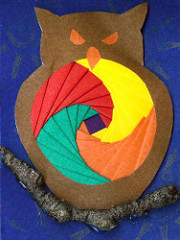 There are many free patterns online for people to use. With paper being such an inexpensive investment, this craft is affordable and fun.

In the process of going through the files that began with "I," I recycled about a quarter of a bag of papers. I didn't have a lot of files to begin with, so there's not much to recycle.

Posted by Harvest Moon by Hand at 4:00 PM

The iris folding is a great craft idea and the owl looks perfect....my son is kind of an animal encyclopedia and would love this post... I know about galagapos isles because of him :) thanks for reading my post

I love the iris folding - I don't think I've ever seen that before.

My grandson, who was brought up on the mission field in Venezuela, was bitten by a large iguana when he was a little boy. It hung from his chin and wouldn't let go. He still has the scar today (22years old.)

Iris folding looks so neat, and very pretty!! I remember living near cicadas. Very loud, and finding their empty shells was always a bit unnerving, as they're a very big bug. I'm glad we don't have them in the Pacific NW.