Forests, Foxes, and Frogs - Blogging from A to Z Challenge

For the sixth day - Letter F - I am focusing on Forests, Foxes, and Frogs. 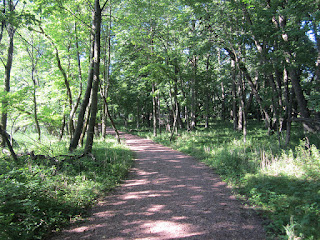 Here are some facts that I found interesting about forests and Lyme disease (spread by the bite of an infected deer tick which lives in forests):
- Data shows that 46% of bird species are dependent on young forests, such as golden-winged warblers and American woodcocks. In contrast, only 27% of bird species are dependent upon mature forests.
- Aspen is the most abundant deciduous tree in Minnesota.
- Not all people bitten by a deer tick will get Lyme disease. If a deer tick is infected, it must be attached for at least 24-48 hours before it can transmit Lyme disease. It can affect humans, dogs, cats, cattle, and horses. 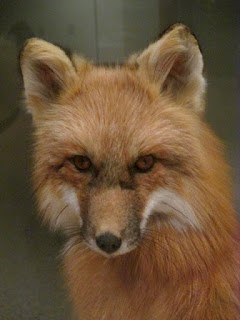 - They are the smallest members of the dog family.
- About 20 kinds of foxes live around the world.
- The red fox (which lives in Minnesota) has a white tip on its tail. 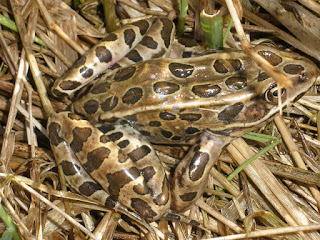 - Amphibians, because of their biological make-up and where they live, can serve as early warning indicators of problems in our environment.
-  Amphibians are most active when air temperatures are 60-80 degrees Fahrenheit and particularly during rainy weather.
- Minnesota wetlands are home to 14 species of amphibians, the most common of which is the Northern Leopard Frog. They are green or brown-spotted creatures that are also known as Grass Frogs since they are commonly found some distance from water in grassy places such as lawns and parks.
- A female frog can lay as many as 6,500 eggs in the spring.
- By the 14th week of life, froglets can breathe air and leave the water.

In the process of going through the files that began with "F," I recycled 1 more bag of papers. That makes 8 bags that I have recycled from April 1st until today.
Posted by Harvest Moon by Hand at 4:00 PM

I didn't know a fox could be this handsome. And the frog is quite elegant - a prince waiting for a kiss?
Amalia
xo

Forests, foxes, and frogs--all wonderful things. Good to know about the ticks and Lyme disease, we have tons of ticks here in Sweden. And I love the croaking sounds frogs make. Very soothing! :)

A to Z 2017: Magical and Medicinal Herbs

I know we have foxes all over here in Pennsylvania, but I rarely see them. We're always excited when we spot one.

The fox is so cute! I love foxes. :D And it's so cool the way frog is blended in. Great pics and informative post!

How are the frogs doing in Minnesota? I'm guessing that is where you are from since it was referenced a few times?