Ocean Life, Oregon Trail, and Owls - Blogging from A to Z Challenge

For the 15th day, I am focusing on Ocean Life, Oregon Trail, and Owls.

- Seahorses are threatened by overexploitation, accidental capture, and degradation of habitat. 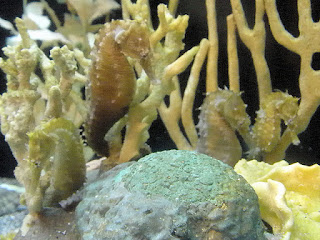 - Tide pools are rocky areas on the edge of an ocean that are filled with sea water. Many plants and creatures live there (e.g., starfish, anemones, urchins, barnacles, carbs, kelp).
The tidal zone is continually shaped by the actions of sun, wind, water, and rock.
Life is tough for plants and animals that life in tide pools. Here portions of the shoreline are regularly covered and uncovered by the advance and retreat of the tides.
In order to survive, tide pool life forms must avoid being washed away by the tidal waves, keep from drying out in the sunlight of low tide, and avoid being eaten. 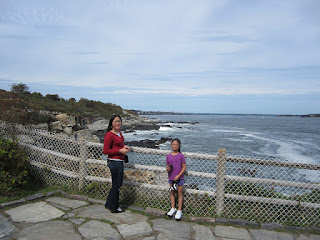 Sophia and Olivia at the Cape Elizabeth shoreline.
This was part of our New England driving tour that we took
during our "Not Back to School Week."
(Taken on September 9, 2011.)

- Always looking for an easier way, emigrants braided the road west with cutoffs and alternative routes. The decision to take a risky shortcut often split up wagon trains.

- Pioneers followed a trail route by the Platte River in Nebraska where sandhill cranes roost today. The water was too thick to drink, yet there were few other sources of water. The warm, muddy water caused diarrhea. Other hazards awaited at river crossings including drownings and lost wagons.

- Death came quickly to emigrants. At least 20,000 lost their lives, mostly to accidents and Asiatic cholera.

- During early years of migration, pioneers had hunted the bison for food and fueled their campfires with buffalo chips. 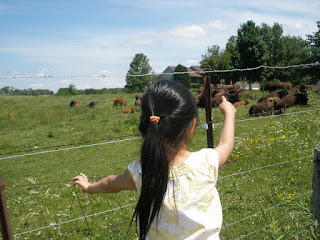 Olivia looking at buffalo that live relatively close to us.
(Taken on June 29, 2011.)

- A Great Horned Owl's "horns" are feathery tufts that look like ears. The ear holes, though are hidden under the feathers near its eyes.

- The Great Gray Owl has the largest facial disc of any owl. Its unusually small eyes make the discs look even bigger.

- An owl's eyes are so big that they cannot be moved. The eyes are fixed straight ahead. 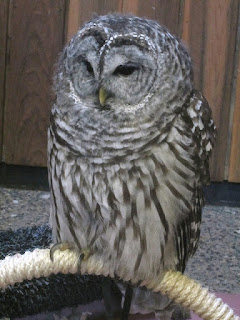 - An owl's talons (or claws) stab and hold their prey like an ice hook. Once an animal is in the owl's grasp, it rarely escapes. 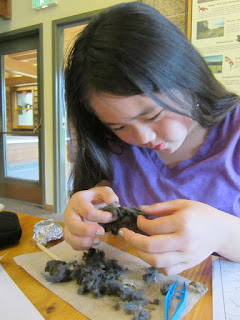 - Owls help farmers by keeping rodents and small birds away. However, farmers sometimes poison owls accidentally. When they spray their fields to kill weeds, insects, and rodents, they also harm owls. Owls eat the insects, rodents, and birds that have been poisoned. The more the owls eat, the more poison they consume.

- Owls have built-in goggles to protect their eyes. In addition to solid eyelids like we have, owls also have a see-through eyelid for each eye. When an owl is flying among branches or capturing prey, the clear eyelid closes so the eye is protected from injury.

In the process of going through the files that began with "O," I recycled a half of a bag of papers, photocopies, and magazine clippings. I'm at 13 1/2 bags of recycling since April 1st.
Posted by Harvest Moon by Hand at 4:00 PM

Good luck with your recycling. Your girls look very engaged in their learning. I learned something new when I read about the weight of the blue whale's tongue - wow.

Thanks for visiting my blog.

I learned a few new things from your post. Great topic!

I too was amazed at the weight of the whale's tongue and comparing it in weight and size tothat of an elephant give it even greater perspective. :) Linda

What an interesting post, and what an amazing project you've undertaken. I love the win-win of it - we get to learn all sorts of things and you end up with tidier files. Nice!

That's a great way to do your recycling, blogging as you go! You look like you live in a really interesting area.
Persistence (and #Fi50)
Jemima on the letter P