For this week's P52 challenge, the theme is "playtime." Some of my favorite memories are tied to playing outdoors - creating forts in the woods; biking; taking the rowboat out on the lake, going around the island, and "parking" the boat to play on the sandbar; and swinging on the swingset in the backyard.

Living in the country, there seems to be many opportunitites for Sophia and Olivia to play outside. Sometimes, though, it's fun to get out and explore a bit.

Yesterday, for example, we went to Rhubarb Days in Osceola, Wisconsin. Up until about a week ago, I had no idea there was such a festival.

After learning and doing some yoga in the park, we checked out the farmers market, did some of the children's activities, and then headed over to Cascade Falls. To get to the falls, there are well over 100 steps down from the street-level entry point.

Once there, the sounds change from the noise of cars to birds singing to water falling from the cliff to the creek below.

The girls played in the creek, stood in the spray from the waterfall, and explored the edges of the cliffs that were covered with moss. Sophia took off her shoes and went behind the waterfall to play. 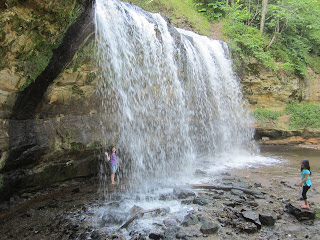 The girls playing behind and in front of the waterfall.

We watched some butterflies sunning themselves in the light as well as a yellow butterfly who enjoyed flying around us.

It was a fun and memorable way to end the week.

Posted by Harvest Moon by Hand at 6:46 AM

What a fabulous day. Great waterfall.

What a wonderful spot to play in a waterfall!! Seems like every small town--well, and the bigger ones, too--has a festival every summer. You could go to a different one every weekend--LOL! :)

What an incredible experience. Blessings!

I'm loving the playtime theme. We tend to forget that art and creativity shouldn't be stressful and anxious.

What a fabulous and special place to play!
xx