For the sixth book in the Heartwarming Animal Stories 2012 Reading Challenge, I chose Letters from Eden - A Year at Home, in the Woods by Julie Zickefoose. 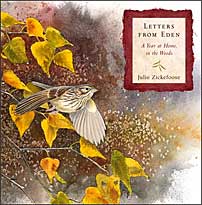 This beautifully-illustrated book is actually a collection of essays that the author wrote over many years. She grouped entries by season - moving from winter through spring and summer and ending with fall.

Throughout the book, she describes a variety of wildlife including: wild turkeys, box turtles, coyotes, songbirds, hawks, deer, and a bird-eating bullfrog.

The foreword is written by Sy Montgomery who states that often people think of the "real world" is that of malls, cars, concrete, steel, and chemical-drenched lawns. "The real world, we're led to believe, is the modern world, the urban world, the "built world - built by money."

He continued that the real world is "lush, green breathing, loving, feverish, hungry, joyous, [and] living. It's made of soil and scent, birdsongs and frog croaks, eggs cradled in down-lined nests..."

Ms. Zickefoose describes her "deep and ever-growing relationship with the wildlife" on her 80 acres. From the wildlife's behavior there, she said, "it's clear to me that these deer, these turkeys, bluebirds, wrens, woodpeckers - the countless birds who come to our yard for food and shelter - recognize us as harmless and willingly take the olive branch we extend to them."

In another entry, she wrote about bluebirds and providing nesting material for them. She wrote, "Gifts are bestowed, yes, but not without good reason: We've done what we can to welcome these birds into our habitat, putting out nest boxes for the bluebirds and gourds for the tree swallows, planting shrubs and trees for the mockingbird and sapsucker, setting out delicacies and nesting material for the chipping sparrows ....

"I realize that none of these birds were here when we arrived on the property in 1992. I remember something Bill said in 1991, when we first considered a move to Ohio. 'Don't worry. Wherever we end up, we'll make our own weather.' And so, it seems, we have."

When I read that, I thought about how - since living here from 1995 to now - that the number and diversity of birds, animals, butterflies, and insects have increased as well. There is a feeling of excitement - of joy - that comes with seeing wildlife so close to one's home.

The author shared that she mourned the loss of her father. What she wrote resonated with how I feel: "I miss him. I realize only now, on becoming a parent, that ll the things a child becomes are out-growths of who her parents are and what they do. I am grateful for all the things he was - farmer, gardener, bird watcher, handyman, teacher, inventor, teller of stories."

One of the things she did during the spring and summer (during nesting season) was to put a small table at the edge of her yard. On it, she put moss, flax twigs, animal fur, and her hair. She said that her daughter and she would watch "with delight as the wrens fashioned a perfect swirl" of a nest with those materials.

There were many facts I learned about wildlife by reading this book:

Box turtles were commonly seen along roads and highways. Yet, some 20,000 box turtles per year were exported from the U.S. in 1992 and 1993, according to the U.S. Fish and Wildlife Service. In 1996-1998, there was a zero quota for international exports from Louisiana, the only that that continued to ship crateloads of box turtles abroad.
Now, the native box turtle population is near extinction in the U.S. According to the author, "One study of a sub-species in Wisconsin showed that the loss of only one adult turtle per year could bring that population to extinction in the distant future."
Because they have no call, pheromone, or means of broadcasting their presence, attracting a mate is extraordinarily difficult.

Tree swallow nest success can be predicted by the number of feathers in each nest. Ms. Zickefoose said, "Fewer feathers mean a less-insulated nest, more parasites, perhaps less-experienced parents, and all of this translates into a lower number of fledglings in sparsely feathered nests. The more feathers lining a nest, the greater number of young might be expected to fledge from it."


Ornithologists "...have determined that, if you count all the hummingbirds you can see at one time at your feeder, you can safely multiply that number by six to determine how many birds are actually visiting!"


I thoroughly enjoyed this book, and found the stories engaging and educational. The beautifully-illustrations bring to life the stories, and provide inspiration to those of us who keep nature journals.
Posted by Harvest Moon by Hand at 6:57 AM