There are two gifts I have received in my life that stand out as being "the best": a wooden recipe box that belonged to my grandma (on my mom's side) and a book called Dad - Share Your Life With Me.

When I was a teenager in senior high school, my grandma died. A few years later, I had mentioned casually to my mom that I wish I had something that belonged to my grandma since I didn't have anything tangible.

Sure, I had wonderful memories of time we spent together, some of her recipes, and I was the only one who could make  "Grandma's rolls" like she did. (She was a baker for a good percentage of her working life.)

But I wanted something that I could physically touch that I knew that she touched as well.

On Christmas Day that year, I opened a gift from my mom and dad. There sat a little wooden box. Grandma's recipe box. 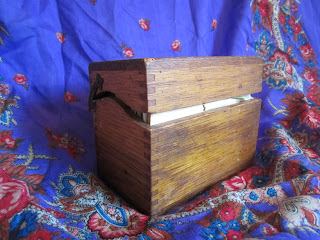 The box filled with recipes.

"Your grandma used her recipe box so much that the hinge had come off. Your father fixed it for you," my mom said.

Here, in my hands, I was holding the box that my grandma had held countless times when she prepared the food for which she was so well-known. The food that was one of the highlights of Sunday dinners at her home.

My mom - who chose that item for herself - generously gave it to me. My dad took the time to make the recipe box like new by fixing the hinge.

Three important people in my life all were represented in that one gift.

The second gift that is equally meaningful is the book "Dad, Share Your Life With Me..." that my dad gave me for Christmas 1995. 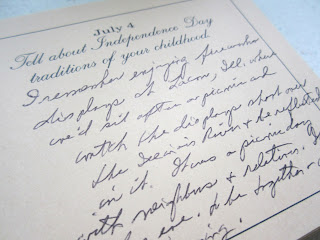 He attached a note to the cover on a yellow post-it note:


Despite the time I've had to complete this personal book of sharing my life with you, I did not complete it. At least 75 days are not completed. Please accept as is, enjoy and return when you wish, and I'll complete the book during 1996.

He added another note on the same post-it note:


Here is the completed book for your 30th birthday.

On the title page of the book he wrote a message:


Given with love and enjoyment in sharing the past of my life with you. Perhaps you too can share this with your sister and brother some time, if you wish.

I did that, in fact, for his 75th birthday. I typed 75 things that my dad wrote and gave them to my brother and  sister so they had the highlights of his life.

I also used the book as a reference for gifts and special meals that I gave or made for my dad. He noted in the book things he liked, and special foods and meals he remembered.

He shared some unusual memories from his childhood like this entry on June 12th:

Were you ever chased by some animal?


Believe it or not, several of Grandma Josephine Krug's (Uncle Walt's farm too) leghorn roosters would chase us as kids. Scared and in the backyard, we'd run into the outdoor toilet for safety.


He also shared memories of his father and advice he received:

Tell a favorite memory of your father.


Times we'd relax, rest, and simply enjoy as a family time together. I remember those times on a blanket in the yard at Springdale Farm. How proud he was of me. I was his son and what I had accomplished. He'd proudly tell others.


Tell about some good advice your father gave you.


Be thrifty - save money and prepare for the future.

I am so grateful to have both of these gifts; and to be able to use and enjoy them. 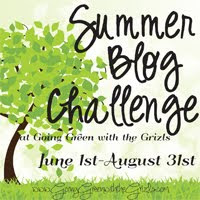 Posted by Harvest Moon by Hand at 4:20 AM

Oh, I have one of those books from my grandmother! It's not mine though, it's my sister's - she let me borrow it. And, one of my favorite possessions (which also wasn't a gift), is the last bottle of English Leather my grandfather used before he died. Ten years later, it's still half-full, and hidden in one of my drawers. When I miss him, I pull that out and it's like he's right there. I love how nostalgic you are! ♥

Wow! That recipe box is priceless!! As is your dad's handwritten memories. These will be wonderful to pass on to the girls, too. :)

Awww... I love both of them! Cherish.
Carmen

What specials gifts you received.

I would love to get a life book from my mom. Read about all her experiences. I think I'll share this post with her.