Born on January 31, 1797, Franz Peter Schubert was an Austrian composer of the late Classical and early Romantic eras. 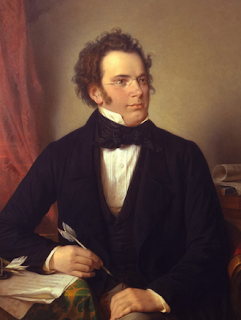 Despite his short lifetime (he died on November 19, 1828, at 31 years old), Schubert left behind a vast body of work, including more than 600 secular vocal works, seven symphonies, operas, sacred music, incidental music, and a large number of piano and chamber music pieces.

According to Wikipedia, Schubert "was born in the Himmelpfortgrund suburb of Vienna, and showed uncommon gifts for music from an early age. His father gave him his first violin lessons and his elder brother gave him piano lessons, but Schubert soon exceeded their abilities. In 1808, at the age of eleven, he became a pupil at the Stadtkonvikt school, where he became acquainted with the orchestral music of Haydn, Mozart, and Beethoven. He left the Stadtkonvikt at the end of 1813, and returned home to live with his father, where he began studying to become a schoolteacher. Despite this, he continued his studies in composition with Antonio Salieri and still composed prolifically.

"In 1821, Schubert was admitted to the Gesellschaft der Musikfreunde as a performing member, which helped establish his name among the Viennese citizenry. He gave a concert of his own works to critical acclaim in March 1828, the only time he did so in his career. He died eight months later at the age of 31, the cause officially attributed to typhoid fever."

While he was alive, Schubert's music was appreciated by only a relatively small circle of admirers in Vienna. In the decades following his death, interest in his work increased greatly; and Felix Mendelssohn, Robert Schumann, Johannes Brahms, and other 19th-century composers discovered and championed his works.

"Today, Schubert is ranked among the greatest composers in the history of Western music and his work continues to be admired."

Olivia listened to four pieces by Franz Schubert and commented on them below.

Ave Maria - sung by Andrea Bocelli
I shared with Olivia that this song was sung at my parents' wedding, my wedding, and - I believe - my dad's funeral. I can't remember if it was also sung at my mom's funeral.
Olivia's thoughts and comments:
- It's pretty.
- I can see why you would play it at a funeral. It doesn't strike me as a wedding song....just from the sound of it.
- I read to Olivia the English words of the Hail Mary (which is the translation of Latin version that is sung to Schubert's piece): Hail Mary, full of grace, the Lord is with thee. Blessed art thou among women, and blessed is the fruit of thy womb, Jesus. Holy Mary, Mother of God, pray for us sinners, now and in the hour of our death. Amen.
- Yes, it sounds more like a song that you would hear at a funeral.
- The singing was too overpowering over the music.
Piano Sonata No. 14 in A Minor, D. 784
Olivia's thoughts and comments:
- It made what the song and lyrics were about it more obvious with the words there and the shadow puppets.
- It was a song that was telling a story.
- I feel like I heard the story about the Elf King.
- It was loud when the son was saying, "My father! My father!" and also when the father was talking to the son.
- When the Elf King was talking, the music was softer...more quiet.
- I got a sense of panic when the music was going faster.
- He saw the Elf King and he died. Maybe the Elf King only appears to the kids. It could be that parents make up the story and tell it to their kids.
- I liked this one.

Posted by Harvest Moon by Hand at 9:00 AM