Antonín Leopold Dvořák, a Czech composer, was born on September 8, 1841 and died on May 1, 1904. He was one of the first Czech composers to achieve worldwide recognition. 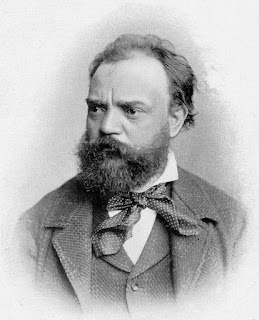 According to Wikipedia, "Dvořák frequently employed rhythms and other aspects of the folk music of Moravia and his native Bohemia, following the Romantic-era nationalist example of his predecessor Bedřich Smetana. Dvořák's style has been described as 'the fullest recreation of a national idiom with that of the symphonic tradition, absorbing folk influences and finding effective ways of using them.'"

From the age of six years old, Dvořák was a talented violin student. In 1872, the first public performances of his works were occuring in Prague. Wikipedia also stated that "in 1874, he made a submission to the Austrian State Prize for Composition, including scores of two further symphonies and other works. Although Dvořák was not aware of it, Johannes Brahms was the leading member of the jury and was highly impressed. The prize was awarded to Dvořák in 1874 and again in 1876 and in 1877, when Brahms and the prominent critic Eduard Hanslick, also a member of the jury, made themselves known to him. Brahms recommended Dvořák to his publisher, Simrock, who soon afterward commissioned what became the Slavonic Dances, Op. 46."

Wikipedia continues, "In his career, Dvořák made nine invited visits to England, often conducting performances of his own works. His Seventh Symphony was written for London. Visiting Russia in March 1890, he conducted concerts of his own music in Moscow and Saint Petersburg. In 1891, Dvořák was appointed as a professor at the Prague Conservatory. In 1890–91, he wrote his Dumky Trio, one of his most successful chamber music pieces. In 1892, Dvořák moved to the United States and became the director of the National Conservatory of Music of America in New York City. The President of the National Conservatory of Music in America, Jeannette Thurber, offered Dvořák an annual salary of $15,000 – an incredibly lavish sum for the era (equivalent to $432,056 in 2020), 25 times what he was paid at the Prague Conservatory. While in the United States, Dvořák wrote his two most successful orchestral works: the Symphony From the New World, which spread his reputation worldwide, and his Cello Concerto, one of the most highly regarded of all cello concerti.

"In the summer of 1893, Dvořák moved from New York City to Spillville, Iowa, following the advice of his secretary, J.J. Kovarík. Dvořák had originally planned to come back to Bohemia, but Spillville was made up of mostly Czech immigrants, and thus he felt less homesick....This is where he wrote his most famous piece of chamber music, his String Quartet in F major, Op. 96, which was later nicknamed the American Quartet.

"Shortly after his time in Iowa, Dvorák extended his contract at the National Conservatory for another two years. However, the economic crisis of April 1893 resulted in Thurber's husband's loss of income, and directly influenced the National Conservatory's funding. Shortfalls in payment of his salary, along with increasing recognition in Europe and an onset of homesickness, led him to leave the United States and return to Bohemia in 1895.

"All of Dvořák's nine operas, except his first, have librettos in Czech and were intended to convey the Czech national spirit, as were some of his choral works. By far the most successful of the operas is Rusalka.

Dvořák has been described as "arguably the most versatile... composer of his time". In fact, as a celebration of his life and works, there's an annual Dvořák Prague International Music Festival.

Gypsy Melodies, Op. 55
Olivia's comments:
- It kind of seems like it would be a lullaby. It kind of has that sad tune to it. It's not terribly cheerful.
- It's nice - there's more emphasis on the violin than the piano as the piece goes on.
- That was short.
- It definitely seemed more like a lullaby.
From the Bohemian Forest, Op. 68, B. 182: No. 5, Silent Woods
Olivia's comments:
- Did he not have any happy songs?
- Silent Woods - shows that it won't be terribly energetic. It feels like you are in a creepy forest. Just listening to it, you can feel it.
- It may be a silent forest, but this feels more like a dead forest or a forest in wintertime. Normally, forests have a lot of sound with the birds.
- It sounds like he's more fond of the violin in his music.
Violin Sonatina in G Major, Op. 100, B. 183: III. Scherzo (Molto Vivace)
Olivia's comments:
- I can hear the sonatina - the parts repeat.
- It changes...and then it goes back. There are three different parts of it.
- The violin is better in this piece. Songs in major keys tend to be happier and lighter.
- The tempo has changed (from the first two pieces) to a much faster one.
- Compared to the other two pieces, this one was much better for me.
Song to the Moon: Rusalka, Op. 114, Act 1 (On the harp)
Olivia's comments:
- It's in the middle - it's not super sad, but it's not super happy.
- This sounds like a song you'd maybe play to help kids fall asleep.
- It's nice to hear it on the harp. I think the main instrument he liked to compose for was the violin.
- It was more of an abrupt ending than I thought. I pictured more of a slower ending.
Posted by Harvest Moon by Hand at 10:00 AM