Ludwig van Beethoven, a German composer and pianist, was baptized on December 17, 1770 and died on March 26, 1827. According to Wikipedia, "He remains one of the most admired composers in the history of Western music; and his works rank among the most performed of the classical music repertoire and span the transition from the Classical period to the Romantic era in classical music. 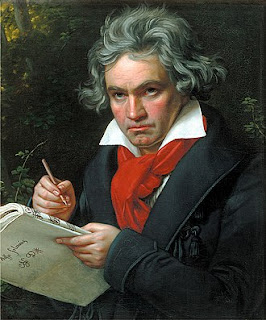 Source
"His career has conventionally been divided into early, middle, and late periods. His early period, during which he forged his craft, is typically considered to have lasted until 1802. From 1802 to around 1812, his middle period showed an individual development from the styles of Joseph Haydn and Wolfgang Amadeus Mozart, and is sometimes characterized as heroic. During this time, he began to suffer increasingly from deafness. In his late period, from 1812 to 1827, he extended his innovations in musical form and expression."
Beethoven's musical talent was obvious at an early age. His father, Johann van Beethoven, taught the young Ludwig very harshly and intensively. Later, he was taught by Christian Gottlob Neefe who was a composer and conductor. It was under Neefe's direction, in 1783, that Beethoven published his first work, a set of keyboard variations.
Coming from a dysfunctional home, he found relief with the family of Helene von Breuning, whose children he befriended, loved, and taught piano. At the age of 21, he moved to Vienna and studied composition with Haydn.
In 1800, Beethoven's first major orchestral work, the First Symphony, premiered, and his first set of string quartets was published in 1801. Despite the deterioration of his hearing during this period, he continued to conduct, and premiered his Third and Fifth Symphonies in 1804 and 1808, respectively.
Beethoven was almost completely deaf by 1814, and he then gave up performing and appearing in public. Wikipedia states, "He described his problems with health and his unfulfilled personal life in two letters, his Heiligenstadt Testament (1802) to his brothers and his unsent love letter to an unknown 'Immortal Beloved' (1812). After 1810, increasingly less socially involved, Beethoven composed many of his most admired works, including later symphonies, mature chamber music, and the late piano sonatas."
His late string quartets which were written in his last years, including the Grosse Fuge, are among his final achievements. He died in 1827 after some months of bedridden illness. Beethoven's works remain the mainstays of classical music repertoire.
Olivia listened to three pieces composed by Ludwig von Beethoven and commented on them below.
Fur Elise

- This is a classic piece that everyone knows.

- I've listened to it on Spotify.

- I prefer the violin version of this one. It seems to flow a little bit better.

- It is a lot of the same thing. That's pretty common for sonata.

- Wasn't this in the Little Einsteins...the ones who were going into a cave?

I never studied music in school so it is interesting to get backstories on these artists. Many of the pieces I have heard or heard parts of because they are used in so many movies, shows, commercials, cartoons, etc. So nice that you teach about the famous composers in classical music. :)