This week's challenge includes a variety of different activities that focus on enjoying winter and the natural world. We also explored ways that we could enjoy the outdoors when it was too cold and it was better to be inside.

We have been having many days and nights with double-digit below zero temperatures or "feels like" temperatures. Needless to say, it's not pleasant weather to be outside in. However, we did have a break in Wednesday's weather with it being in the mid-20s. So, Olivia and I went outside to gather some snow for experiments and went on a walk around part of our farm.

We did a couple of different experiments with snow:

We gathered some snow in two clean mixing bowls and brought them inside the house to melt.

After the snow melted, we looked at the items that were left in the water. 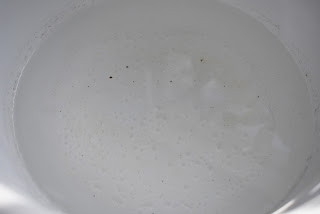 There was a lot of dirt - more so than we anticipated - both particles and a film of dirt on the bowl and on the surface of the water. There was a box elder seed pod in my bowl. We also saw a lot of small pieces of vegetation in the melted snow.
We noticed that my bowl of water - which also had ice in it - had more dirt and debris in it than Olivia's bowl which was all light, fluffy snow. 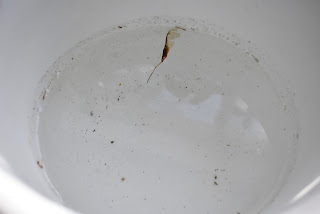 We could have taken this a step further by filtering the water through a coffee filter and then using a hand lens to examine the particles left in the filter. However, we were satisfied with what we were seeing by just observing the water.
One thing that Olivia noticed was that her bowl of water had quite a few bubbles in the bottom of the bowl. Taking a toothpick, she moved the bubbles around. They would float to the top of bowl. They were trapped air or air pockets! 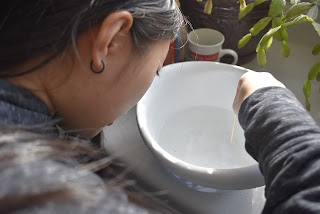 After we were done observing the contents in the bowl and popping air bubbles, we measured the water from the melted snow. Each bowl had 3 cups of water. 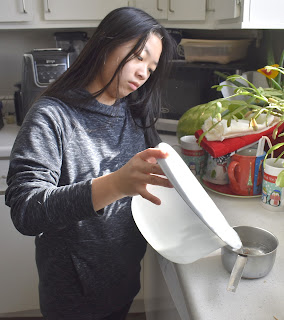 Although one bowl was bigger than the other, the smaller bowl had ice which would have had a higher water content than snow.

We filled a two-cup measuring cup with fresh snow and let it melt. 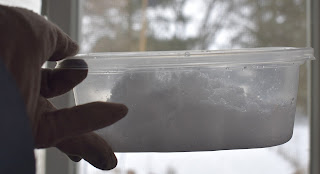 Snowflakes
Next, we talked a bit about snowflakes. We realized that we had done a snowflake nature study back on December 19, 2013. This was Sophia's nature journal entry: 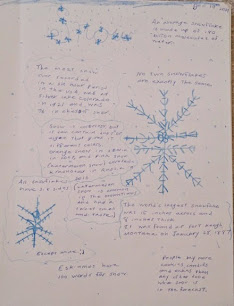 This was Olivia's nature journal entry: 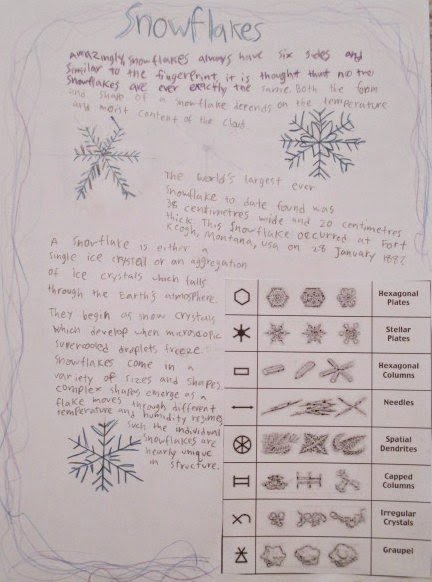 “Water in its various changing forms, liquid, gas, and solid,
is an example of another overlooked miracle -
so common that we fail to see the miraculous in it.”
~ The Handbook of Nature Study, page 808 ~

I read about the geometry of a snowflake - page 809 - of The Handbook of Nature Study. A six-rayed snowflake has angles of 60 degrees. If a snowflake only has three rays, the angles between the rays are 120 degrees.
What also is fascinating about snowflakes is their symmetry. In The Handbook of Nature Study it says, "If one ray of the six is ornamented with additional crystals the other five are decorated likewise."
Also of interest is where the snowflakes form. Those that form in the higher clouds where it is cooler, will be more solid in form and "the spaces in the angles being built out to the tips of the rays."
Snow crystals that are "formed in the lower currents of air, and therefore in warmer regions, on the other hand, show their six rays marvelously ornamented. The reason why the snow crystals are so much more beautiful and perfect than the crystals of hoar frost or ice, is that they are formed from water vapor, and grow feeling in the regions of the upper area."
Mr. W.A. Bentley, who we read about when the girls were younger, identified nearly 5,000 distinct snowflake designs!
Bird Watching
When Sophia and Olivia were younger, they would count how many birds they would see at the feeder during a set period of time. It was interesting to track which ones frequented the feeder more often.

On Wednesday, January 26th, we looked at the tracks that the birds are making by our home where the feeders are located. There are several more highly-visited feeder areas including this one by the dining room. There's 1 suet feeder, an open feeder on the ground, a round seed feeder in the tree and another one on the post, an open feeder near the propane tank, and an area to put seeds on top of the roosting box. 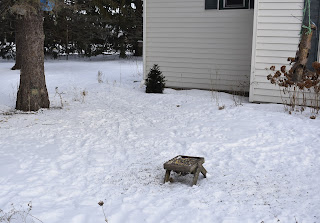 Another thing that Olivia noticed in the pasture were pheasant tracks. They are very distinctive because not only can you see the feet, but the tail leaves a trail as well.

On Thursday, January 27th, when we started observing birds around 1:30 p.m. (5 minutes per feeding station), there were NO birds that came to any of the feeding areas. It was the strangest thing. About 10 minutes later, the birds came back and were feeding at them. 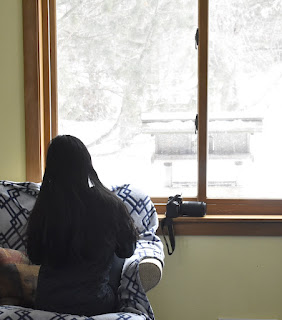 The dining room feeder (partially pictured above with the platform feeder) was so busy with activity that I couldn't keep up with counting the birds! Roughly, in five minutes, there were:
- 19 dark-eyed juncos
- 6 American tree sparrows
- 4 black-capped chickadees 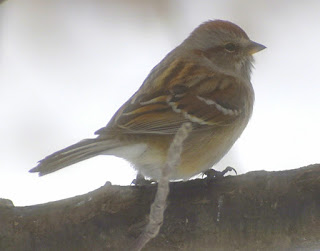 I then did bird watching at the backyard feeders. At those three stations, there are 3 suet feeders, a hanging round seed feeder from a post, a column seed feeder, 2 finch feeders, and an open tray feeder with a cover. I saw the following birds in a five-minute time period:
- 14 dark-eyed juncos (male and female)
- 2 nuthatches
- 2 black-capped chickadees
- 1 American tree sparrow
The female dark-eyed juncos are gray and white and super cute. They are all fluffed up to keep warm on these cold days. 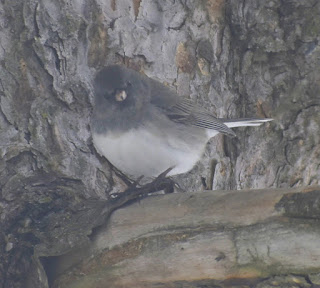 The nuthatch alternates between feeding at the suet feeder and searching the pine tree for food. 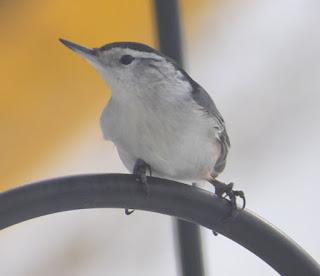 The American tree sparrow has a cute brown cap and two bright-white wing bars. It also has a stripe leading from the corner of its eye towards its neck. 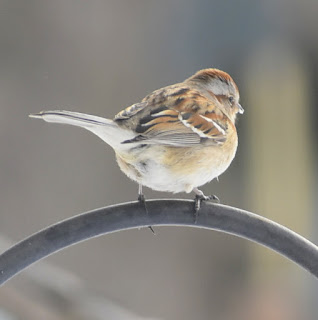 We spent some time outside even though it was cold to see some things that had changed since the fall when we were regularly going out to explore the land.

Even though initially Sophia and Olivia felt the landscape was rather bland with only shades of brown and dull green, there ended up to be much more color and texture than we anticipated.


“There is enough to see outside in winter to satisfy any poet.
In fact, winter may be even better because
there aren’t so many things going on in nature
that they crowd each other out.
It’s easier to notice what’s there.”
~ Charlotte Mason volume 1, page 86 ~

I was curious if we could find most of the colors of the rainbow - plus the neutral colors - during our time outside on January 26th. Here's how we did:

Green - pine trees. The pine trees don't look green, but they are. I happened to look up and see a hawk flying overhead. Was surprised that when I took the picture that the hawk was in between the tops of the pine trees. 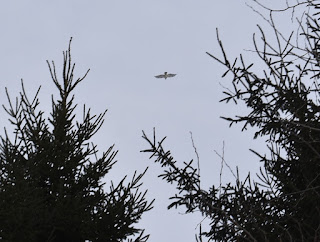 Brown - weeds and dead pine needles; pine cone; and cattails. This cattail was on the back part of the property, to the north of the mini-pine tree forest. The pine cones were under some trees that are in the west pasture. There were lots of rabbit tracks under the trees and around the pine cones. 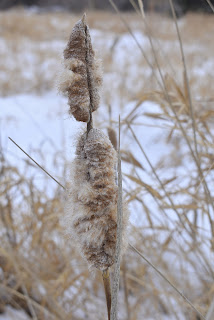 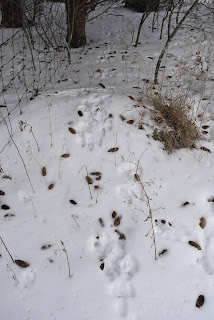 Looking at the birds, I saw many American Tree Sparrows. 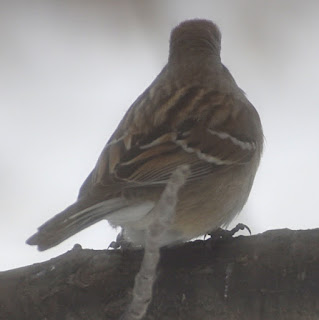 White - snow. These are some tracks in the snow that are leading to a branch that is partially-buried. The tracks went to the side of the branch where there was some shelter from the weather. 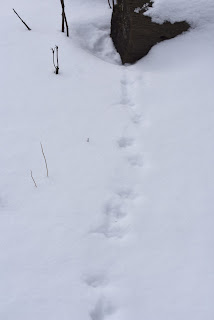 Gray
The gray squirrels are prolific this year. They like the corn that I put out. The goal is to keep them away from the more expensive birdseed. In concept, it works...in real life, not so much. 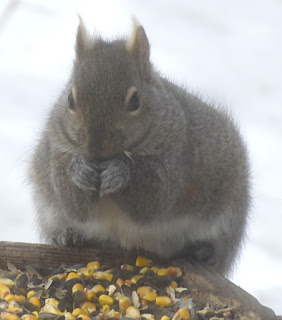 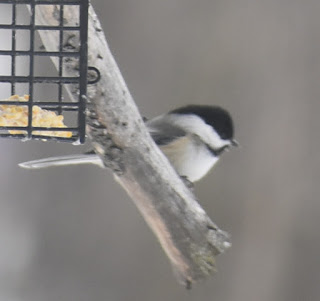 The colors we didn't find were red, orange, yellow, blue, indigo, and purple - all the vibrant colors we would see in the Spring, Summer, and Fall. That being said, on other days we will see red on male cardinals, orange on the beaks of female cardinals, and blue in the sky and on blue jays. Sunrises and sunsets would show any of the colors we didn't see also.
That wraps up our nature study about winter, snow, snowflakes, birds, and colors during the winter.
Posted by Harvest Moon by Hand at 9:00 AM

Fascinating snow experiments.
I can't tell my small birds apart but I think they are mostly some kind of sparrow. They are together in a big flock of 30 or 40 of them in the winter. :)