On May 9, 1913, Flavia Arlotta was born in Naples into a cosmopolitan family. Her father Ugo was wealthy and her mother was a Russian sculptress. At the age of 17, Flavia went to live in Florence to study painting. 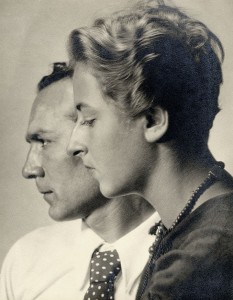 Flavia "participated in various collective exhibitions in the 1930s and 1940s at Palazzo Strozzi in Florence and the Galleria d'arte Moderna in Rome. In 1939 her father bought her the studio house in Via dell'Osservatorio which remained the well-loved residence of Flavia and Giovanni for the rest of their lives.

She painted still lifes, portraits, and landscapes, and had three solo exhibitions in Florence in 1979, 1984, and 1998. Besides her art, Flavia dedicated her life to the conservation of Florence and the environment.

Flavia died in Florence on December 13, 2010, in her house in Via dell'Osservatorio.

Below are five of Flavia's pieces that Olivia observed. Without looking at the pieces, she recalled different aspects of each one as noted. 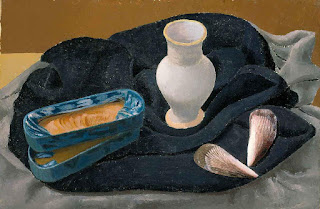 Natura Morta con Scatola di Datteri
(Still Life with a Date Box)
Olivia remembered:
- There are two pieces of cloth - one is gray and the other is navy blue.
- There's a vase, two halves of a shell, and two blue rectangle-shaped boxes stacked on top of one another.
- The vase is small and white. The boxes - they look like they are light brown to yellow in the center - and it looks like there is a wrapper on top that has been broken.
- The shells - they are kind of long - they are almost like oyster shells of some sort.
- You can see all the creases and folds of the fabric.
- The vase is narrow at the top, then it gets wider, and then it gets narrow again.
- Most of the background is the fabric. To the left, you can see a light brown table. The wall or flooring is a darker brown or tan.
- It almost looks like she used pastels because there are white spots.
- The top of the boxes looks like it has a pattern that was done in white.
- It was a pretty simple picture.
*~*~*~*~*~*~*~*~*~*~*~*~*~*~*~*~* 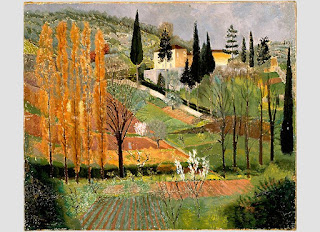 Il Campo Degli Hildebrand a San Francesco di Paola
(The Hildebrand Orchard at San Francesco di Paola)
Olivia remembered:
- This picture reminds me of the Italian countryside. You have lots of trees and what looks like little plots of vineyards and then you have some houses with walls surrounding them.
- The trees are all skinny and tall trees. They aren't very wide.
- The houses are very normal, rectangle-shaped houses. There isn't a lot of detail on the houses.
- Some of the trees have white flowers or leaves on them...so I feel like this is maybe springtime or maybe late spring because some of the trees are still bare as well.
- Whatever is in the field is low to the ground - like they are shrubs.
- The sky is blue, but there are light grayish clouds, and some of the same colors can be seen in the background in the plots that are further away.
- The trees on the left are tall and they look like they have gold leaves...so I don't know if that's the color of the leaves or something...I'm not sure.
- You can see a little bit of a road leading to a house in the distance.
- It also seems kind of hilly.
- You can't see very much of the sky.
- The colors are greens, browns, and white. Nothing is eye-popping. All the colors go well together.
*~*~*~*~*~*~*~*~*~*~*~*~*~*~*~*~* 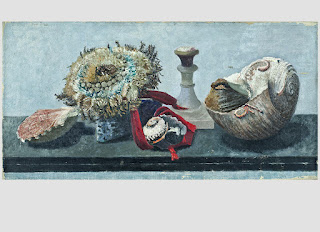 Natura Morta col Nastro Rosso
(Still Life with a Red Ribbon)
Olivia remembered:
- She seemed to have a thing for shells. Again, she has shells in this picture.
- There are two shells - one on the right and one on the left. In between the shells, there is a vase with flowers, and a red ribbon with what looks like more shells in it.
- All of the colors are blues and grays. The color that stands out the most is the red ribbon.
- The flowers in the vase look like they are arranged to be a sea anemone.
- The vase they are in looks like it has blue swirls all over it.
- Everything looks like it is on a blue shelf against a wall.
- There looks like there are two shells on the ribbon and they are darker.
- There also looks like there is something coming out of the big shell on the right.
- The flower arrangement looks like it is more than one flower. It kind of looks like a sunflower except it is not yellow. It is dead. It is made out of more than one flower too.
*~*~*~*~*~*~*~*~*~*~*~*~*~*~*~*~* Flori de Campo
Wild Flowers
Olivia remembered:
- In the picture, there is a single vase filled with flowers. There's several of them at the base of the vase that look like they are little daisies.
- There's light coming in from the left of the picture - showing there is possibly a window, even though you can't see it.
- All the flowers in the vase are kind of hanging over, like they don't have strong stems to keep them upright.
- Some of the flowers in there are roses, daisies, there's one that looks like a hyacinth, there are some yellow flowers and white ones, and some grass blades and ferns in there too.
- The vase looks like it is silver, but it is actually made out of glass since you can see some of the stems.
- One of the yellow flowers on the left looks like a little yellow butterfly.
- The table looks like it is covered with a tablecloth that is white/light gray.
- The wall behind the vase is blue and kind of looks like it has a swirly texture to it...or just the way she painted it.
- For such a small vase, there is a lot of negative space around it.
- There's not a lot to these pictures. They are very simple - not super distracting.
*~*~*~*~*~*~*~*~*~*~*~*~*~*~*~*~* 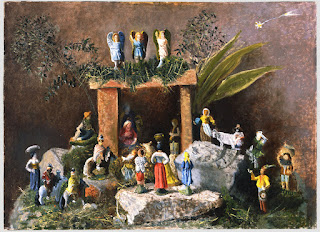 Presepe Dipinto Per Giovanni
(Christmas Creche Painted for Giovanni)
Olivia remembered:
- This picture is like a very chaotic setup of a manger...like we set up for Christmas.
- There's a little rectangle/square in the middle on a platform surrounded by some rocks. There are people and animals all over the rocks.
- On top of the manger, there's some grass or something. Standing on top of the grass are three angels - one has blue wings, the second has yellow or gold wings, and the third has green wings. There are also like these big leaf plants that look like palm leaves....just a little thicker.
- To the left of the angels, there is a more leafy branch that is trying to be a tree. Then right under the tree, there are some people who are standing around - the three wisemen - and they all have gifts. You can tell they are wisemen because they are on donkeys.
- Next to them, there are some more people with gifts and some people are carrying gifts on their heads. They are in urns or jars.
- On the big rock there's a woman - or at least what I think is a woman - and a sheep and then there's a boy behind the sheep who I think is the shepherd.
- There's some more people behind them, a little lower down, on a rock.
- In the manger, you have Mary, Joseph, and baby Jesus. Baby Jesus is facing towards the wisemen. Joseph is standing in the back like he always is, but you can't see his face. There's a blue glow over his face - like he is a ghost.
- Mary is in the classic pose with her hand over her heart.
- In the upper right corner is a star. It's suppose to look like a shooting star, but it looks more like a shooting daisy.
*~*~*~*~*~*~*~*~*~*~*~*~*~*~*~*~*
Posted by Harvest Moon by Hand at 11:42 AM

Never heard of her. You find the most interesting people to study. I like her wildflowers the best. :)