Felix Mendelssohn was born Jakob Ludwig Felix Mendelssohn Bartholdy, and became a German composer, organist, pianist, and conductor of the early Romantic period. He was born on February 3, 1809, and died on November 4, 1847. 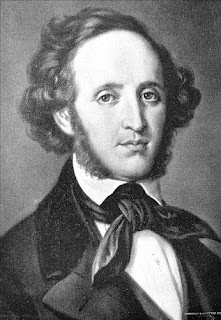 Mendelssohn's compositions include piano music, organ music, concertos, symphonies, and chamber music. According to Wikipedia, "His best-known works include the overture and incidental music for A Midsummer Night's Dream, the Italian Symphony, the Scottish Symphony, the oratorio St. Paul, the oratorio Elijah, the overture The Hebrides, the mature Violin Concerto, and the String Octet. The melody for the Christmas carol Hark! The Herald Angels Sing is also his."

Mendelssohn was born into a prominent Jewish family and was a grandson of the philosopher Moses Mendelssohn. According to Wikipedia, "He was brought up without religion until the age of seven, when he was baptized as a Reformed Christian. Felix was recognized early as a musical prodigy, but his parents were cautious and did not seek to capitalize on his talent."

He enjoyed success early in his career in Germany, and revived interest in Johann Sebastian Bach's music, notably with his performance in 1829 of the St Matthew Passion. He was well-received in his European travels as a conductor, composer, and soloist; his ten visits to Britain – during which many of his major works were premiered – were a significant part of his adult career.

- I feel like if someone were going to play it during a wedding, it would be during the recessional - it is celebratory.

- You would probably hear a very short part of the song (during a wedding).

- It's nice. You can definitely tell that something big is going to happen or did happen.

- I can definitely see why it is called "Sweet Remembrance" - just that feeling and sound that someone is thinking about a happy memory.

- It sounds like it is just the piano. I don't hear any violin.

- I don't think I would choose to play this piece on the piano.

- Sounds like something you would play at an outdoor party.

- Also sounds like a piece that someone could dance to.

- I liked this one, but I think I liked "Sweet Remembrance" better because of the overall feeling.

War March of the Priests

- This should be interesting (when I told her the title of the piece).

- At 3:45 - this feels like the ending. It reminds me of something I would hear in a Tom and Jerry cartoon.

- That was a long ending (about 1 minute and 45 seconds). It needed that amount of time. Although it was the ending, you could hear a part repeated over and over again.

Posted by Harvest Moon by Hand at 2:48 PM

I do think some of his pieces have been used in cartoons.
I've never heard all of the wedding march--LOL!