The Life & Adventures of Santa Claus

This Christmas I read The Life & Adventures of Santa Claus. It had been on my list for a long time; and I wish I would have read it sooner to Sophia and Olivia. I think they would have enjoyed it when they were younger. 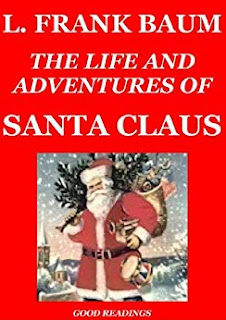 The book is written by Lyman Frank Baum who was born in Chittenango, New York, on May 15, 1856. Over the course of his life, he raised fancy poultry, managed an opera house, sold fireworks, opened a department store, and an edited a newspaper before turning to writing.

In 1900, he published his best known book The Wonderful Wizard of Oz. Eventually he wrote 55 novels, including 13 Oz books, plus four “lost” novels, 83 short stories, more than 200 poems, an unknown number of scripts, and many other writings. Baum died on May 6, 1919.

The book tells a very different history of Santa Claus that involves fairies, immortals, and characters that aren't typically told in the mainstream Santa Claus story.

Some things that stood out from the book:

"Everything perishes except the world itself and its keepers. But while life lasts everything on earth has its use. The wise seek ways to be helpful to the world, for the helpful ones are sure to live again."

"Yet every man has his mission, which is to leave the world better, in some way, than he found it."

"I must devote myself to the care of the children of mankind, and try to make them happy."

"He brought toys to the children because they were little and helpless, and because he loved them. He knew that the best of children were sometimes naughty, and that the naughty ones were often good. It is the way with children, the world over, and he would not have changed their natures had he possessed the power to do so. And that is how our Claus became Santa Claus."

"It is possible for any man, by good deeds, to enshrine himself as a Saint in the hearts of the people."

Posted by Harvest Moon by Hand at 8:42 AM

I had no idea he wrote so many books--let alone this one. I have not searched for information on authors much and this makes me curious about other authors, too. Thanks. :)