For the April Photo Scavenger Hunt on Swap-Bot, there were six items to look for and photograph.

From Friday, April 13th through Monday, April 16th, we received 18 inches of snow. During the heaviest snowfall - on Saturday afternoon, flocks of birds were at the feeders eating the mixture of black sunflower seeds, dried fruit, thistle seed, and suet. 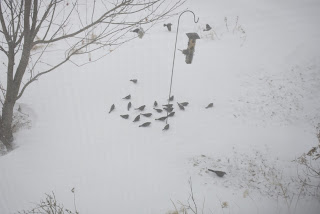 If you look closely at the photo above, there are a couple of birds flying - they are in the upper central part of the photo. The rest are on the ground or on the feeder.

Something you received from someone special

When I was in early-elementary school, my grandpa on my dad's side and step-grandma would visit us when we lived in Minneapolis. They would stay for a period of time and then one morning I would wake up and they had left early to go back to Illinois.

I was always sad that they went back home. However, they would always leave a little gift for my brother, sister, and me. One time, they gave me a book, Nice Is. 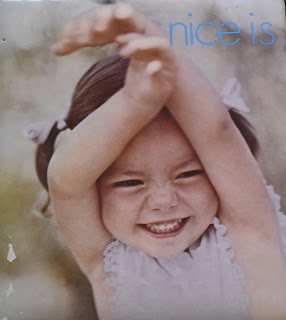 They wrote my name and their names on a piece of paper and taped it to the front page. 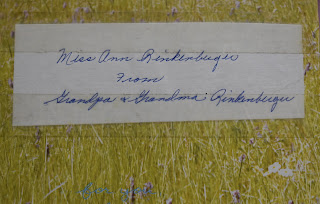 Each page had a short written description of nice things on the left side and a photograph on the right side. 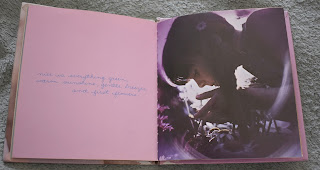 Although I haven't read the book in years, just having it on my shelf and knowing it is there is a reminder of my grandparents. It is a visual memory of how much I loved them and the time we were able to spend together.


I was at Wal-Mart getting dog food when I realized that the fabric and craft area was in the next aisle. As I looked at the many bolts of fabric, I found a paisley one. 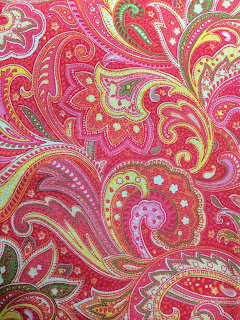 Paisley is a difficult pattern to find these days. The fact that there's only one bolt of fabric out of the hundreds that were there, shows it's not in high demand. Maybe one day it will come back in style.

Something organized by color


My Prismacolor colored pencils are well-worn...though they are arranged by color. As I was looking for something that wasn't overly-used and still presentable, I came across a set of Prismacolor watercolor pencils that I still haven't used. 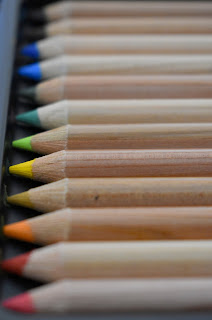 They are all sharpened in the same manner...ready to go. I always enjoy looking at colored pencils when they haven't been used. They are so orderly, precise, and full of potential.

Sophia made heart-shaped cookies on April 13th for the Festival of Cultures. They were made with sweet potatoes and raisins; and weren't overly sweet. The cookies were a recipe from Malawi. Sophia and Olivia are in the process of collecting 1,000 books and raising $500 to ship them to a school that serves 465 orphans and vulnerable children. 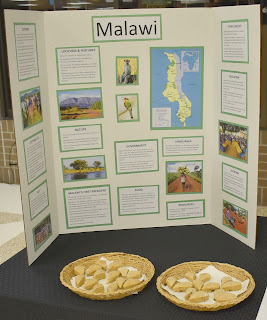 The plates of cookies were gone by the time the event was done, the girls had collected more books, and raised $38 to purchase new books and/or ship them to Africa.

I couldn't find something that was crushed, so I crushed up some newspaper. While I was doing it, Scooby was intrigued with what I doing. So, I put the crushed up newspaper ball in front of him. He sniffed it. 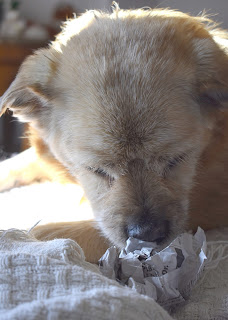 Then, finding it wasn't that interesting, turned away from it. That's when Cooper came in to steal the newspaper ball. 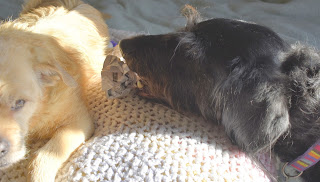 He thought it was really fun to get the newspaper all wet by putting it in his mouth and then ripping the crushed newspaper into little pieces in less than a minute. 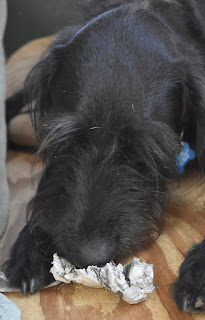 I don't think I'll be offering newspaper again as a toy for Cooper. He needs something much more durable that he can't rip apart so quickly.
Posted by Harvest Moon by Hand at 7:27 PM

Your log is most interesting and your girls are beautiful. The Lucia blog caught my eye, how nice and different for the seniors. Looking in for A to Z.