During 2018, I am working towards the following goals. Some I've done in the past and others are new ones for this year. This update is for January 1-April 3, 2018:

It's been a frigidly-cold winter here that started out with double-digit temperatures below zero. It makes for a challenging time to be outside. 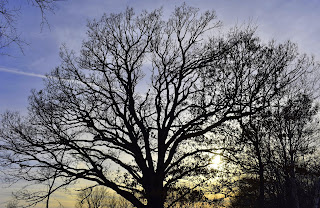 There is still beauty in the starkness of winter.
(Taken on February 16, 2018.)
During the first quarter of 2018, I've taken the dogs on our regular walks when it has been warm enough for them to be outside for a prolonged period of time. They enjoy smelling the tracks left in the snow by wildlife - like deer, turkeys, fox, and this raccoon (pictured below) that has made our farm its home. 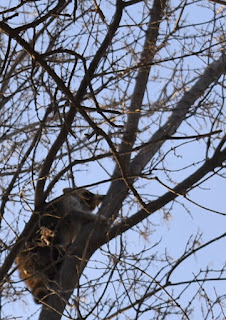 Raccoon in the tree in the west pasture.
(Taken on March 3, 2018.)
Sophia, Olivia, and I went to Franconia Sculpture Park on March 9th. We've never trudged through the snow there as we explored the sculptures, so it felt like a new hike in the sense that we were seeing some new sculptures as well as how they looked in the snow that day. 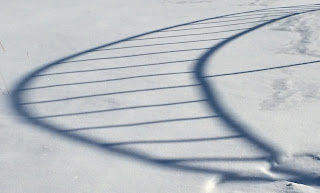 The sun was low in the sky, so the shadows that the sculptures and weeds created on the snow were intriguing to us. 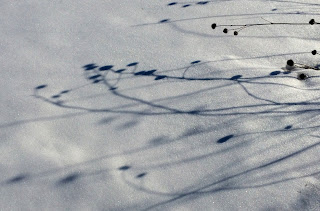 We're looking forward to going back in the spring when there's no snow to make hiking a bit easier.

I read Flights of Fancy during January and February. I thought this was a new book that I had not read. Interestingly, I had read this book before in March 2014. Apparently it wasn't that memorable. 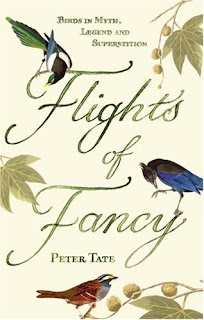 There were a lot of facts about birds as they appear in myths, stories, and the Bible. However, many of the birds don't live in the United States since the book was written by a British ornithologist. The majority of the birds are European ones.

I am working on An Eagle Named Freedom and am three-quarters done with the book. 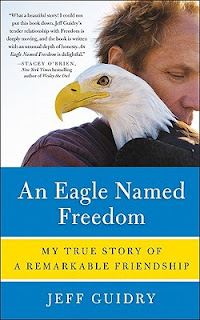 It's one that I'm enjoying and am happy to have found it.

So, by the end of May, we'll see five new state parks which is exciting! Hopefully we'll see more state parks during the summer that we haven't yet seen.

4. Visit 2 nature centers that I haven’t visited before. (0 of 2 visited)
The weather has been so cold this winter and spring, that the thought of going to a state park and exploring a nature center has been far from my mind. 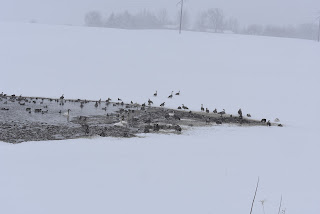 One of Sophia's photos from the car.
It was a cold day on April 3rd, and we noticed
a huge flock of ducks, geese, and swans at a small pond in a field.
Sometimes we stop on the side of the road and
take photos of the wildlife we see.
When it is cold, snowing, and/or sleeting - sometimes being in a car
is the best (and warmest) place to enjoy nature.
That being said, I've looked online and found that there's a photography club that meets at Tamarack Nature Center. Starting next month, there are monthly dates that I'd like to go there: May 19, June 16, July 21, and August 18 from 10 a.m. - noon. The website says, "Improve your nature photography with new techniques, master your equipment and participate in photo-related projects. The photography club is offered in partnership with the 3M Camera Club."

5. Do 1 entry per month in my nature journal. (4 journal entries done for January and February collectively; none yet for March)

In January, I did two entries. One was about winter colors. 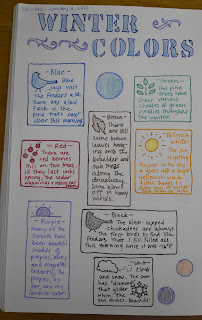 The other one I did in January was about birds I was seeing at the feeder. 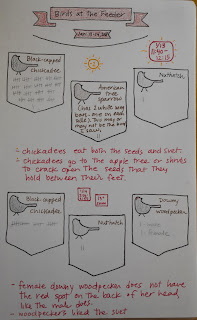 During February, I did a two-page spread about turkeys in the wild. 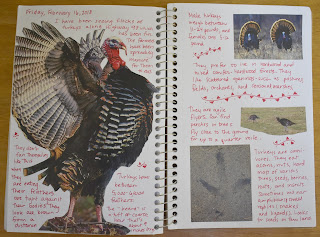 I've been seeing lots of turkey tracks along the roads in the ditches and leading into the fields and woods near our home.  This is exciting because when we first moved to the farm in 1995, the turkeys were not in our immediate area. They have slowly made their way to the area indicating that there's enough food and shelter for them.

I also did a two-page spread about eagles since we had been seeing a few of them around the area. 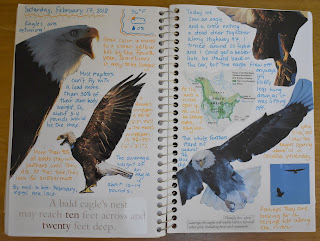 I still need to do entries for March. The sandhill cranes returned on March 20th. 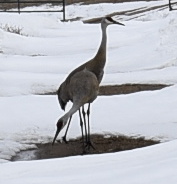 They are such graceful and beautiful birds that migrate south each winter and return in the spring.

Their unusual call is a sure sign that spring is returning (although it sure doesn't look like in these photos).
6. Go on a camping trip to a new location. (0 of 1 camping trip taken)

I booked a camping trip in a camper cabin to Forestville State Park in May.

7. Plant on our nature trail 10 trees and shrubs that are native to Minnesota. (Do this after assessing what types of trees we have at the farm and aiming to have at least 25 different varieties after everything is planted.) (0 of 10 trees or shrubs planted)

I did not do anything with this goal since the ground is still frozen.

It is still too cold to do anything at the state parks. Most parks don't even have their summer schedule set up yet.

In lieu of going to a state park, Sophia, Olivia, and I did go to the White Bear Center for the Arts for an outdoor celebration they had on January 27, 2018.

In addition to having fun on the pottery wheel and looking at the art indoors, there were dog sled rides that Olivia went on. 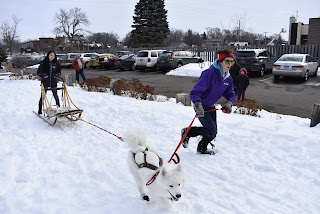 There were ice and snow sculptures to enjoy outdoors. 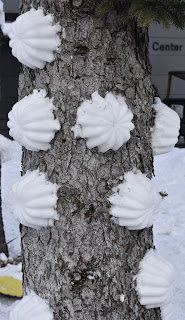 It was a fun way to spend the afternoon.

On March 3rd, we hosted a One Stop Donation Drop at the community center. There were 26 non-profit organizations represented there including the Wildlife Science Center. They brought a hawk which was interesting to see up close. 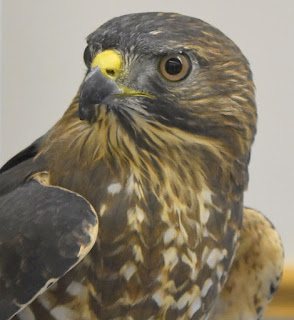 The coloring and pattern of the feathers was stunning. It was such a treat to be able to see a raptor up close.
9. Have 4 picnics when the weather is pleasant and we aren't battling with mosquitoes. (0 of 4 picnics done)

I had hoped that we would have nice weather in March to do a picnic or two. No such luck. After a very brief "warm" spell that got to the upper 40s, the temperatures plunged back down to the single digits during the end of March and early-April.

We then had back-to-back 6" snowfalls. 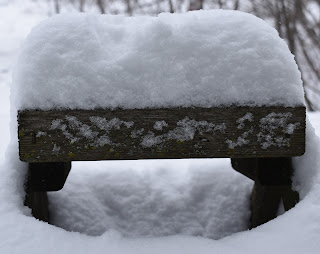 One of the bird feeders covered in snow from one snowfall.
It's so important to feed the birds -
especially those newly-migrating back to the area -
who need food yet nothing is available yet in the wild.
(Taken on March 31, 2018.)
So, no picnics in this cold and snowy weather!

10. Walk on 4 outdoor labyrinths. (My eventual goal is to have walked on the same number of labyrinths as my age. Obviously, I have a long way to go to reach this goal.) (0 of 4 labyrinths walked)

The majority that are close-by seem to be on grass or indoors. Will need to wait until late-Spring and Summer to work on this goal. 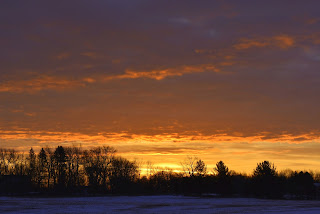 Sunrise on March 25, 2018.
This is looking northeast from our front yard.
Posted by Harvest Moon by Hand at 6:33 AM

These are awesome goals! I love your journal and am inspired to try something similar...I've got to think about it.
https://melaniecrousesblog.blogspot.com/2018/04/l-is-for-more-or-less.html