Hobbies that Begin with "U" - Blogging from A to Z Challenge

*~*~*~*~*~*~*~*
As we move towards the end of the alphabet, there are sometimes fewer hobbies that begin with a particular letter. The letter "U" is one such example. Sophia and Olivia have done one hobby that begins with the letter "U": urban exploration.


The two main urban areas near us are St. Paul and Minneapolis. In St. Paul, we have enjoyed going to the Como Conservatory. It's an oasis of beauty within the city. We like seeing the animals there as well as the plants. 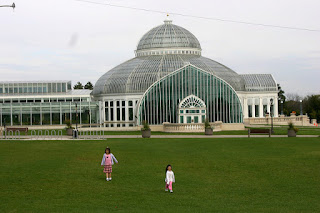 October 17, 2007 - Como Conservatory
One year, I took the girls to where my grandma (my mom's mom) used to live. I used to visit here quite often - sometimes getting to spend one-on-one time with my grandma which I loved doing.

The home has been updated and looks different. It used to be an all-white house. The porch on the front is one in which all the windows would be opened in the summer. We would sit out there because the wind would go through the porch and keep us cool.

We'd have freshly-squeezed orangeade that my grandma would make (a combination of orange juice and lemonade that she made from fresh lemons and oranges, sugar, and water). 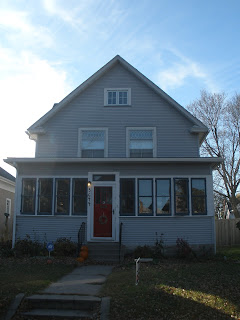 October 21, 2010
We have gone many times to Minneapolis - both the downtown area and the immediate neighborhoods. 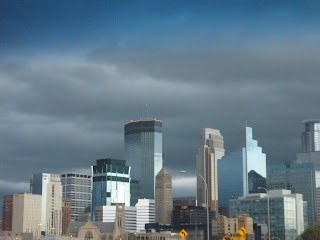 May 21, 2011
When we are traveling, we often will do urban exploring. In the photo below, Olivia is holding her penguin stuffed animal as we rode a trolley through Boston. 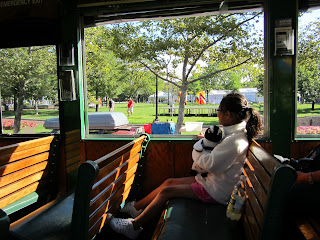 September 10, 2011
We were able to stop at various locations, get out, and explore different parts of the city. 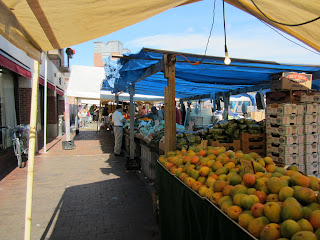 September 10, 2011
Our nighttime view of Boston from our hotel room was beautiful. 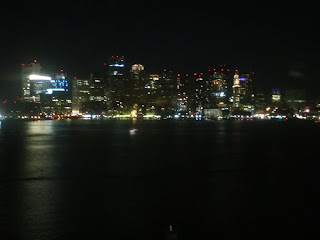 September 10, 2011
In March 2012, I took the girls to the area where I grew up from birth to eight years old (the Camden neighborhood in Minneapolis). I showed them one of many schools that I attended. Below is Loring Elementary School. 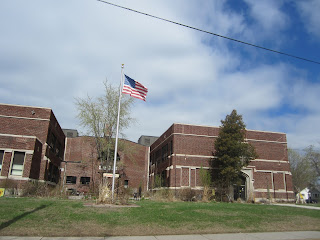 March 28, 2012
I showed them Patrick Henry High School - about a half a block from where we lived - where my dad worked as a social worker. 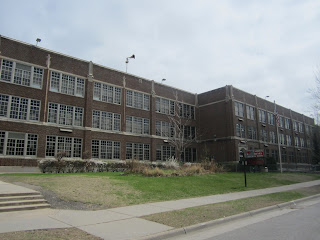 March 28, 2012
We went by the first house I lived in at 4221 Morgan Avenue North. It used to be a pink house with pink geraniums under the living room window (on the left side of the house). Where there's a garden in the front yard, there used to be a beautiful maple tree with dark leaves - almost purple leaves. 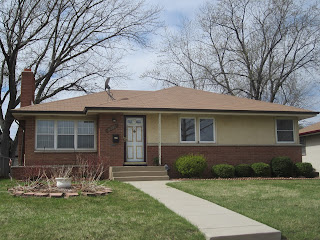 March 28, 2012
A couple of months later, we went to downtown St. Paul. We visited the Cathedral of St. Paul where my dad was ordained as a deacon. 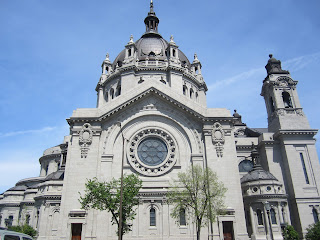 May 4, 2012
When we visited, there's a little chapel area dedicated to Mary. The statue had a floral head wreath and there was a pretty display of flowers in front of the altar. It may have been for a special feast day in honor/memory of Mary. 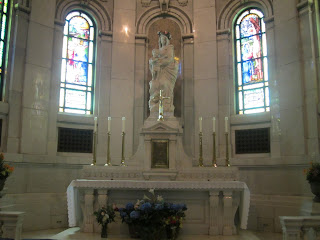 May 4, 2012
Olivia, Sophia, the girls' aunt (Mary...my sister), and I went to eat at El Burrito Mercado in the Hispanic section of St. Paul. It was the day before Cinco de Mayo so things were decorated and festive in the store and restaurant. 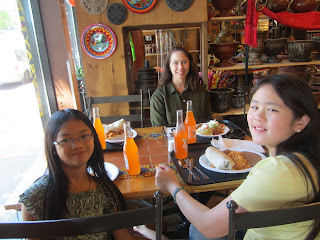 May 4, 2012
We went to the bakery and the girls picked out a treat to take home. 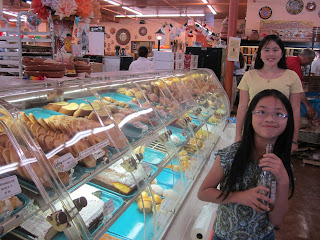 Another place we've visited several times is the Guthrie Theater which overlooks the Mississippi River and the Stone Arch Bridge. It's right in the heart of Minneapolis. 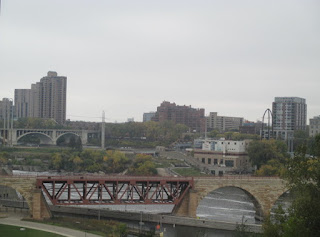 October 8, 2015
We also went on a tour of the costume warehouse and rental store for the Guthrie Theater and Children's Theater. We had fun looking at the creativity of the costumes and the talented work of the designers and seamstresses. 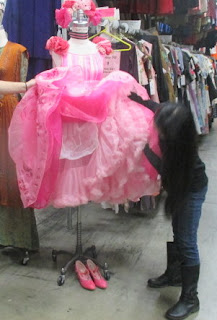 October 8, 2015
Another fun activity we did was visit WCCO-TV which is in downtown Minneapolis. We were able to see the studios where the news and weather are broadcast; and see the production and editing studios. It was a great behind-the-scenes view of the television station. 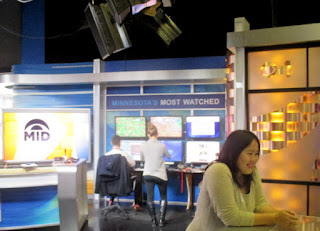 November 19, 2015
Within a short driving distance of downtown, is a food co-op that has been there for decades. We went on a tour of the co-op and bought different food to try. Sophia is grinding peanut butter for us to bring home. 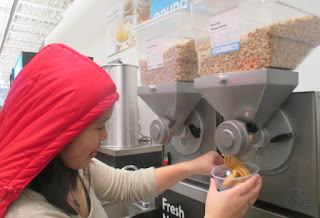 November 19, 2015
A fun place we explored was the Textile Center in St. Paul. The girls enjoyed looking at the gallery which had a variety of artist-designed clothes, wall hangings, and sculptures. Afterwards, they did a felting project in one of the studios. 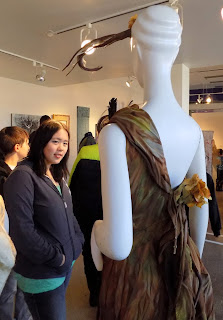 February 25, 2016
A long time ago, the glass fish sculpture in the photo below was at the Walker Art Center's sculpture garden in a conservatory. It was moved to the Weismann Art Museum on the University of Minnesota's campus on the West Bank.
The girls and I visited the museum in January 2017 to see the many sculptures, paintings, and ceramic pieces. 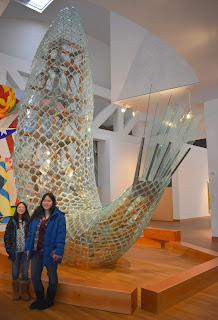 January 12, 2017
Olivia and I visited the Phoenix Art Museum in July 2017, and were able see a special exhibit about the Samurai. There were outfits for people as well as horses. It was a fascinating exhibit. The museum is in the city. Normally, it would probably be quite busy. However, since we visited it on the 4th of July, the downtown area was quiet. 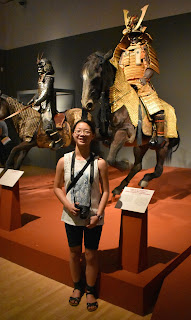 July 4, 2017
On the same trip, we visited Frank Lloyd Wright's home in Scottsdale, Arizona. At one time, it was in a remote part of the desert. Now, it is right in town - though it does have a substantial amount of land that keeps it semi-isolated from the city. 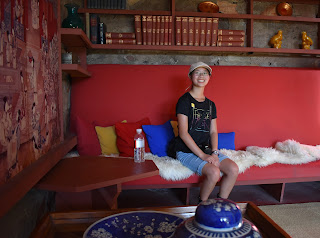 July7, 2017
What was so exciting about taking a tour of the home was that we could sit on some of the furniture and see what Frank Lloyd Wright's designs felt like from a practical standpoint. Everything we sat on was so comfortable. It was like he intuitively knew how people sat and how the furniture could help them relax and be comfortable. 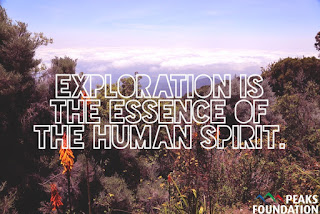 Wow, I'm sure I would never guess anything for the U letter :)
I like your pictures, they show nice places as they are, and it is much appreciated.
Kind regards from Hungary and have nice last letters of the challenge :)
Szvetlana

This was a great hobby for the letter L, and very close to my heart since my son moved to Christchurch New Zealand today. He's never lived in a big city before, and oddly, I'm more worried about that than I was about him moving to New Zealand a few months ago! I wish I'd given him more skills in this area, but I'm sure he'll be find! Melanie's Stories

Nice pictures. You gals sure do have fun.

Nice photos for the A-Z. You have done a lot of traveling.

You've been so fortunate to have access to all those enriching experiences. I've enjoyed seeing your photo trips :)
Stephanie Finnell
@randallbychance from
Katy Trail Creations

You and your girls are very creative.
https://antoinettetrugliomartin.com/2018/04/25/w-is-for-wine/

Great word choice - enjoyed your travels and the girls will have great memories with you. https://everyonehasafamilystorytotell.wordpress.com I wrote All About Nancy Drew!