In selecting books that I wanted to read this year for the Read 52 Books in 52 Weeks challenge, I drew from many sources. Somehow I  came across The Diving Bell and  The Butterfly  by Jean-Dominique Bauby. 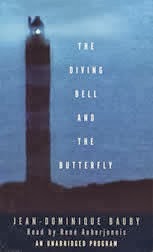 This memoir is of a man afflicted by locked-in syndrome. Basically, it means that the author's body was completely paralyzed with the exception of his left eye, yet his mind was unimpaired by the rare stroke he had to his brain stem.

He spent 20 days in a coma, only to wake in this state of being unable to move, care for himself, and express himself as he had done less than a month before. Thanks to his speech therapist, he learned to communicate by blinking to select special letters one by one so that he could not only express his needs on a day-to-day basis, but also compose The Diving Bell and The Butterfly.

This book is of particular interest because strokes have been prevalent in my family. My paternal grandmother was the first person who I knew had a stroke. She had a massive stroke and never regained consciousness. This happened six weeks after I was born.

As the author wrote, in the past strokes of these nature (like my grandmother experienced at 54 years old) were known as "massive stroke[s], and you simply died. But improved resuscitation techniques have now prolonged and refined the agony. You survive, but you survive with what is so aptly known as 'locked-in syndrome.' Paralyzed from head to toe, the patient, his mind intact, is imprisoned inside his own body, unable to speak or move. In my case, blinking my left eyelid is my own means of communication."

My maternal grandmother also had a fatal stroke, but she was 92 years old. She was in a coma like the author was, yet for only a few days - not 20 days.

Currently, my mother has been experiencing TIAs (mini-strokes). She had one in September, two in January, and another on Friday, February 7th. She also had a full-blown stroke last month in which 7 mm of her brain is affected. This is most apparent in her short-term memory; and it will continue to worsen through vascular dementia (as a result of the stroke).

At any rate, thinking about these experiences that have happened in my family - as well as the ones that I see at the nursing home where Sophia, Olivia, and I volunteer - made this book particularly relevant and intriguing.

The author speaks of routine cares that he no longer is able to do on his own - including bathing. He reflects on this "total lapse into infancy" at times with fondness for being cared for and at other times for being "unbearably sad....My weekly bath plunges me simultaneously into distress and happiness....Rarely do I feel my condition so cruelly as when I am recalling such pleasures [from an earlier time in my life]."

Locked-in syndrome has been written about before. In fact, the author notes, "Noirtier de Villefort, a somewhat sinister character in The Count of Monte Cristo [is] described...as a living mummy, a man three-quarters of the way into the grave....[T]his profoundly handicapped creature summons up not dreams but shudders. The mute and powerless possessor of the most terrible secrets, he spends his life slumped in a wheelchair, able to communicate only by blinking his eye: one blink means yes; two means no."

The author also writes about how his hearing has been affected by his stroke. One ear no longer can hear, while the other distorts and magnifies any sound - not only in his immediate surroundings, but those in the hallway and other rooms. The door to his room must be closed at all times to afford him moments of peace and quiet.

As he wrote, "When blessed silence returns, I can listen to the butterflies that flutter inside my head. To hear them, one must be calm and pay close attention, for their wingbeats are barely audible. Loud breathing is enough to drown them out. This is astonishing: my hearing does not improve, yet I hear them better and better. I must have butterfly hearing."

The Diving Bell and The Butterfly is a fascinating look into the world of someone trapped in his body, and the challenges and feelings that accompany that journey. The author faced his difficulties with strength, determination, and reflective insight that made this book a very worthwhile read.
Posted by Harvest Moon by Hand at 6:33 AM

I never thought I would like this book, but your description and your experience with it encourages me.

I saw this movie years ago and it was excellent, as I recall. You never know what life will hand you.