For the 25th day - Letter Y - I am focusing on Yellow-Rumped Warblers and Yo-Yos.

- Yellow-Rumped Warblers forage in the outer tree canopies at middle heights. They often will catch insects in midair. In winter they spend lots of time eating berries from shrubs.
- The birds often travel in large flocks. 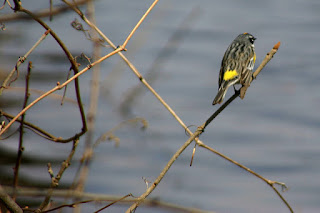 Females build the nest, sometimes using material the male carries to her. The nest is a cup of pine needles, twigs, grasses, and rootlets. She also may use horse, deer, and moose hair, moss, and lichens.

She lines the nest with fine hair and feathers; and does so in the way that they curl up and over the eggs.

The nest takes about ten days to build. It's roughly 3-4 inches across and 2 inches tall when finished.

Yellow-Rumped Warblers cling to a tree's bark surface to look for hidden insects more than many warblers do. They also frequently sit on exposed branches and catch passing insects - similar to a flycatcher. 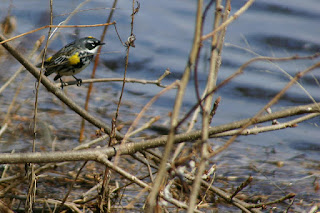 There's a website where you can log in birds that you see and the location where they are at. It was interesting to look at where the Yellow-Rumped Warbler has been recently - individual sightings and flocks of these birds.

Yo-yos can be the toy or made from fabric and used in various crafts. Some people make toys - using a stacked string of yo-yos for the body and limbs of the toy (e.g., cat, dog, clown). Others will use them in quilts, coverlets, table runners, clothing embellishments, and jewelry (e.g., bracelets).

Yo-yos are simple to make and are a portable craft. 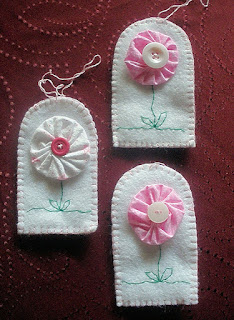 Most commonly associated with the 1930s and 1940s, yo-yos and yo-yo quilts of that era frequently mimicked hexagon mosaic patterns that were popular at the time, such as Grandmother’s Flower Garden. 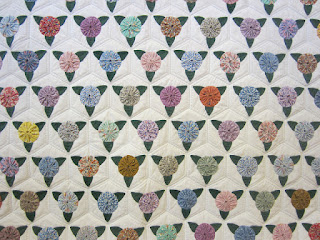 They also are a good way to use up small bits of fabric, which would have appealed to thrifty quilters who needed to make do with what they had during that time period.

In the process of going through the files that began with "Y," I recycled a half of a bag of papers. This brings the total up to 19 bags of recycling since April 1st!
Posted by Harvest Moon by Hand at 3:27 PM

Your bird photos are terrific.

When I think of yoyos, I think of the toys on a string with an axle and two discs that you spin up and down https://en.m.wikipedia.org/wiki/Yo-yo I haven't seen the word used in other ways.

I've seen those little fabric rosettes, but I didn't know they were called yoyos. This A to Z thing has been so much a learning experience for me. You blog has a different fascinating tidbit each day.

Oh, I loved learning about the warblers! Great pictures and info!