Earth Day, Easter, and Etiquette - Blogging from A to Z Challenge

For the fifth day - Letter E - I am focusing on Earth Day, Easter, and Etiquette.

Earth Day, which is celebrated on April 22nd each year, began in 1970. I was almost four years old at that time.

In the Earth Day file, I had information about how to take care of your lawn and garden. One of the articles was about what weeds are telling you:

=> Creeping Charlie - site is too shady or the soil is poorly drained.
=> Dandelions - the grass is too thin. 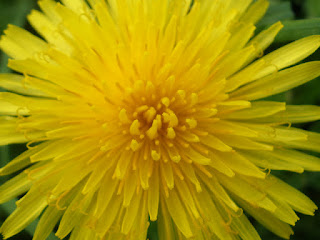 => Hawkweed - soil is low in nutrients.
=> Moss - the site is too shady or wet for grass to survive. 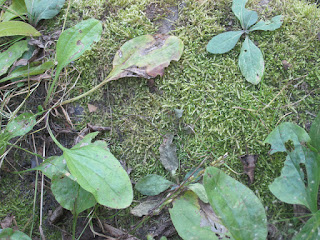 => Plantain - the soil is compacted or poorly drained.

Of those weeds, I know I have seen Creeping Charlie, dandelions, and moss here at the farm.


There also was an article from Lilipoh in the Earth Day file. The article was about doing a 100-mile diet. The article said, "The food we eat has traveled over 1,500 miles before reaching our plate....Two Canadians decided in 2006 to eat only food that had been grown within one hundred miles of their Vancouver home."

Although their website no longer exists, their biggest tip and suggestion was to shop at the farmers' market. 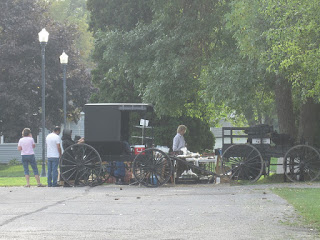 Amish farmers' market that Sophia, Olivia, my mom, and I went to
in southeastern Minnesota.
(Taken on August 25, 2012.)

They preserved some of their food that they purchased at the farmers' market so that they could enjoy it when the food wasn't growing locally.

Easter is coming up on Sunday, April 16th, this year. Looking through the file on Easter, I want to make this year:
=> Mounds Coconut Cream Eggs
=> A lamb or bunny sculpture made from Rhodes dinner rolls. I did this one year, and the girls still remember it. . 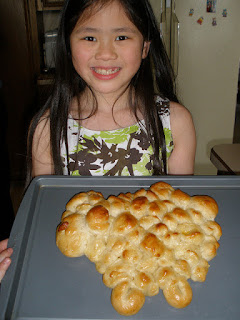 Sophia holding the lamb bread she made on her own.
We had made it before, but 2009 marked the first time
she made the lamb bread by herself.
(Taken on April 12, 2009.)

=> Ambrosia Gelatin Mold
=> Resurrection Buns. We've done this a few times when the girls were younger and they liked them. These are the rolls that you put a marshmallow in the inside of a Rhodes dough ball, roll in melted butter as well as cinnamon-sugar, and then let double in size. Bake for 15-20 minutes at 350 degrees.
=> Hot Cross Buns - on Good Friday.
=> Sugar cookies that we can make a hole in, bake, and then decorate. A ribbon goes through the hole and then the cookies are hung from pussy willow stems that are in a flower pot.
=> Maple Mustard Glaze Ham. The glaze is just 1/2 cup maple syrup and 2 tablespoons of Dijon-style mustard. You use the glaze to base the roasting ham every 10-15 minutes during the last 45 minutes of cooking. 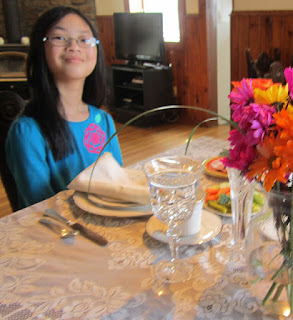 Olivia doing an etiquette lesson as part of homeschooling.
(Taken on April 4, 2013.)

In the Etiquette file, I came across a magazine clipping about housewarming traditions. There were some interesting traditions from around the world:

=> Swedes, Russians, French, and Germans bring bread and salt into a new home with the wish that the recipient's pantry will always be full. Bringing sugar symbolizes the hope for a sweet life.

=> Jewish friends attach a mezuzah, or small metal container holding a prayer for peace, to the doorpost of a new home.

=> Native Americans burn a smudging tool made from sage and sweet-smelling woods such as cedar or pine to purify a new home.  The smoke pulls negative energy from the house, making room for new, positive energy.

=> According to Ukrainian tradition, the "domovyk," or house spirit, moves with the family. Treats are set out in the new house so the domovyk feels welcome.

=> Celts burn colored candles to symbolize what is wished for in the new home: green for abundance, rose for peace, red for passion, light blue for healing, and purple for spirituality. 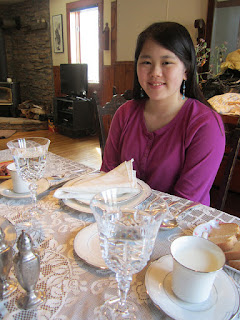 Olivia doing an etiquette lesson as part of homeschooling.
(Taken on April 4, 2013.)

I also had a clipping from the Star Tribune for a "Dear Amy" column. In it, one of the letter writers said she wanted to offer her thanks to the woman who instructed her son in politeness "by suggesting that he say at least three things in response to a person's comment before relating his own experience." 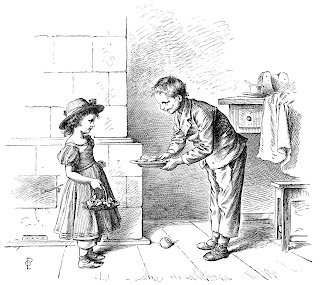 In the process of going through the files that began with "E," I recycled 1bag of papers and photocopies.

"E" files before (above) and after (below).
The bag is filled with papers to recycle. 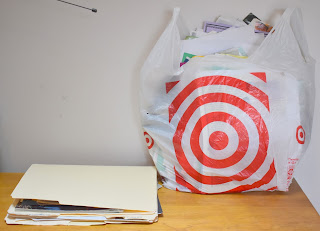 Also had some books and stickers that I'm donating to the thrift shop. All together, I've recycled 6 bags of papers; and, in the process, gained a lot of storage space.
Posted by Harvest Moon by Hand at 6:00 PM

What a good idea to discard alphabetically. I should try this through my house :))

Love the idea of being taught to comment on three things before launching into one's own agenda. This is the art of conversation. Interesting read. Visiting from A-Z Challenge :) Linda