Wart Hogs, Wetlands, and Wolves - Blogging from A to Z Challenge

For the 23rd day - Letter W - I am focusing on Wart Hogs, Wetlands, and Wolves. 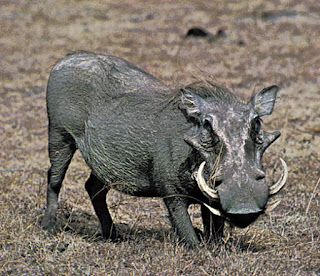 - They wallow in mud to keep themselves cool and keep off flies.
- They use burrows that were first made by aardvarks.
- Wart Hogs come out of their burrows running since lions like to hide nearby.
- They use their tusks and snouts to dig down for roots and other underground plant parts.
- The males' big "warts" may help protect their eyes in fights against other males.
- The warts are just thick lumps of skin.

- All wetlands: (1) have soils that developed in wet conditions, (2) are wet either above the ground or wet within 12 inches of the ground surface during all or part of the growing season, and (3) have vegetation adapted to wet soil conditions.
- They filter and absorb polluted surface water runoff before it enters lakes and rivers downstream.
- Provides a permanent or seasonal home to fish and wildlife. 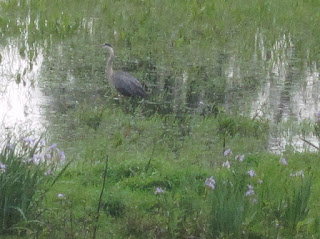 A heron in our pond in June 2013.
We have this area on the west side of the farm and
another type of wetland on the south part of the farm.

- Despite their benefits, wetlands have long been considered a nuisance and have been drained or filled for agricultural production or urban development. Lack of awareness about the benefits of wetlands and governmental policies that encouraged draining and filling are largely to blame for this loss.
- Until the settlement of Minnesota in the 1860s, about 18.6 million of its 53.6 million acres were wetland. Today, only half remain.


- Wolves live in packs; and each pack has two leaders, the Alpha male and Alpha female.
- Wolves can hear a watch ticking thirty feet away.
- Adult wolves weight from 57 pounds to more than 170 pounds, depending on where they live. 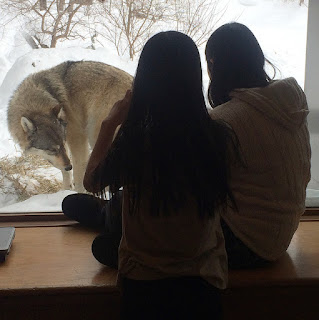 - Wolf puppies are born helpless, with their eyes shut and weighing about a pound. They will reach their adult size at about nine months old.
- Wolves have been known to travel for hours or nearly twenty miles per hour.
- Wolves have been extinct in England since 1500.
- Most wolves in North America are considered gray wolves, though they can be black or white in color. 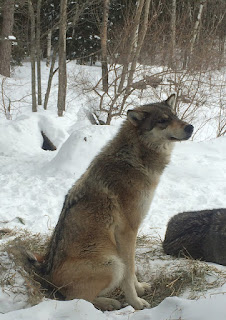 - Like dogs, wolves have their own individual personalities - some are timid, some are aloof, and others can be quite outgoing. The different dispositions are reflected in part by the wolves' order within the pack - higher-ranking animals are more likely to be confident, while lower-ranking ones are often cowardly and shy.
- Wolves aren't aggressive toward humans - they often flee when confronted.

In the process of going through the files that began with "W," I recycled 1/4 of a bag of papers.
Posted by Harvest Moon by Hand at 4:00 PM

Wolves are fascinating animals and well worth the effort of studying imho. How wonderful you have up close and intimate connection with wetlands - they truly are magical ecosystems.

Nice job with the recycling - you're really getting quite a clean out done.

I learnt quite a few things about Warthogs and wetlands and Wolves, thank you. The photo of the lone wolf is super! Kudos on the decluttering.

All the best,
Nilanjana
Madly-in-Verse

Great way to summarize your files "Just in case" and share your knowledge yet again. And ReCyle! Cool!

Affirmations for a Good Life