Back in February I started reading My Backyard Jungle by James Barilla. The subtitle to the book is "The adventures of an urban wildlife lover who turned his yard into habitat and learned to live with it."

I was looking forward to seeing how the author transformed his yard. However, the book was a string of stories about wildlife in a variety of settings locally and globally.

Clearly, the book was significantly different than I anticipated. I did learn some interesting things, though, about wildlife:

- In 1890, a New Yorker named Eugene Schieffelin stood in Central Park. With him were 60 caged birds from Europe, which he soon released into the surrounding trees, reputedly to bring the birds of Shakespeare to the shores of a continent that lacked such refinements. Those birds were European starlings, and thanks to the actions of Schieffelin and a group known as the American Acclimatization Society, we now have hundreds of millions of these literary references roosting in the eaves of downtown buildings and poking around in the grass for  grubs.

- I want harmony and diversity in my backyard, but that's not how the natural world works. There's nothing orderly here. That's why the streets are full of life.

About the relocation of wildlife:

- As a licensed wildlife control specialist, he can't just release trapped nuisance animals wherever he likes; they could spread disease, they could come right back, they could annoy someone else. 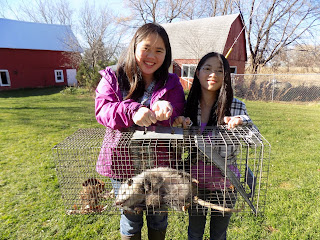 A opossum that we trapped in the barn.
Opossums can spread disease to horses, so we had to trap it.
We didn't kill it...we relocated it far away
where there were no horses or livestock; and
that there was cover and a source of water for the opossum.
That was before we knew that
we shouldn't have done the "relocation program."

If people want to pay him to use excluders instead of traps, that's great. But most clients are paying him to make the problem go away for good, not come ambling back down the garden path. They don't want to see these animals again.

- The last of the trio [of cubs] clambers up the trunk. We watch them. They watch us. Still no visible sign of their mother. "They're coming down now," Fuller observes, although they seem to be staying put to me. He's heard their mom huff; it's a warning sound that means our encounter has entered a new phase.

"That's directed at us," he says as she huffs again. It sounds like someone trying to cover a cough. The first thing a bear wants to do is get her cubs up a tree, Fuller says. Then, if the coast is clear and she thinks she has time, she wants to get them down so they can leave the area. 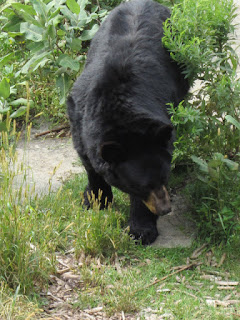 Black bear that Sophia, Olivia, and I saw at
a wildlife sanctuary on our New England tour.
(Taken on September 9, 2011.)

This reminded me of the time when an exchange student and I saw a bear cub climb up a tree. We didn't see or hear a mother bear nearby. We got some great photos of the bear cub in the tree. In retrospect, it probably wasn't the safest thing to do. I don't know if we would have even recognized a huffing sound from a bear in the distance if we heard it.

After a close encounter with a black bear several years later while camping, I know what a bear sounds like. It is not a sound I would like to hear again when I'm alone and in the dark.
Posted by Harvest Moon by Hand at 11:59 PM