Kingfishers, Kites, and Kumihimo - Blogging from A to Z Challenge - Letter K

For the 11th day - Letter K - I am focusing on Kingfishers, Kites, and Kumihimo.

The Kingfisher (also known as a Belted Kingfisher) is a type of bird that I've seen a couple of times. Some interesting things about Kingfishers:

- When it is egg-laying time, both parents (with their long bills), start creating a hole in a riverbank. When it is big enough to stand in, they scratch the loose soil out backward with their feet. They keep at it until they've dug a long tunnel. The tunnel might go more than six feet (1.8 meters) into the bank. 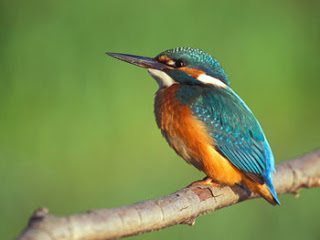 - Their call sounds like a very loud baby rattle. You are more likely to hear than see a kingfisher.

- The "Belted" part of the name comes from the belt of blue-gray feathers across their chests. 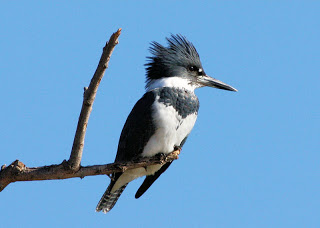 One of the bittersweet parts of doing this theme for the Blogging from A to Z Challenge is that I come across quite a few photocopies or magazine clippings of things I wanted to do with Sophia and Olivia, but never did.

I can recycle a lot because they are too old to do many of the activities or they would be too easy for them. Time has gone by way too quickly.

One example of this is a sheet that I copied about making toys for the wind. The idea was to use a whole range of recycled materials including: fabric scraps (decorated with fabric paints), pieces of garden dowel, discarded packaging of all kinds, and plastic bags. Children could make kites, flags, windmills, windsocks, and banners from these items.

Can I envision the girls making their own kites now? Unfortunately, no. They are more at the stage now of trying to fly a pre-made kite - a large one - that would be both enjoyable and a challenge.

Maybe I need to just accept that some of the (many) things I wanted to do simply will never happen. Living in the present - looking at their ages - they could still enjoy flying kites. It's not too late...it's just a different type of experience than we would have had when they were much younger. 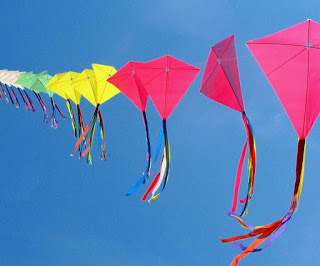 So, as I was searching online for "kites" and "Minnesota" I came across the Minnesota Kite Society. Had no idea it even existed.

"Every year in April Kite enthusiasts across North America celebrate the history and the future of the world’s favorite pastime by letting their kites fly.

It is a month to celebrate the joy and happiness that comes from letting out the line, letting your kite catch the wind, and letting that kite soar high into the sky.

Why April? April was chosen as National Kite Month because it was the month that perfectly symbolized hope, potential, and joy.

As the first month in Spring, it is when most kite fliers are starting to bring their kites out of the closet and prepare for a summer on the beach."

Found instructions for how to do seven-strand braiding. Several years ago, Sophia, Olivia, and I went to the Shepherd's Harvest and visited the Weavers Guild of Minnesota's booth. There were kits there with the octagonal card, embroidery thread, and instructions. 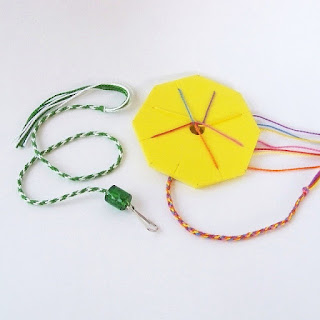 Both Sophia and Olivia enjoyed doing kumihimo. They would make long cords which were pretty with the different color combinations.

If they would do kumihimo again, now that they are older, it would interesting to see what type projects they would make - perhaps bracelets or bookmarks (both of which they would use).

In the process of going through the files that began with "K," I recycled about 1/4 of a small bag of papers. I'm up to 10 bags of recycling since starting the Blogging from A to Z Challenge.
Posted by Harvest Moon by Hand at 4:00 PM

I arrived to your blog attracted by the word "kites". I've chosen the same word today (my theme being Postcards). I've never made a kite myself. I just learned how to fly one, and I'm 41. So... it's never too late!

Thanks for the link to the National Kite Month (although I'm not in the USA).

I loved the concept of raking up the memories by sorting out the homeschooling files! And I can very well associate with it, as I am also a mother of two... and its our yearly routine to clean up the racks and books shelves before the start of every new academic session. And just like you, I stumble upon something that lets me dwell in the past or say revisit the memory.
Kingfisher, Kits and Kumihimo...all from different worlds...still they are woven together by the thread of the sweet memory! Loved reading the post.
------------------------------------------------
Anagha From Team MocktailMommies
Collage Of Life

For some reason the words about kites - letting out the line etc - seemed poignant to me and connected with the whole idea of raising children...maybe its because I'm at the empty nester stage ! I didn't know about the nesting habits of kingfishers and I liked the idea of journaling in the previous post.

I have never come across kumihimo before so that was very interesting as I really like crafting and could see this being used with children in a craft session. I will have to research it a little more and find out exactly how to do it :) Many thanks - http://pempispalace.blogspot.co.uk/2017/04/k-is-for-kids-kingdom.html