One of my goals this year is to read six books about nature. After reading two books for the 4-H Wildlife Project Bowl (Landscaping for Wildlife and Woodworking for Wildlife), I started a third book: The Animal Dialogues - Uncommon Encounters in the Wild by Craig Childs. 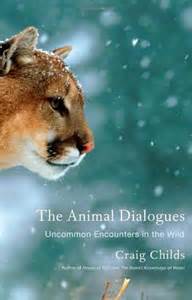 This was a fascinating and engaging book. The short stories about a variety of animals, fish, and insects were quite diverse. Some were more informational while others were nail-biting experiences that the author had with various animals.

Eagles have been known to dive five thousand feet without a single change in course and, at the end of that dive, hook into a salmon below the surface of the water. What a human can see at twenty feet, an eagle can see at one hundred eighty feet. Some smaller raptors, if they please, can read the print of this book from two hundred feet in the air. 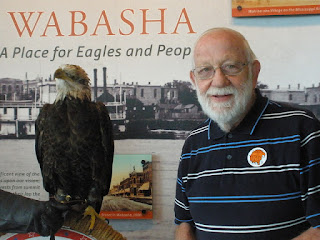 Dad with an eagle at the eagle center in Wabasha, Minnesota.
He was in the middle stages of Alzheimer's Disease at this point,
yet was thoroughly captivated by the eagles.
(Taken on July 12, 2010.)

The respiratory system can propel it to an altitude of 36,000 feet, where no other animal could even take a breath without slipping directly into unconsciousness. It is fair enough to conclude that one of the of the more structurally advanced animals on the planet is the bird.

The  coyote obeys something internal that requires it to sing even when solitary. The singing brings them together. It creates a detailed map of coyotes across a landscape. 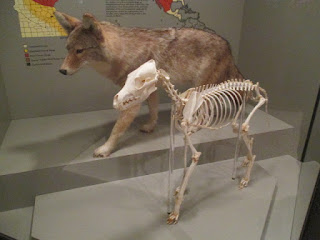 About a third of all coyotes will be in packs, another third traveling in pairs, and the remaining third going solo.

A dog registers certain odors ten to the sixth powder more faint than what a human is able to detect. 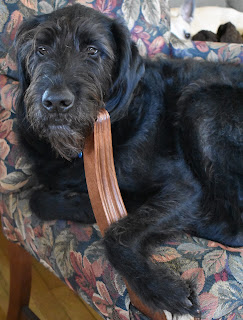 We [have] the physical capability to sort through 10,000 scents at once. But few come to the surface....Eight molecules are enough to send an impulse to your brain and alter your hormones, but it will take at least 40 for you to take note....Molecules snagged on our olfactory nerves can change the way we breathe, start and end fights...and cause our stomachs to rumble. 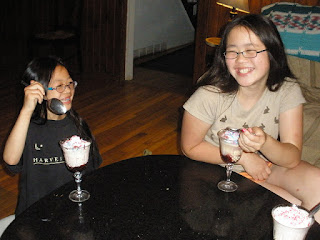 Of the 10,000 scents the human brain reads most of us can speak to only 40 of them, identifying them correctly as strawberries or as motor oil.

Mosquitos are more likely to go for a man than a woman, an adult than a child, a person wearing black rather than white, and someone who is physically large.

They move like birds, swerving together as they aimed for a single point. They are the fastest long-distance runners on the continent, some of the fastest land creatures in the world, clocked at nearly sixty miles per hour.

The young pronghorn was a newborn. Days old. It was motionless. This is the defense of newborns. The only defense.

Pronghorn fawns spend most of their time alone, inert on the ground until they are strong enough to make a thirty-mile-per-hour spring. It may take as little as three days to develop that kind of speed.

Don’t be misled by their casual manner of hanging from trees far overhead. They are no daredevils. Porcupines do fall….Autopsies of porcupines have revealed common falling-related injuries.
Porcupine quills are blanketed in mostly palmitic acid, which is a strong antibiotic as effective as penicillin.

Healed skeletal injuries [were found] on about 35% of porcupine skeletons. Ten percent of raccoons had similar injuries, and 7% of woodchucks. Porcupines, it appears, are good at hurting themselves.

Being famous tree climbers, but equally famous dullards, they must be cracking their skeletons by falling out of trees. Thus, antibiotic quills. You have enough problems if you fall 30 feet out of a tree. If you survive that, you don’t want to die of infected stab wounds from your own quills.
Posted by Harvest Moon by Hand at 11:59 PM

I cannot believe seeing the photo of Cooper he looks JUST like the wonderful mongrel we had when I was a child - who people were always coming up to us and asking what breed she was. Is Cooper also a mongrel - if so, do you know what supposed heritage?
http://pempispalace.blogspot.co.uk/2017/04/p-is-for-popular-people.html