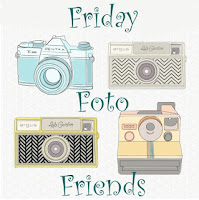 It has grown and evolved to meet the needs of the families who are in the club.

Here's what a typical first Thursday of the month looks like:

They are moving onto the state Project Bowl in Sauk Rapids to compete against the top teams in each of the four Minnesota regions. 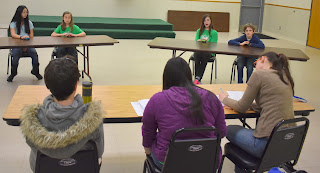 At each of the meetings, the team did "mock competitions" which helped them practice their questions and prepare for the regional and state Project Bowls.

At other times of the year, (September-December; May-June) there will be committee meetings and project club meetings (e.g., Art of Math, Health & Wellness, Food Science/Cooking) that are held before club meetings.

The club meeting starts with time to play outdoors - either games or on the playground. It was a nice - yet VERY windy day yesterday. The kids and some of the parents enjoyed playing with the parachute. Sophia (in the purple sweatshirt on the right) led the games. 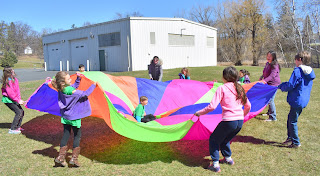 Other youth - like Olivia - played on the playground and swing set. 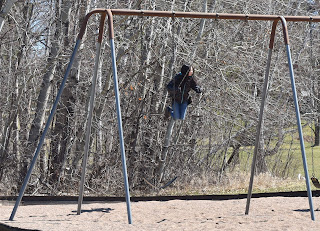 There's a business meeting led by the youth. There's a president, vice president, secretary, and treasurer. This gives youth practical experience in leading a meeting.

We have three levels of programming at each meeting: 4-Hers (8+ years old), Cloverbuds (5-7 year olds), and Saplings (Birth-4 years old). The activities are age-appropriate and led by different parents and/guest speakers.

At yesterday's meeting, the 4-Hers listened to Barb from Northwoods Humane Society do a presentation about what NHS does, pet care, and animals. 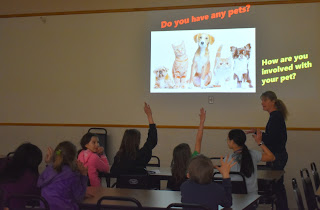 The youth learned a lot of interesting facts about animals and their care. We were all surprised to see the slide about why it is important to spay and neuter animals. Each image shows how many cats or dogs could be born if all of the descendants were not fixed. It was a staggering amount. 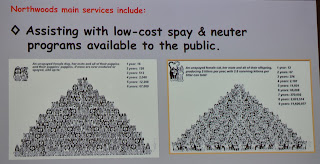 After the presentation, the 4-Hers played a game of "Northwoods Jeopardy" which challenged their knowledge and encouraged teamwork.

At each meeting, youth can give demonstrations about a subject that interests them. Yesterday's meeting featured four demonstrations or informational presentations about poultry, computer animation, origami, and sheep/sheep wool. 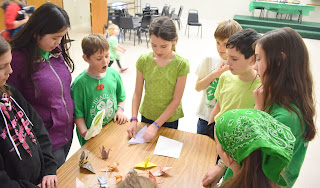 Meanwhile, the Cloverbuds were learning about their taste buds by sampling four different items: bitter chocolate, salt, a pickle, and a sugar cube.

Then they drew their favorite meal in their binders. 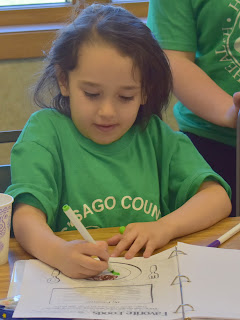 They learned how to make a healthy sundae with yogurt, banana slices, and a graham cracker. 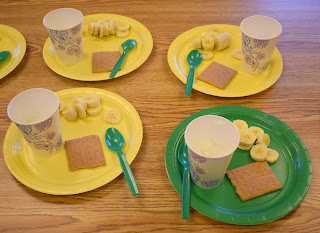 The Saplings listened to a story and had a picnic (a tie-in to the story). They played on the playground initially as a group and then the Cloverbuds joined them.

At the end of the meeting, everyone gathered inside to create a 4-H. The little ones (7 and under) make up the "4" and the older youth make up the "H." Sophia, as the club president, is the dash.

After the youth have a snack, those who are on a committee stay for a meeting (if their committee is meeting that month).

This month the Club Banner Committee was meeting. Not all the youth were able to stay, so they took their materials home to do their fabric paintings.

The ones who could stay painted pictures that represent different 4-H projects. They used fabric paint on felt which was a new experience for some of them. 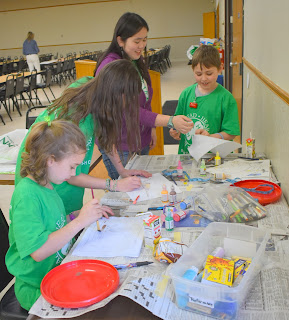 We are hoping that by the June meeting the banner will be completed. It will be entered in the county fair as a club project. Last year, our club banner won a top prize and was shown at the Minnesota State Fair in the 4-H building. That was exciting for club members and parents to see.
Posted by Harvest Moon by Hand at 5:52 AM

Loved our 4-H Club in Rhode Island - the whole program had such dedicated volunteers and our club leader was fabulous! A wonderful organization.

Your photos brought back memories of years ago when my daughter was a 4-H member. She is now 53 :) Enjoyed your post. Thanks for sharing.

Oh, how interesting. Our daughter home schools our grands... the 2 older boys are in 4-H and are raising baby chicks right now... They're adorable and grow so fast... baby chicks and grand kids! 😊 Thanks bunches for linking up and sharing!

Great groups like this certainly help to build awesome citizens. I'm glad they are still around and showing kids what life is about with their competitions and meetings.