Recently, my sister and I have been working on our family tree. We have been going through old photo albums and loose items that belonged to my parents, like yearbooks, newspaper articles, and loose photos.

We are so thankful when the old photos are labeled with the name(s) of the people in them as well as a date. Even better is when the location is noted also. Sometimes we have no idea who the people are in the photos which is discouraging.

The following ones are some of the oldest ones we found. I've included some "newer" old photos as well. I've labeled who is in the picture, when and where the photo was taken, and - if possible - a couple of sentences for each one.

Standing on the train car on the back left is my great grandfather, John Krug. It looks like they were taking a break from working on the railroad. This was taken in about 1900 when the Brownie camera (an inexpensive point-and-shoot camera) became more readily available. 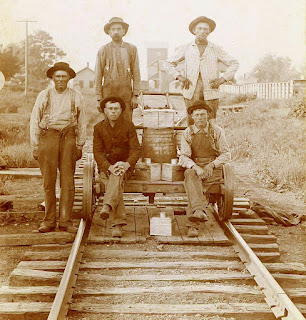 This is my paternal grandma, Olive Rinkenberger, with my dad, Don. This would have been taken during his first year of life, in 1932. 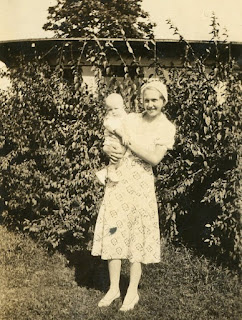 This is a four-generation picture taken in 1932 of:

- my dad, Don Rinkenberger (the baby),

- his dad/my grandpa, Burl Rinkenberger (standing on the right),

- my dad's grandpa/my great-grandpa, Samuel Rinkenberger (standing on the left), and 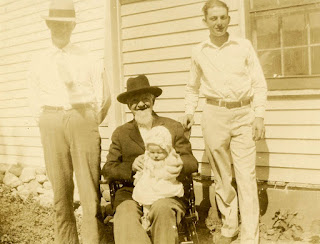 My dad had a close and loving relationship with his siblings. Here they are on one of their farms in about 1938. My dad is on the right. His sister, Marilyn Rinkenberger, is in the middle; and his brother, Richard Rinkenberger, is on the left in the cowboy costume. 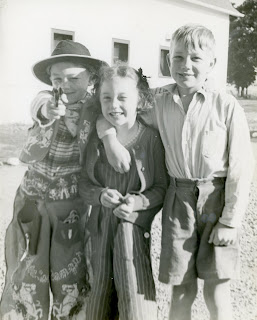 My dad was active in 4-H when he was growing up. One of his projects was an Angus cow. It is shown here with my dad in the Summer of 1944. I remember him telling me how much he loved that cow...how gentle it was. He was devastated at the end of the county fair when his beloved Angus had to be slaughtered. Still to this day, the auction process is part of the 4-H experience for market animals. I just couldn't do it. It would be so sad. My dad never showed another cow or market animal through 4-H. 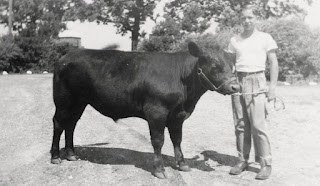 In October 1963, my maternal grandma, my mom, and dad were standing outside somewhere. When looking at this photo for the first time last month, I wasn't sure if that was my grandma since she appears taller than my mom in this photo. (She wasn't - she was shorter than my mom.) My sister went back on some old photos of my grandma and she had that same pose - with her arms folded over her stomach - in other photos. She also had heels on which made her appear taller than my mom. When this photo was taken, my parents were not yet married. 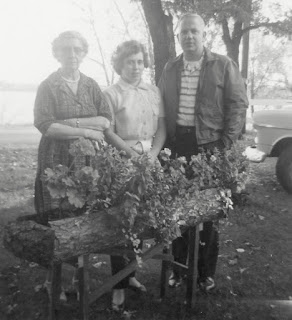 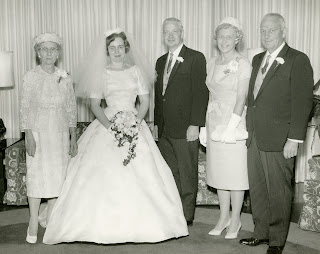 My parents got married at Incarnation Church in Minneapolis. It was near where my mom and grandma lived. I remember walking to the church when I would stay overnight at my grandma's home. I don't recall it having a dome like that over the altar. I need to go back and see this church. Going to it now will probably bring back memories of earlier years in the 1960s and1970s. 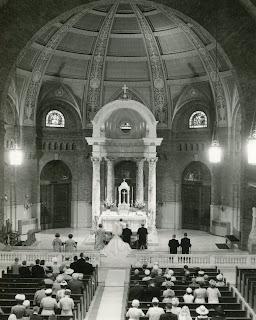 Who could forget the 1970s and the polyester clothes of that decade? This is taken in about 1976 of my family including my parents (Don and Dorothy Rinkenberger), my sister (Mary), my brother (Jim), and me (Ann) rocking that pink and white polyester outfit. 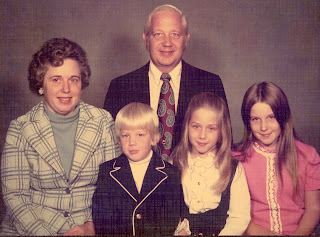 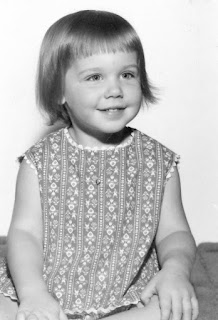 I am wearing a dress that my mom sewed. How do I know that? My mom loved to use rick-rack (the trim) on clothing. She put it on the neckline, the sleeves, and at the bottom of the dress. She sewed clothes for us well into junior high. At that time, she was making knit shirts for all of us kids. After that, I used babysitting money to buy clothes and accessories for myself since my parents had a limited income.
This was a glimpse into the hundreds of old photos I've been scanning recently. My sister has boxes of scrapbooks and photos that belonged to my parents, so I'll have hundreds more photos that I'll be scanning each month for the rest of the year. It is worth it, though, to have these photos in digital form just in case something happens to them or they continue to deteriorate.
Posted by Harvest Moon by Hand at 9:27 AM