A Rainbow of Photos

On Swap-Bot, there is swap called "A Rainbow of Photos." I signed up for this and went back through my photos to see if I had one photo in each color as well as some photos of rainbows. Sure enough, I found at least one for each category.
Here's my favorite rainbow picture taken in August 2013. This is looking west from our driveway. I'm so grateful that I was there to take the photo. I don't think I've ever one large and in a perfect position like this over our west pasture. 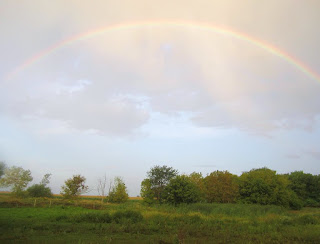 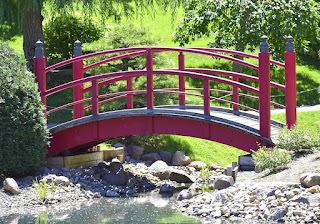 This red bridge is at the Japanese garden at Normandale Community College in Bloomington. The garden is peaceful and quiet, despite being in the city.

This is called a Taiko-bashi - a drum-shaped bridge - and its leads to the Bentendo (a hexagon-shaped building on one of the three islands in the Japanese garden's pond.

The name "Bentendo" is a combination of two words: Benten is a gooddess of fortune and Do is a suffix used to indicate certain kinds of buildings). The Bentendo does not have a function. It's just used for accent in a Japanese garden. 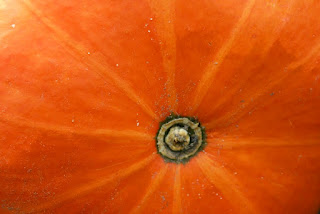 My husband used to grow pumpkins each year and sell them. Sophia and Olivia would help him with the planting, and they enjoyed doing that when they were younger. They especially loved seeing when the pumpkins were ready for picking! 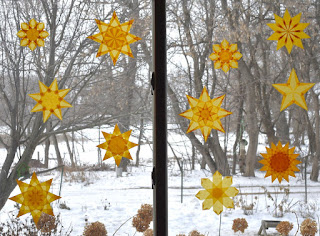 When Olivia turned 18 years old, it also was her golden birthday. So, I made 18 yellow window stars. These are 11 of the 18 I made for her. They are made from kite paper, and the points are folded multiple times to create different patterns. 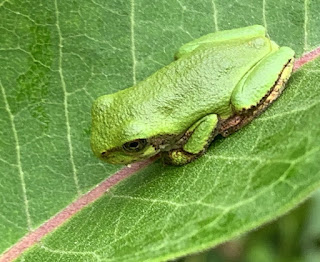 This is a little frog that was on one of the shrubs in our backyard. I enjoy seeing the variety of frogs and toads we have here at the farm...especially these bright green ones. 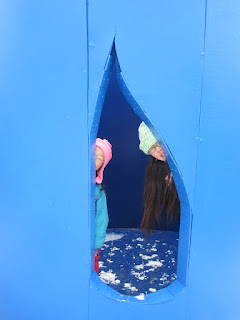 Olivia and Sophia are peeking out from a sculpture at Franconia Sculpture Park. We visited the park in December when there are significantly fewer people out walking and exploring the sculptures. 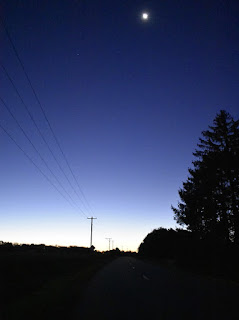 Olivia took a PSEO class focused on digital imaging during her senior year of high school. One of the assignments was to take photos during the "blue hour." What is the blue hour? It's the time of day before sunrise and after sunset when the atmosphere has a deep, dark blue (indigo) color.

It's not really an hour. Its exact length depends on the time of year, weather conditions, and one's latitude. When taking photographs, the most important thing is that sun has to be below the horizon and the sky can't have a lot of sunset or sunrise colors...it should be mostly blue. 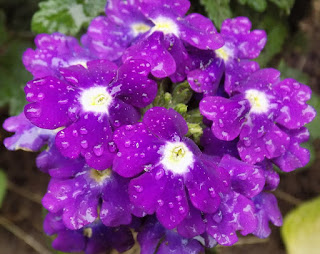 One of many flowers in our gardens at our farm. We have 16 gardens this year - each with a different focus and types of plants (with the exception of the 4 pine trees in the front yard that all have basically the same theme and type of plants - hostas, ferns, and bleeding hearts).

I like purple flowers a lot and have many different types. My favorite ones in the late-summer and fall are Liatris (Liatris ligulistylis). We have had so many monarchs this year - much more so than in the past. It is common to see 4-7 monarchs on one of these plants. It's just amazing!! 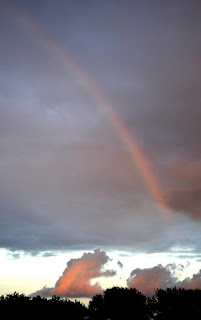 One last photo of a rainbow. This was taken in the late summer four years ago. It's only a partial rainbow because the other part was hidden behind the clouds.  This photo was taken from the driveway - just like the rainbow photo above.