It's only the third week into the Take Stitch Tuesday and already I've learned two new stitches (fly and feather) and some variations for one I already knew (buttonhole a.k.a. blanket).

This week, the feather stitch was introduced. Like the fly stitch, I had never heard of it until participating in Take a Stitch Tuesday. This weekly challenge is making me realize how truly limited my embroidery stitching was in terms of stitches I knew and ones that can be done. 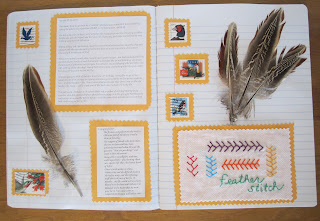 I was rather intimidated by the feather stitch - it seemed to be a quite tricky stitch when I read how to do it initially. However, I found a trio of pictures on the Caron website  that somehow helped me better visualize how this stitch is done and found it to be equally as enjoyable as the buttonhole/blanket stitch.

What I also found helpful was marking four rows for each set of stitches as the Pintangle website suggested. I used a water-soluable pen which was much easier to learn the stitch rather than counting each column  (I still counted the rows (e.g., where letters C and E are in diagram 1 above). 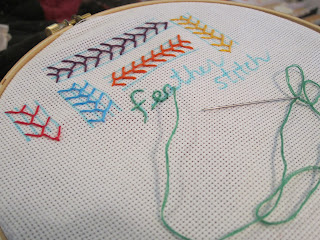 Four rows are marked for each sets of stitches
with a water-soluable pen.

I experimented with different numbers of embroidery floss (the red thread has 2 pieces of floss; the rest have 3 pieces of floss); and different sizes of the "U" by varying the number of rows (either 2 or 3 rows with the exception of the purple section which alternatures between 2 and 3 rows to vary the size of the "U").

As with past weeks, I included a journal entry about what happened during the week and a short list of people and things for which I am grateful. 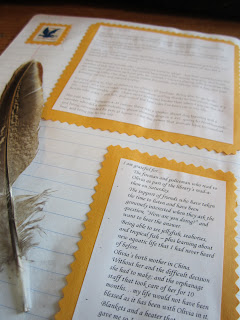 The gratitude list and journal entry are a part of
each week's activities.

This week, I added natural elements like I had hoped to do at the beginning of the year. The feather stitch lent itself nicely to including feathers I found in the pasture during the summer, but never got around to putting in my nature journal. 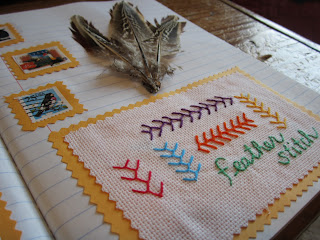 Trio of feathers I found in the pasture combined
with postage stamps and the stitching.

I also included several postage stamps. I have seen each of the birds shown in the stamps...even the one on the Australian stamp when I went there in 1996.

The dove is an image I like because it reminds me of Olivia (who is 9 years old now). Her name means "peace" and the image of the dove, to me, conveys peace and hope.
Posted by Harvest Moon by Hand at 1:06 PM

I am really enjoying your stitching posts, I love to embroider, but only have a handful of stitches under my belt, feather stitch is one I have wanted to try for awhile, I will be getting out my needle & thread later to give it a try. Love the way your journal is coming along!!

I haven't embroidered for maybe 30 years. I did crewl work and only remember a few stitches, so this is interesting to me even if I never do actual embroidery again. I can always use the stitches with card crafting because you can hand sew or machine sew on paper, too. Thanks! :)

Lovely stitching! I really like your journal idea- the gratitude list and journal entry are so great- a wonderful thing to have to look back on, in the future...