During October for the 3 in 30 challenge, I have set three goals. There is also one that is a carryover from September which I never completed. Here are my goals for the month as well as the progress I've made on them so far:

1. Work on organizing and creating the book with all of my Dad's homilies, prayers, and invocations. When my Dad died in January of this year, he left behind files of things he wrote and presented while he was a Deacon. I want to organize these items; and then have them printed and bound. The final books will be given to family members at  Christmas as well as to people who may be interested in reading what he wrote. A book also will be donated to the library at the church he attended.

Last week I divided all the homilies, prayers, and invocations by month. This week I put the items my Dad wrote in chronological order by date within each month. If my Dad preached or said a prayer on the same date, then I put the items in order by date and then by earliest to latest year.

Every homily, prayer, and invocation my Dad wrote and spoke
while he was a Deacon are now in chronological order.

I took some time to read what my Dad wrote in a homily he delivered on October 12 and 13, 1996. In it he spoke of his interest in becoming a Deacon. I didn't realize he had wanted to be one for well over a decade before making the decision to become one. Here's what he wrote:

"My first interest in the diaconate was aroused while reading an article about two Minneapolis Northside deacons in 1978. A couple years later I attended an annual diaconal information night. Later discussing the diaconate with Dorothy, my wife, we decided that my work with Minneapolis Public Schools, our young family, my involvement with this parish and in the community, that this was not the time to accept the Lord's invitation. However, reading the stories of each year's ordained deacons continued to keep my interest alive in the diaconate.

"Then God uses other people sometimes. Deacon Gene Winn, who was ordained in 1980 and served here at St. Joseph's for several years, encouraged me to attend another informational night. I was too bus;, had excuses and reasons; and was very comfortable with my life.

"Yet, deep within I heard the voice - the invitation to 'Come, follow me.' So I attended the meeting on October 14, 1987. I listened. I prayed. I heard the personal stories of those in the program and from ordained deacons. The meeting closed with singing of 'Here I am, Lord.' 'Is it really I, Lord?' "I have heard you calling in the night (and in the day).' 'I will go, Lord, if You lead me.' and 'I will hold your people in my heart.'

"That night I truly felt the Lord's presence, had a real conversion of heart, and a spiritual experience that shook me to the very depth of my soul. As tears welled in my eyes, I simply said, 'Here I am, Lord.'"

My Dad applied to the program, went through the three-year diaconate formation program, and then was ordained on September 28, 1991. 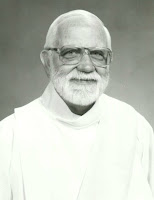 A picture of Dad from around the time of his ordination.
He is wearing one of his Deacon albs.
He had a variety of stoles that he would wear
depending on what he was doing (e.g., baptism, marriage, funeral).

He did baptisms; witnessed marriages; served as a presider for Communion services; visited the sick, homebound, and hospitalized; gave homilies; and served as a lector and acolyte. He and my Mom also founded a group for seniors that provided social and travel opportunities as well as support.

One of the things my Dad also did was conduct funeral vigils, services, and committals. After his death, I found out from the funeral director that he often called on my Dad when there was a person who had died who didn't have enough money for a proper funeral or burial. My Dad performed the funeral service and committal for no charge. He felt like everyone deserved a proper burial...even if s/he was poor and didn't have enough money.

So, this project - organizing my Dad's homilies, prayers, and invocations - has certainly been enlightening and meaningful. It is a very positive activity I can do during a particularly challenging month.

2. Do at least 8 activities that celebrate autumn and Halloween. There are family traditions that we do each year that I want to continue as well as some ideas that I've read about that I'd like to do. The girls enjoy trying new recipes, so making some new food that includes apples or pumpkins, and/or food that is orange and gold/yellow will be part of this goal.

I bought fiberfill, a stocking cap, and four pieces of felt to make Olivia's costume. (She wants to be a sheep.) 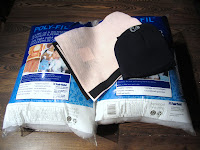 
The girls made autumn-theme sugar cookies. They tried a new recipe which was very good. With two sticks of butter as well as almond and vanilla extracts it...it should taste good. They frosted the cookies and put sprinkles on them.

I also went through my Halloween board on Pinterest and clicked over to the source of the pins so I could either get more information and/or the recipe for the autumn/Halloween item featured. There was a great resource for 13 themes that start 13 days before Halloween. Each day there is a service project that ties into the theme (e.g., owls, pumpkins). There also are lots of recipe ideas.

So, I printed out the ideas that were age-appropriate for Sophia and Olivia; and have them ready to go on the 18th.

I was planning on going to the apple orchard this week, but we haven't done that yet. I have been feeling sick for most of this week, so the best I could do was get the pears canned.

Pears and peaches that I canned.
I wrote a tutorial about how to can pears.

Next week we'll go to the apple orchard; and make apple pies, applesauce, and dried apples.

3. Work on the African Library Project. We collected quite a few books during September for the library that we are going to establish in Lesotho, Africa. We still need to do a count of the books so that we can determine if we reached the goal of collecting over 1,000 books. At that point, we will need to sort them, pack them, and mail them to the African Library Project. We need to raise $500 to off-set the cost of postage to mail the books first to the ALP in California. They, in turn, put the boxes in containers and mail them to Africa.

I counted the books that we collected during September - there were 218. Adding these to the amount we raised prior to September, we now have 1,098 books that are for the library that will be established in Lesotho, Africa. In addition, there are resources for teachers to use in their classroom (e.g., curriculum, workbooks, flashcards).

So, we have now reached our goal with the amount of books we wanted to collect. This is so exciting!

The 218 books we collected during September.
These are added to the others and are now ready to be shipped.
We just have to raise the money now for shipping.

We have not made any more progress on raising $500 needed for shipping. We are still at $25. I am hoping that within the next few weeks this comes forth so that we can ship the books and get them to the African Library Project and onto the primary school in Lesotho by the end of the year.

1. Organize fabric. Most of the fabric I use for projects are in bins grouped by color. However, there are some pieces of fabric that are in bags that I want to put in the bins. Also, I'd like to go through all the fabric and donate the pieces I don't care for any longer and/or plan to use.

I did not work on this project.
Posted by Harvest Moon by Hand at 11:55 AM

Good job with your goals! And thanks for sharing your dad's writing. It was really beautiful!!

We sing this song every week at the very end of our church service and do the sign language for it, too. One year, we had a songwriter write a song for a special occasion we were having (100 years, I think) and I remember the first time I heard it.

Right in the middle, he wove in that song and tears came to my eyes when I heard it, because it is so US.

It sounds like you're learning a lot about your father while going through his papers, and I'm sure that means a lot to you. You got a good bit on your "fun" goal of doing fall activities; good for you! And there's still time for the last two goals.

Wow awesome job on your goals. I can only imagine how it must be to go through your Dad's writing and get to know that side of him.