Many years ago, my parents were cleaning their home and they passed along toys that I played with when I was a child. 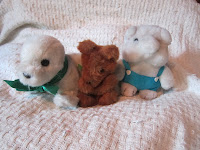 Three of the stuffed animals I had when I was growing up:
a baby harp seal, teddy bear, and piglet wearing overalls.

They thought that the toys would be better off with me so that Sophia and Olivia could play with them, rather than sitting unused at their home. 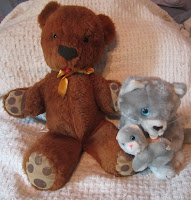 Two of my stuffed animals that I had when I was growing up.
Both were ones I received when I was a teenager.
The mother cat holds the kitten with her velcro tongue.

Some of the toys I have let the girls play with, while other toys and dolls are just for looking at and not for playing. 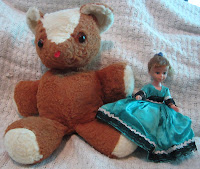 These toys are not for playing with:
the teddy bear I had when I was 1 year old and
a doll that belonged to my grandma (on my mom's side).
The doll is one of only a few things I have that belonged to her.
She had a doll collection featuring different international dolls
in her dining room. I was always fascinated with it when I was a child.
They were dolls only to look at...not to touch.

I remember growing up that there were even some of my toys and dolls that I considered to be "hands off." The only thing, for example, that I did with my Madame Alexander doll was comb her hair and set her gently on the bed or shelf. 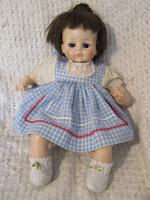 This is the Madame Alexander doll that I had on my bed or shelf.


The "off-limits" toys and dolls are few. There are more that I put out for the girls to play with when they were younger. It was nice seeing them enjoy some of the same things that I played with when I was a child. 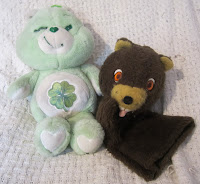 A Care Bear and puppet that I had when I was a child.


I tried to keep the items I knew were more expensive and/or had special meaning in good condition. 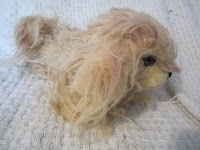 This dog is actually a battery-operated radio.
I use to have her hair brushed out and
she had a pink barrette on her head.
I would listen to the Mystery Theater on WCCO for many years
(it was aired from 1974 to 1982) at night,
often times falling asleep with the dog right next to my ear.

Taking care of my toys and dolls was important to me because I knew how hard my dad worked to provide for our family. (We lived on one income - a school social worker's salary which wasn't much in the 1960s-1980s.) 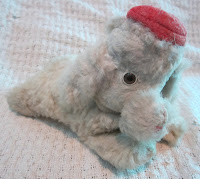 This French poodle with a red beret is one of the oldest toys I still own.
I would have had it back in the late 1960s...about 40 years ago.

I didn't want to break or destroy any toys because I didn't know if I would get another one. I took care of what I was given or gifted. 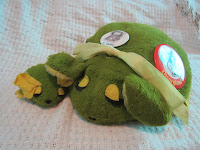 This mother and baby mouse was on my bed from the time
I was about 6 or 7 years old until I headed off to college.
On its underside is a space to put your pajamas in.
My grandpa and grandma (on my dad's side)
gave them to me when they visited one summer.


One doll I did play with often was Chrissy. Her hair could be long or short. To make it short, there was a knob on her back that you would twist. With each twist, her hair got shorter. To make her hair long, there was a button on her stomach. If you pressed it and held it in while grabbing on the ponytail and gently pulling it, her hair would "magically" grow. 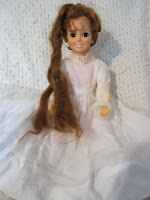 Chrissy and her hair have seen better days.
I really should brush out her hair and make it look nice again.

I also remember playing with the Sunshine Family.

The Sunshine Family.
I don't know what happened to the set we had when I was growing up.
Source

If the Sunshine Family dolls were around these days, they'd probably being doing the same things plus homeschooling their children and running their own home business. They were dolls that I could identify with back then (since my parents were eco-friendly, recycled, and started a natural foods co-op even before it was the "in" thing to do)...and still could these days if I were a child.

I think Sophia and Olivia would have enjoyed the Sunshine Family dolls when they were younger. The same interests that the doll family had reflect ones that we still believe in and do today.

So, although a lot of things change throughout the years with toys and dolls, some things do stand the test of time and are engaging and appealing even for children these days.

Posted by Harvest Moon by Hand at 4:39 AM

That's awesome that your parents kept those toys for you. I don't think I have any toys from my childhood.

good to you because you still have those, all my fave toys were caught by fire. thanks for the visit and hope you can join our green monday.

That's so great for you AND your girls to have your own childhood toys to share together. My mom saved tons of stuff from when my sister and I were small and I'm having a great time watching my son play with our toys (good ones that you just can't find anymore!) and reading him the same books I had read to me :)

Sarah @ Made in USA Challenge said...

How fun! I have a lot of my childhood toys saved in my parents attic. My son actually plays with some of them already.

That's wonderful that you still had some of these toys to share with your kids. I still have my first teddy bear and mine is put up as hands off also.

I had a Velvet Doll (similar to Chrissie) and the Sunshine family. I loved those little dolls and baby dolls were my passion, always.

I didn't have many dolls and don't remember any stuffed animals. I had a big baby doll with a cloth body, rubber arms and legs, and a hard hollow head with eyes that opened and closed. My brother bashed her head in against the basement wall. My sister and I got barbie dolls--the originals--and the dog chewed them both up. But I had a big cloth ragdoll that my uncle gave me for my first birthday and I still have her. She is much the worse for wear, but she's still with me.

And my grandmother had a plastic baby doll with a pretty pink dress and white plastic shoes that nobody could touch. I always wondered why she had it because she had two boys? I remember looking at her when I was a kid and wishing we could touch her. After my grandmother went to the nursing home--I got the doll. And she sits on my bedroom dresser.

Those are the only toys I have from childhood. This was a great post! Loved seeing all the old toys. :)

I enjoyed looking at the toys that were saved for you. I remember also playing with a doll with the ceramic head and the eyes opened and closed. It wasn't mine though; I don't know whose it was.