This week for the P52 Photo Challenge, the theme is hobbies. One of the hobbies I have is needlework (cross-stitching and embroidery) which I have been doing now for over 30 years.

To keep the embroidery floss organized, I wrap it around paper holders that are available at craft stores. In this way, the floss doesn't get tangled and it is together in one spot. 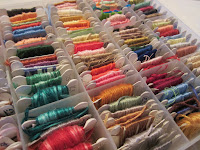 When I first starting using embroidery floss it was for cross-stitching. I followed patterns which noted which DMC floss numbers I needed to do the pattern. So, I organized my embroidery floss box by DMC number. In that way, when I was ready to do another project I could check the box and see if I already had the floss.

Now, I rarely do cross-stitching. Rather, I do embroidery patterns in which the focus is more on the color rather than the DMC number.

Olivia suggested that I should re-do the box by sorting the floss by colors rather than number. Perhaps that will be a project one day during the winter when it is too cold to go outside.

Posted by Harvest Moon by Hand at 7:21 AM

Hi! I found you through another site and love your blog! I, too, am an adoptive parent! I am your newest follower and look forward to connecting with you!

Isn't it wonderful to have something you have loved to do for 30 years!! Awesome! :)

It's a beautiful photo! It reminds me of my mother's thread drawer in her sewing desk.

All that floss is super pretty!! :) reminds me of all my mom's work in cross stitch! Now I use embroidery floss for kids crafts and my handmade notecards! The possibilities are endless! :)
finally visiting some P52 posts!