I came across an image for miniature cherry pies that were made in muffin tins, and thought that they it would be a good starting point for homemade peach pies. 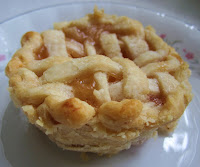 Miniature peach pie that Sophia made.

So, I started with making a recipe for the pie crust. The original recipe on Adventuress Heart used a recipe that she found in Matha Stewart Living. However, my grandma had an excellent pie crust recipe that she used when she was a baker, and I have used it as well for 30+ years.

Turn out dough onto a clean work surface. Divide in half, and place each half on a piece of plastic wrap. Shape into flattened disks. Wrap in plastic, and refrigerate at least 1 hour or overnight. The dough can be frozen for up to 1 month; thaw overnight in the refrigerator before using.

The next step was to make the pie filling. I used a recipe from my Betty Crocker cookbook.

Mix sugar, flour, and cinnamon in a large bowl. Stir in peaches and lemon juice.

The little pies are made in a cupcake pan. No greasing or spraying is necessary. Just cut the dough and put it right in each spot. We used a small bowl to create a circle and then a knife to follow around the indentation. 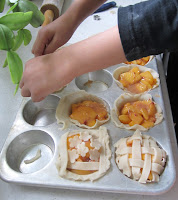 Olivia assembling one of her miniature peach pies.

For the top crust, we used a smaller measuring cup to cut the circles (1/3 cup worked well). Once the circle of dough is cut out, you can make it any design you prefer - lattice, plain crust, or crust with decorative designs.

If you would like, use some eggwash to create a nice sheen on the little pies before baking. (We skipped this step, and opted for just sprinkling some sugar on top which was fine...it saved an egg that can be used for something else.)

Bake at 425 degrees for 20-30 minutes. (We set the timer for 15 minutes and began checking it every five minutes at that point until the pastry was crispy and browned.) 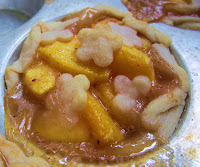 One of Olivia's peach pies.

The original picture of the miniature cherry pies is certainly eye-catching. Although the taste of the miniature peach pies was excellent, the presentation is definitely lacking. I have absolutely no idea how those little pies came out so perfectly from the cupcake pan.

Also, the miniature peach pies were a lot more work than a traditional pie. In the future, I'm sticking with the standard size pie or finding reusable miniature pie tins in which the person can eat from them rather than having to remove the little pie from a muffin tin. 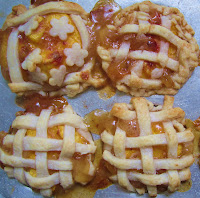 Four of the miniature peach pies
ready to come out of the muffin tin.

My mom used to do this with apple pies - making and freezing lots of little single-serving ones. However, the single-serving pies my mom made were larger than the muffin tin sizes we made today. Perhaps there's something new that has been created in the past 30 years that would address this issue. 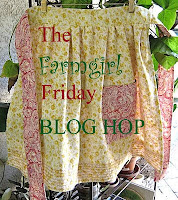 Posted by Harvest Moon by Hand at 9:10 PM

Fabulous! Pinning :) New follower too.. Have a great day!

I think these look great, even if the presentation wasn't "perfect," what's better than home made? I'm definitely pinning this!

I love mini peach pies - they're so nice. Peach crumble is yummy too btw :)