This month I started a new position with a local museum to do their marketing/PR work. One of my favorite parts of the job is photographing items in the gift shop and the museum's artifacts. Below are Dala horse salt and pepper shakers. 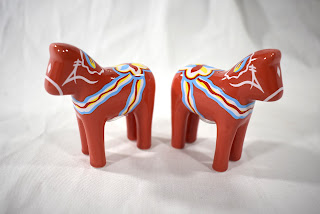 This is a hand-carved tomte and pine tree. 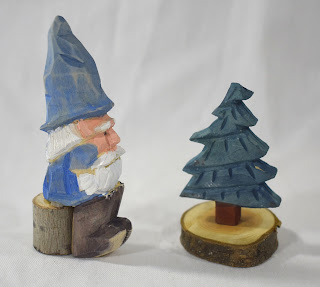 This is one of 150 dolls that were donated to the museum. Each doll has an outfit that represents the clothing typical to a region in Sweden. 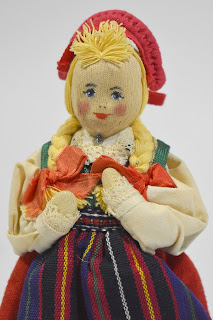 When I was taking the photos, my younger daughter was helping me. At the end of the session, I took photos of her. The first one she liked the best. 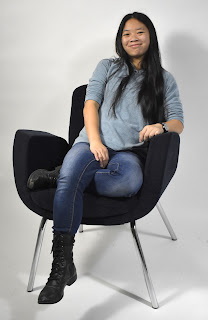 These two, though, capture her spirit more - her laugh and mannerisms. 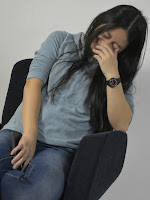 I took some photos of Cooper on the first day that it snowed in November. This is one of them. He is looking out at the tree and watching the birds. 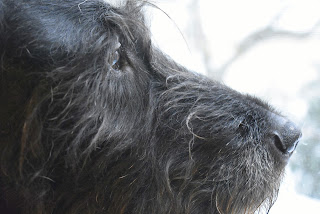 On the 18th, we celebrated Olivia's anniversary of her adoption day. She found a restaurant near her college that we all enjoyed. Her anniversary is actually on the 17th, but she had a class field trip for her Humanities class that was meeting on the 17th. So, the 18th it was for our annual anniversary dinner. 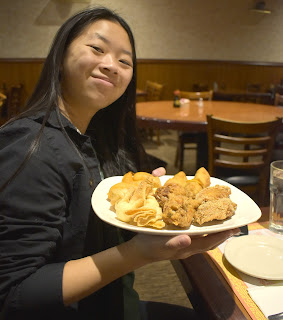 On the 23rd, Olivia, Sophia, and Nessa (one of Sophia's roommates) came home for Thanksgiving. On the 23rd, we celebrated Nessa's birthday by going to a new arts organization in Wisconsin. She hadn't been to Wisconsin, so that was another bonus "gift." 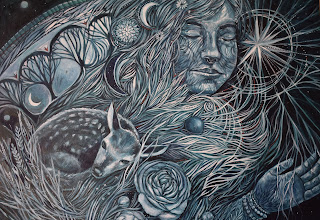 The picture above and below were in the gallery. 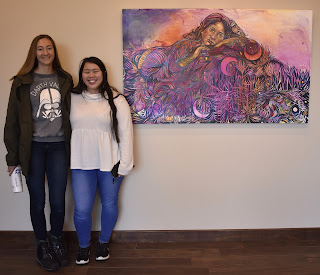 We continued exploring Osceola, Wisconsin, by going to an antique store. None of us had been there, so it was fun to explore a new place. 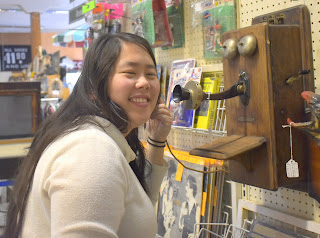 For Nessa's birthday, I made lasagna. I made some changes to my mom's recipe - like adding more mushrooms, spices, and fresh mozzarella. 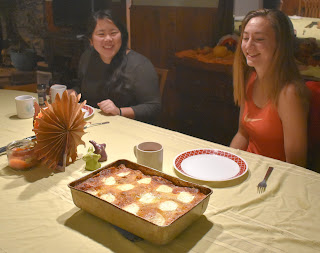 I made a Toll House Chocolate Chip Pie (instead of a birthday cake). Danny (the dog) is hoping the pie is for him. 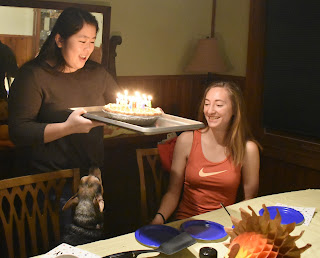 On the 24th, we celebrated Thanksgiving. There were 14 people total. We had both a turkey and ham, plus a lot of side dishes. We had three different pies for dessert. 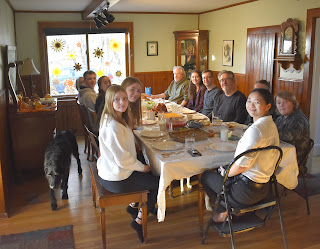 On Thanksgiving, my sister brought slides that my parents took. There were quite a few I had never seen before, so that was nice to see them. My brother, sister, two nephews, and I watched the slides. For some of them, we could share details that the others did not know.
Below is my sister (on the left) and me (on the right) with my mom and dad. There's a plant to the left in the photo. It's fake. That plant traveled from the house in Minneapolis (pictured below) to the one in Plymouth. They had it for decades. 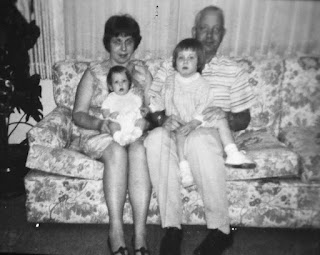 My sister explained the significance of this photo. For my parents' entire marriage, my mom wanted a real Christmas tree. My dad didn't want one because of the mess that real trees can leave in a home. Well, one year, my parents went out to get a real tree. My mom looks so happy by the tree. Another slide after this one showed my dad using a saw to cut it down. This photo would have been taken after we graduated from high school. New traditions once all the kids leave the home...I know this all too well now that Sophia and Olivia are both at college. 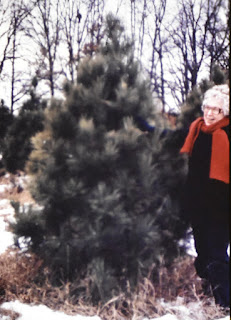 Another photo I never saw was this one of my sister (on the left) and me (on the right) in front of one of our elementary schools. This is the second elementary school I attended in Minneapolis - Hamilton was Kindergarten and first grade, and Loring was second grade.
Once we moved to Plymouth, I had three more elementary schools: Cedar Island (third and fourth grades), Fair Oaks (fifth grade), and Edgewood (sixth grade). It was insane. There were yearly school border changes because the suburbs were changing and boundaries needed to be changed. 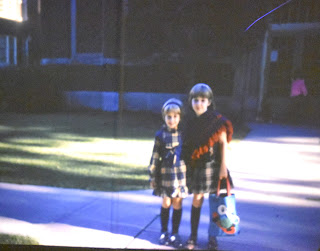 I loved seeing this photo of (L to R): me holding my brother, my sister, and our dog, Corgi. 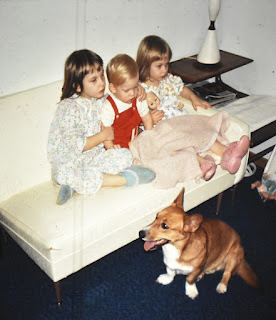 My mom used to sew all of our Halloween costumes. This one was my favorite one - a kangaroo. It's not the clearest pictures, so the little joey in my kangaroo pouch isn't as visible as I hoped it would be. 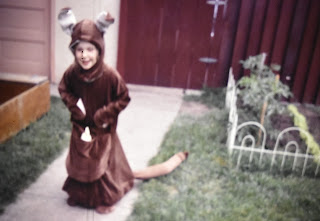 Getting in the holiday spirit, my handmade stocking was made by Grandma Olive (she had made my stocking during the summer of 1966 - either before or shortly after my birth in June. She died in August. So, this was an extra-special stocking). My mom made matching stockings for my sister and brother using the same concept as mine. 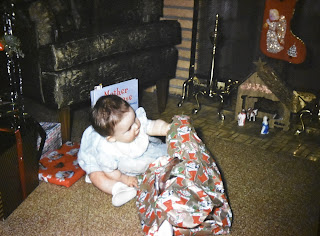 This is a better picture of my stocking. I would have been about four or five years old in this picture. 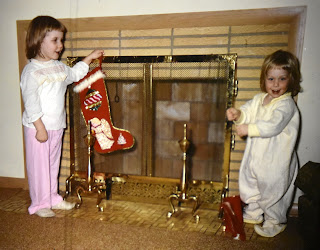 If this doesn't give kids nightmares, I don't know what would. The Santa that visited us at a friend of my grandma's home wore a mask. I swear that mask doesn't even have openings for the eyes. It would have to, but it sure doesn't look like it.
Apparently, we are either in shock or fascinated by this masked Santa. Actually, now that I look at the picture, I'm wondering if this was supposed to be St. Nicholas since he is using a cane. 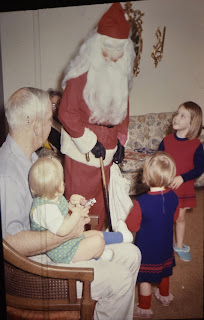 Fear set into my brother. It's probably St. Nicholas/Santa's lack of eyes in the mask. Apparently, the mask isn't bothering my sister or me. 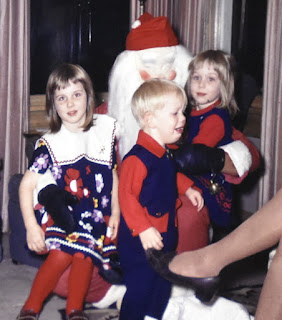 This is our first Christmas in our new home in Plymouth in 1974. I'm in the middle with the curlers under my mom's hair bonnet. 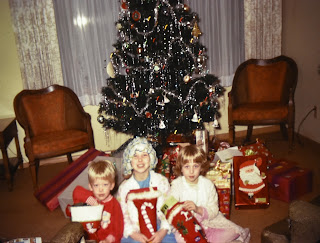 So those are some of the 200+ slides we looked at on Thanksgiving this year.
On the day after Thanksgiving, Sophia, Nessa, and I went to Feed My Starving Children to pack food. We were at a table with about eight other people. This was a hard-working group of volunteers who ended up packing 26 boxes of food for children in El Salvador. We have packed food on the day after Thanksgiving for three years now and have really enjoyed doing this. It's a meaningful way to share our time and give children who are hungry or starving healthy meals. 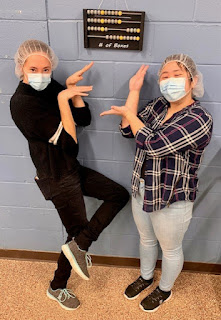 After packing food, we went to Momo Sushi - our traditional meal two years in a row now. We had a bento lunch box with a variety of food which we all enjoyed. 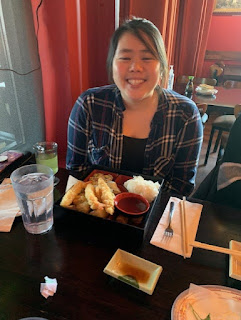 The sunset that night was beautiful. This is the end of the sunset, so the colors are not as vibrant at they were 15-25 minutes earlier that evening. 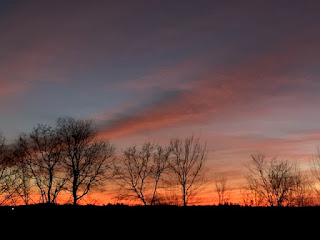 On November 26th, we celebrated the anniversary of Sophia's adoption day. It's hard to believe that we adopted her 21 years ago. (For Olivia it was 19 years ago on the 17th.) 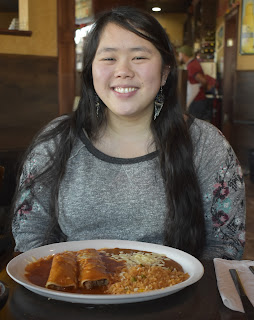 Posted by Harvest Moon by Hand at 8:52 PM

What great pictures! Love the ones when you were little and younger. I remember brush rollers and sitting under the hair dryer bonnet!! Took a long time but was better than sleeping on them. How fun to find pictures you had never seen before!!