On Swap-Bot, there is a Photo Scavenger Hunt that I thought sounded fun. There was a list of ten items from which participants could choose five that they wanted to photograph. (I chose eight items since I had images for them.)

In addition to the photograph, a little bit of information (e.g., where did I take it, is it part of a series of photos) should be included.

This photo is of firefighters from two local fire departments doing a waterball competition at our community festival a couple of weeks ago. There are three firefighters on each team and they are trying to move a metal ball past a mark on the opposing side. If they do, they score a point.

It is very challenging for the firefighters to see where the metal ball is because of the water that is spraying in all different directions around them. There was a large crowd around the rink cheering the team. It was a lot of fun to watch.

This is one of many Maximillian sunflowers that are growing in the butterfly garden in the backyard. The pollinators - especially bumblebees - love these sunflowers. As the days and evenings get cooler, I'm noticing the bumblees' bodies slower down...almost as if they are sleeping in the center of the flower. 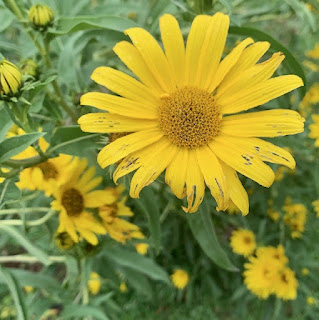 This is my team of volunteers who were marking the booth space for one of the vendors at Taco Daze - the major fundraiser/community event for our Lions club earlier this month. 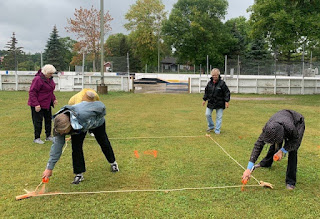 There was a little break in the rain, so we worked quickly to get as much as we could marked. Thankfully, just as we were finishing up with marking the last vendor space, it began to rain.

A Plate of Food

This was the first dinner that we had when we went to London. It was semi-fast-food Mexican dinner that was quite tasty. 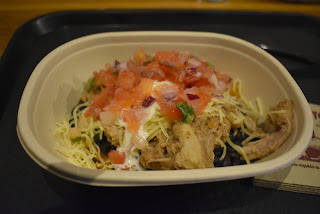 Although this was a good meal, what I enjoyed more while in London were the Indian meals. They were so flavorful and unlike anything that I can find near where I live.

We have been seeing anywhere from one to three deer almost every day during September. The deer walk basically the same path from east to west across our front yard. Our Ring doorbell catches the images of the deer walking the path during the day and night. They eat the grass, pears, and apples in our front yard. 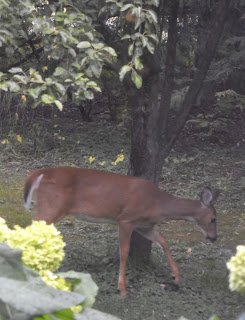 This deer is under our pear tree. She stayed around it for quite a while and I enjoyed watching her find and eat food. She slowly walked away under the tall pine trees that are to her left and in front of her.

This is one of my favorite pictures of Stillwater - a city about 25 minutes from where we live.

It was a very calm day, so the St. Croix River was still. This made it a perfect day to capture a reflection of the north part of town in the river.

A Statue or Sculpture

This is a sculpture at Franconia Sculpture Park in Chisago County, Minnesota. I loved the wirework of this huge sculpture and how the sky and clouds could be seen through the wires. 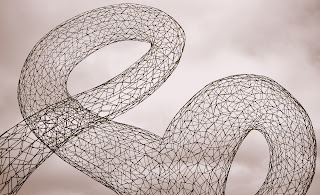 There are some permanent installations at Franconia Sculpture Park and others that change. So, no matter how often a person visits the park, there is always something new to see.

These were storm clouds that were moving in from the west in May 2008. This was a serious storm that did a lot of damage to the land (especially trees) as well as to homes, barns, and outbuildings. Although we have had strong storms since then, nothing compares to this storm.

We felt very fortunate that the damage wasn't worse than it was. Although we needed a new roof and siding, we could have lost our entire home like many people did just 10-15 miles southwest of our home.
Posted by Harvest Moon by Hand at 8:51 PM