This is the final year of Olivia's homeschooling and we are listening to the works of nine composers this year. The first one who we read about and listened to three works of is Ethel Smyth.

According to Wikipedia, Dame Ethel Mary Smyth was born on April 22, 1858, and died on May 8, 1944. She was an English composer and member of the women's suffrage movement. Smyth's compositions included works for piano, songs, orchestral works, chamber music, and operas. 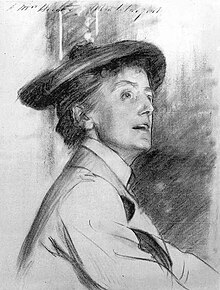 Smyth was marginalized as a "woman composer," as though her work could not be accepted as mainstream. Yet when she wrote more delicate compositions, they were criticized for not measuring up to the standard of male composers. Nevertheless, she was granted a damehood, the first female composer to be honored in this manner.

When she was 17 years old, Smyth first studied privately with Alexander Ewing. He introduced her to the music of Wagner and Berlioz.  After a major battle with her father about her plans to devote her life to music, Smyth was allowed to study at the Leipzig Conservatory. However, she left after a year because she was disillusioned with the low standard of teaching. While she was at the Leipzig Conservatory, she met Tchaikovksy, Grieg, and Dvorak.

Her final major work was the hour-long vocal symphony The Prison that was first performed in 1931. In addition to composing, she was a writer and, between 1919 and 1940, she published ten highly-successful, mostly autobiographical, books.

In 1910, Smyth joined the Women's Social and Political Union (WPSU) which advocated for women's suffrage. She gave up music for two years to devote herself to this cause. Her "The March of the Women" that was written in 1911 became the anthem of the suffragette movement.

In 1912, WPSU members went to break a window of the house of any politician who opposed votes for women. As one of the 109 members who responded to this call, Smyth attacked the home of Colonial Secretary Lewis Harcourt. Harcourt said that if his wife's wisdom and beauty had been present in all women, they would have already won the vote.

During the stone-throwing, Smyth and 100 other women were arrested and served two months in Holloway Prison. She said, in her book, Female Pipings in Eden, that her prison experience was of being "in good company" of united women "old, young, rich, poor, strong, delicate." They were putting the cause they were imprisoned for before their personal needs.

Smyth said that the prison - including the hospital ward - was infested with cockroaches. She was released early, due to a medical assessment that she was mentally unstable and hysterical.

Below are the three songs Olivia and I listened to, and her reaction to them:

- Very upbeat with the fast pace.

- The lyrics were good. Even without the pictures (on YouTube), you could figure out what she was fighting for.

- I liked it. It was nice. Very different from some of the other pieces we've heard.

- Feels like music during a fight scene in a movie.

- It sounds like someone is trying to sneak around and things are going badly (at 1:20).

- Feels like it is music from the Wizard of Oz...especially when they were sneaking around the witch's castle.

- Or it sounds like music from a play or a ballet recital. The whole piece would be played for the entire ballet. It has different feelings throughout it.

- There's a lot of variety in it. It makes it interesting. It keeps you on your toes because of how much it changes. There's no pattern to it.

- If you were going to play this on the piano, it would be challenging because there doesn't seem to be no repetition. You would have to learn the whole piece. It would be extremely hard to memorize this piece.

- It was a nice ending with the drums in it.

-     - This seems kind of sad and depressing…maybe more melancholy.

-    - This is more of a soothing piece than the overture.

-    - This seems less dramatic than the last piece.

-    - I can hear the strings better, but I can hear where the piano is playing solo.

-    - I don’t think they have the violin or cello playing by themselves – it’s just the piano.

-    - The ending just kind of softly went out versus the last one that went out with a bang.

Posted by Harvest Moon by Hand at 3:01 PM

Nice to learn about this composer, why can't men accept that women can be good at all things? Have a great day, Valerie