We're back doing composer studies again this year. With Sophia off at college, Olivia and I are taking some time to revisit things we used to do in elementary and junior high school. One of things we did was composer studies.

Adapted from the Charlotte Mason education method, we listen to six pieces by a composer; and the girls give their feedback about what they heard and if they enjoyed it. They learn a bit about the composer's life and see his/her picture.

The goal isn't to have the girls well-versed with the lives and repertoire of composers from the past and present. Rather, it is to introduce them to pieces they may hear throughout their lives, know the composer who wrote the piece, and have a greater appreciation for the music that they learn to play on the piano (or, in Sophia's case, the harp as well).

This month, we focused on Antonio Vivaldi who was born on March 4, 1678, and died on July 28, 1741. He was an Italian Baroque musical composer, virtuoso violinist, teacher, and priest. 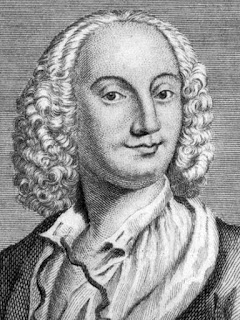 According to Wikipedia, Vivaldi was born in Venice, and baptized immediately after his birth at his home by the midwife. This led to a belief that Vivaldi's life was somehow in danger either due to his poor health or to an earthquake that shook the city that day. In the trauma of the earthquake, Vivaldi's mother may have dedicated him to the priesthood.

Vivaldi was "...regarded as one of the greatest Baroque composers, and his influence during his lifetime was widespread across Europe. He composed many instrumental concertos, for the violin and a variety of other instruments, as well as sacred choral works and more than forty operas. His best-known work is a series of violin concertos known as the Four Seasons."

Vivaldi wrote many of his compositions for the all-female music ensemble of the Ospedale della Pietà, a home for abandoned children. Vivaldi worked there as a Catholic priest for 1 1/2 years; and was employed there from 1703 to 1715 and from 1723 to 1740. During these 30 years, Vivaldi composed most of his major works while working there.

The purpose of the Ospedale della Pietà was to give shelter and education to children who were orphaned or abandoned, or whose families could not support them. The boys, who learned a trade, had to leave when they reached the age of fifteen. The most talented among the girls, who all received a musical education, stayed and became members of the Ospedale's renowned orchestra and choir.

During his lifetime, Vivaldi was popular in many countries throughout Europe, including France, but after his death his popularity dwindled. After the end of the Baroque period, Vivaldi's published concerti became relatively unknown, and were largely ignored.

The resurrection of his unpublished works in the 20th century is mostly due to the efforts of Alfredo Casella, who in 1939 organized the historic Vivaldi Week. Since World War II, Vivaldi's compositions have enjoyed wide success.

The six pieces we listened to include four well-known pieces from The Four Seasons.

We started with the most easily-recognized song, Spring. Olivia said:
- It sounds familiar. I don’t know the same song. (Looking at the CD case:) Is this The Four Seasons? It sounds like it could be Spring or Summer. (It was Spring.)

We moved onto Summer. Olivia didn't have much to say about this song:
- I don’t know if I have ever heard Summer before.

Next was Autumn. Olivia said:
- I think I might have heard Autumn. I like this one. It sounds like I’ve heard it before. It reminds me of a ballroom full of people and they are doing a waltz.

Last of The Four Seasons was Winter. Olivia said:
- Winter sounds very mysterious – like you’re trying to sneak up on someone. The faster part sounds like a chase. I like this one the second best because it sounds like something I would listen to more. I like the tempo or speed of this one.

We listened to Gloria in Excelsis Deo. Olivia said:
- I thought it would just be the instruments and not any singing. I think I would like to hear it without the singing.

The final piece we listed to was Concerto in G Major for Two Mandolins and Orchestra - Allegro. This one we watched the video of as we listened to the music. Olivia said:
- I liked being able to see what they were playing. I thought it was some kind of string instrument not the size of banjo or guitar.
Posted by Harvest Moon by Hand at 2:59 PM

Most of Vavaldi's work is too frenetic for me. I do think they use the first part of Spring in something on PBS, but I am not sure what. :)