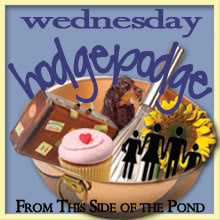 From This Side of the Pond
1. Have you ever been fishing? Did you catch a fish? If so did you keep it or throw it back? If you haven't been fishing is that something you'd like to try?

Fish out of water, big fish in a small pond, living in a fishbowl, packed in like sardines, this is a fine kettle of fish, plenty of fish in the sea, fish or cut bait...which fishy phrase most recently applies to some area of your life?

When I was in elementary and junior high school, my sister,  brother, and I would fish off our dock on Bass Lake in Plymouth. We'd catch sunnies which my dad would prepare and my mom would cook for dinner. Sometimes we'd catch bullheads and catfish which my dad would take off the hook and toss back.

When I was in college, I went on a date with a guy who took me fishing. I caught a sheepshead (also known as a freshwater drum). It was the largest fish I had ever caught. Didn't take a picture of it because it was before the age of cellphones. 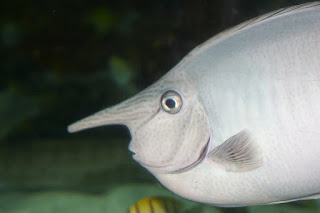 This isn't a sheepshead fish.
It's a blue-spined unicorn fish at the Minnesota Zoo.
Thought it looked rather human-like with its
big "nose,", tiny lips, and big eye.
In terms of sayings, packed in like sardines would be most applicable. As I look at the bed, two of the dogs and one cat are either right next to me or sitting on my back. They have the whole king bed to choose from to have more space. They choose to be right here...squished - although comfortable - next to one another.

2. What's something you're always fishing for in your purse, wallet, desk, or kitchen junk drawer?

In the order above: my cell phone, my checkbook, an envelope, and twist tie.

3. Your favorite fish tale or movie?

I couldn't think of a fish movie, so my next thought was ocean. Immediately, Dolphin Tale came to mind. It's based on a true story, and follows the progress of a dolphin named Winter who lost her tail. She not only survived but thrived at Clearwater Marine Hospital. A boy named Sawyer (who found Winter tangled up in fishing line) faithfully visits her. He also becomes friends with a girl named Hazel and her family. 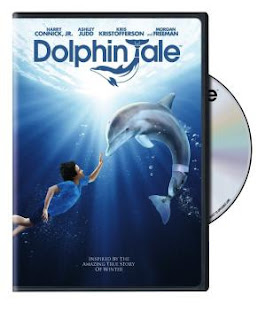 I like this movie because it looks at how - despite challenges - you can overcome obstacles.

4. Are you sunrise, daylight, twilight or night? Explain why you chose your answer.

Sunrise. Definitely am a morning person.

5. What's the oldest piece of clothing you own and still wear?

I still have t-shirts from the non-profit organization I started by back in the late 1990s. The t-shirts are probably from around the year 2000 - so 16 years old. I have a blue hooded sweatshirt too that is so comfortable. Unfortunately it's on its last legs after 20 or so years.

6. We've got one more month of (officially) winter here in the Northern hemisphere. Are you feeling the need for a getaway? What's been the best and worst part of your winter so far?

Actually the weather has been unseasonably warm this year. Yesterday it was almost 60 degrees. The lakes are opening up; and ponds and creeks are water and not ice now. This is beautiful weather - anything from the 30s to 70s is my ideal temperature range. I have no reason to go anywhere else. 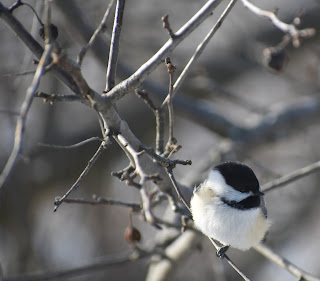 Have been enjoying listening to the birds singing.
There are cardinals around which I'm very happy about.
The black-capped chickadees are prolific and
like eating at the feeders around the yard.
The best part of winter has been that there were only a handful of days under zero. That, too, is the worst part - those days are very difficult on the horses and people. It's just brutal when the temperature is 10 degrees below zero or colder and the windchill is 20+ degrees below zero.

7.  The Wednesday Hodgepodge lands on National Margarita Day...will you be celebrating? Frozen or on the rocks? Are you a Jimmy Buffet fan? If so, what's your favorite JB tune?

Nope...no margaritas or alcohol for me. Stopped drinking in October 1991. It will be 26 years this October.

I never really got into music by Jimmy Buffet. That being said, he did write the soundtrack for, and co-produced and played a role in the movie Hoot because conservation is an issue that's important to him. 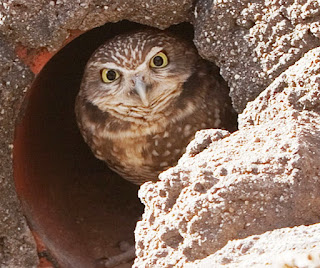 Burrowing Owl.
Source
Sophia, Olivia, and I read the book and saw the movie which we all liked. It has a very good message and shows the power that kids can have to make an environmental difference.

8.  Insert your own random thought here.

We've been having such beautiful sunsets this past week. Almost every night, the sky is transformed into this magnificent light show. 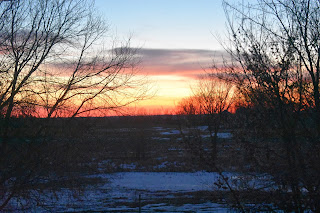 This was taken last week - before the snow in the pond melted and the heavy rain that has created a rather large pond. There were trumpeter swans in the nearby field - where Olivia and I saw them a few years ago. Yesterday, two geese were in our pond swimming and putting their wings under the water. They would then spread their wings and shake their bodies out. It looked like they were enjoying the water after flying back north.

What's odd is that we never see geese this early in the season. April is the typical time for their return. Not February. The trumpeter swans come through in March and April.

Posted by Harvest Moon by Hand at 7:02 AM

Such a beautiful sunset! We've had very mild winter weather, too, and not any snow. This week, we've reached the 70's and it's felt wonderful, but the pollen count is exceptionally high. I'm your newest follower!:)

What a gorgeous sunset! Enjoyed your answers. Have a great week.

Thanks for stopping by my blog, today, and leaving a comment :)
I enjoyed the movie Dolphin Tale, too. Such a great story.
I guess the mild winter brought the swans back early? We have azaleas blooming everywhere. That's a first for February.
Enjoy your day,
Kathy (Reflections)

You're the first one on the Hodgepodge posts I've read so far to mention Jimmy Buffet's role in Hoot. I'll have to read more about that - I had no idea.

I am always up in mornings but I believe I am an day or twilight person that is my relaxing me time
come see us at http://shopannies.blogspot.com

We too have had a very mild winter. That unicorn fish is so strange. I've never heard of one before. Your sunset picture is gorgeous. Sunsets are one of my favorite things about each day.

I love that movie too. What a gorgeous sinset!

The twist tie made me smile. It's always interesting to see what people carry around with them, and their uses for some items. Thanks for visiting my blog today! :)