This past week's focus for the Outdoor Hour Challenge is on tulips, crocuses, and daffodils.

One of my favorite bulbs is the tulip. It reminds me of a trip that Sophia, Olivia, and I took with my dad and mom about 5 1/2 years ago to Pella, Iowa. They have a big tulip festival there, and we went about a week before it happened so that we could enjoy the beautiful tulips without the crowds of people. 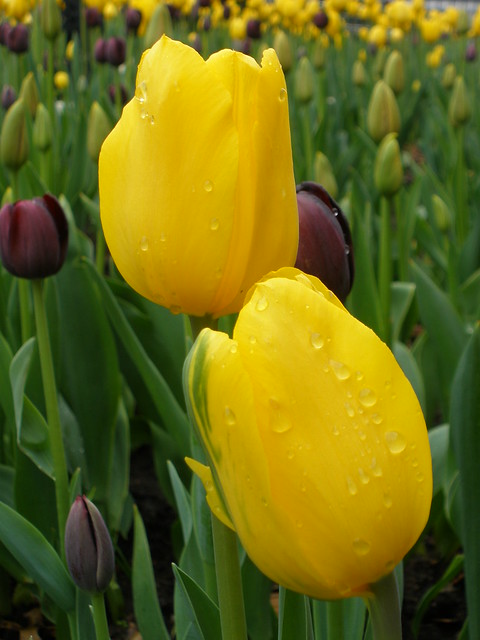 We read about tulips in the Handbook of Nature Study since we had some tulip bulbs that we were going to plant. Some things we wanted to remember about tulips include:
=> Tulips came from the Orient to Europe in the sixteenth century. One hundred years later, the Netherlands were buying and selling tulip bulbs at an almost manic level. Rare varieties of tulips were going for $1,800...per bulb!
=> In the red varieties, there is a six-pointed star at the heart of the flower, usually yellow or yellow-margined. 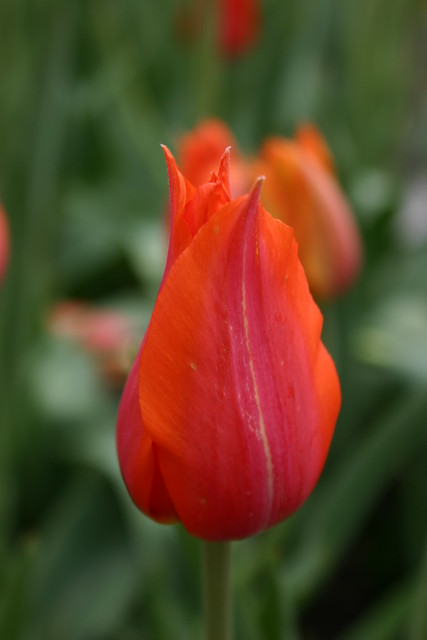 
=> In the heart of each bulb is a flower bud, sheltered by the fleshy leaf-layers around it, which furnish it food in the spring.
=> The true roots are below the bulb.
=> Tulips will grow in almost any soil as long it it is well-drained so that the roots don't rot.
=> Make sure that the bulb is upright and doesn't fall over on its side.
=> Bulbs can be planted in September and October. The more root growth the bulbs have before the ground freezes the better. (Note: We planted the bulbs perhaps a bit too late since the ground froze within days after we planted the bulbs.) 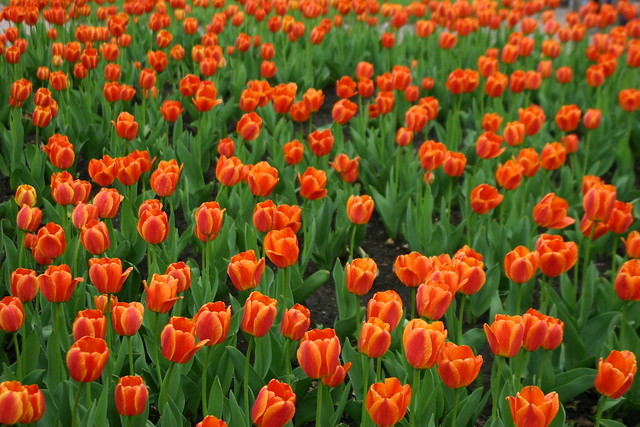 Everywhere we looked in Pella, Iowa, there were beds of beautiful tulips.
(Taken on April 30, 2009.)


=> Blossoms should be cut as soon as the flowers wither so that the plant's energy can go back into the bulb.

Next, we read about crocuses in the Handbook of Nature Study. Some interesting facts about crocuses:
=> The crocus has a corm instead of a bulb. A corm is a solid, thickened, underground stem, and is not in layers, like the onion. The roots come off the lower side of the corm
=> The leaves number from two to eight, depending on the variety.
=> The petals and sepals are similar in color. The three sepals are on the outside and their texture is coarser than that of the three protected petals.
=> Crocus blossoms have varied colors: white, yellow, orange, and purple (striped or feather-veined).
=> The crocus multiples by its corms.
=> Crocuses need to be replanted every two or three years.
=> Crocuses can be planted in flower beds or in the grass. The flowers bloom and mature before the grass needs to be mowed. 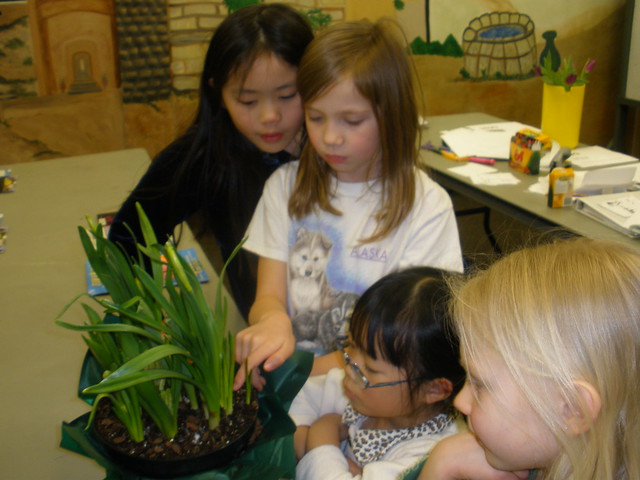 The girls with some friends at the homeschool co-op looking at spring bulbs.
(February 16, 2009)


Although we didn't plant daffodils, we still read about them in the Handbook of Nature Study. Some key facts to remember:
=> There are six segments of the perianth - three bright-colored sepals and three inner petals. These sepals and petals are different shapes and look like a corona or crown.

=> There is one flower on a stalk in the daffodils, compared with jonquils or paper-white narcissus that have two or more flowers on the same stalk. 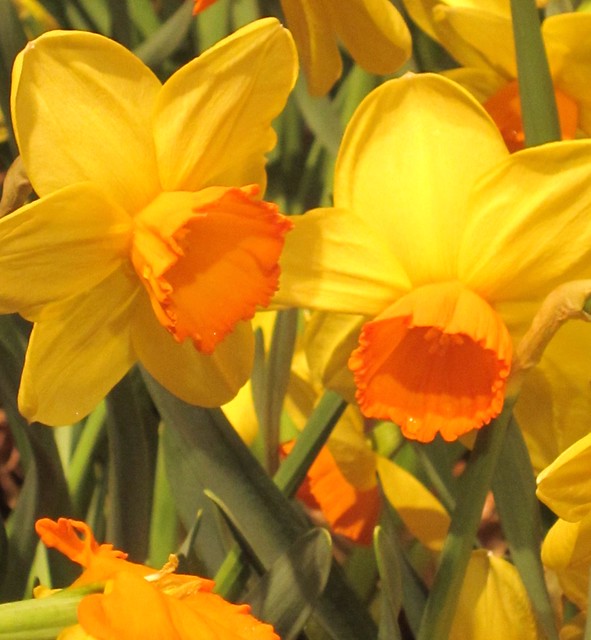 => The bulbs should be planted in September or early October, about four to six inches apart.

=> As soon as the surface of the ground is frozen in the winter, the beds should be covered with four to six inches in depth with straw mixed with stable manure. (Note: We did not do this when we planted the crocus, tulip, and hyacinth bulbs this year. It will be interesting to see if this step is needed for the other bulbs, or is something that we would do in the future when we plant daffodils.)
=> New bulbs are formed on the sides of the old one.
=> The leaves of the plant should be allowed to stand as long as they will after the flowers disappear so they will furnish the bulbs with plenty of food for storage.
=> The seeds shouldn't  be allowed to ripen because it takes too much energy away from the bulb.
=> The flowers should be cut as they are opening.

Each of the girls did an entry in their nature journal about tulips, crocuses, and daffodils.

For this week's nature journal focus, we spent time outdoors planting bulbs that will bloom in the spring. It was a great way to bring learning about flowers alive.

Sophia, Olivia, and I planted 70 crocus corms under the four big pine trees in the front yard. (I have always called them bulbs, but they are technically called "corms." Honestly, I don't see us using that term. They'll still always be "bulbs" to us.) 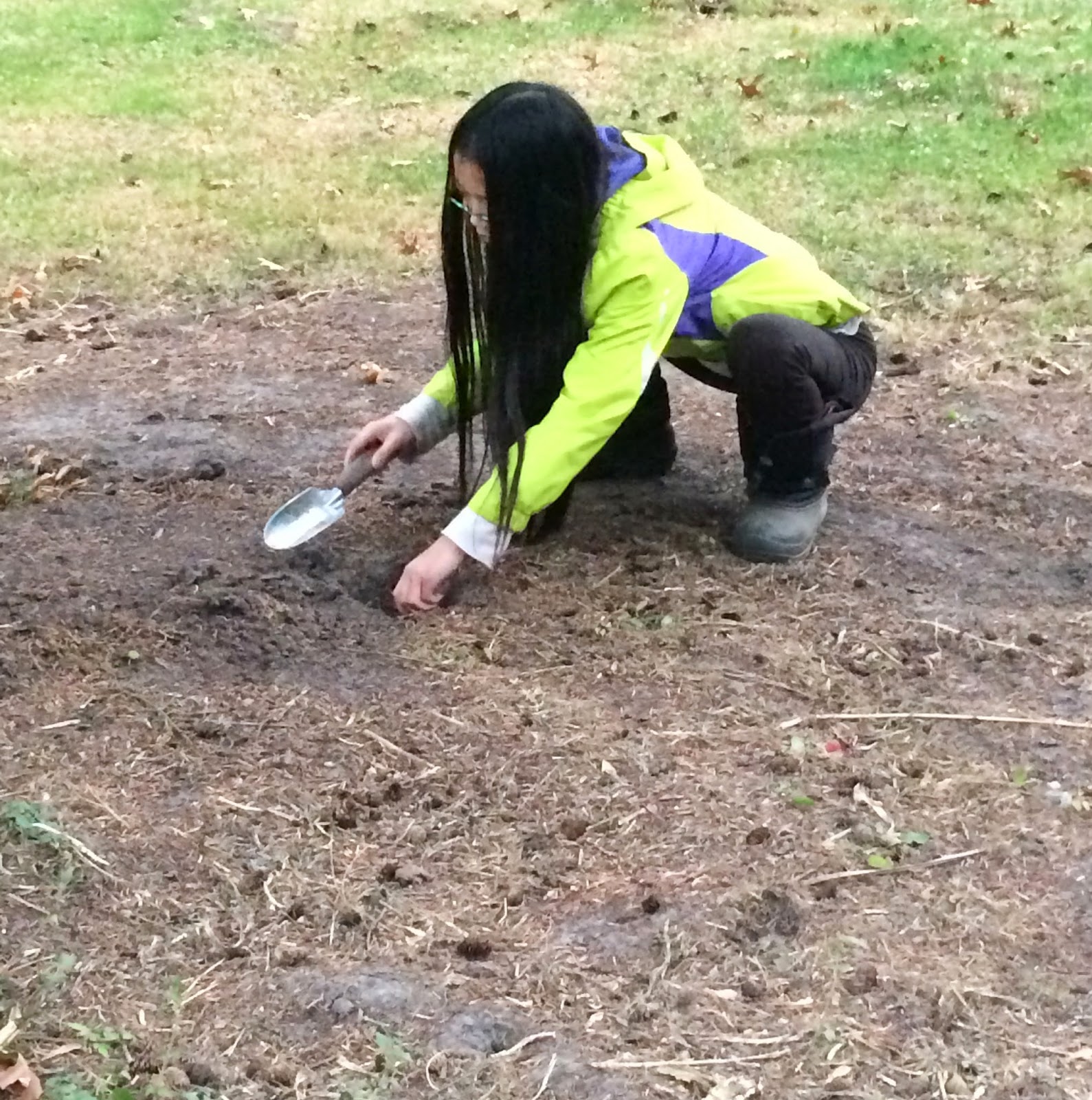 Olivia putting a crocus corm into the soil.

Looking at the trees now, I can envision the beautiful purple, yellow, and white flowers emerging in the spring after a cold, snow-filled winter. It will be a welcome sight! 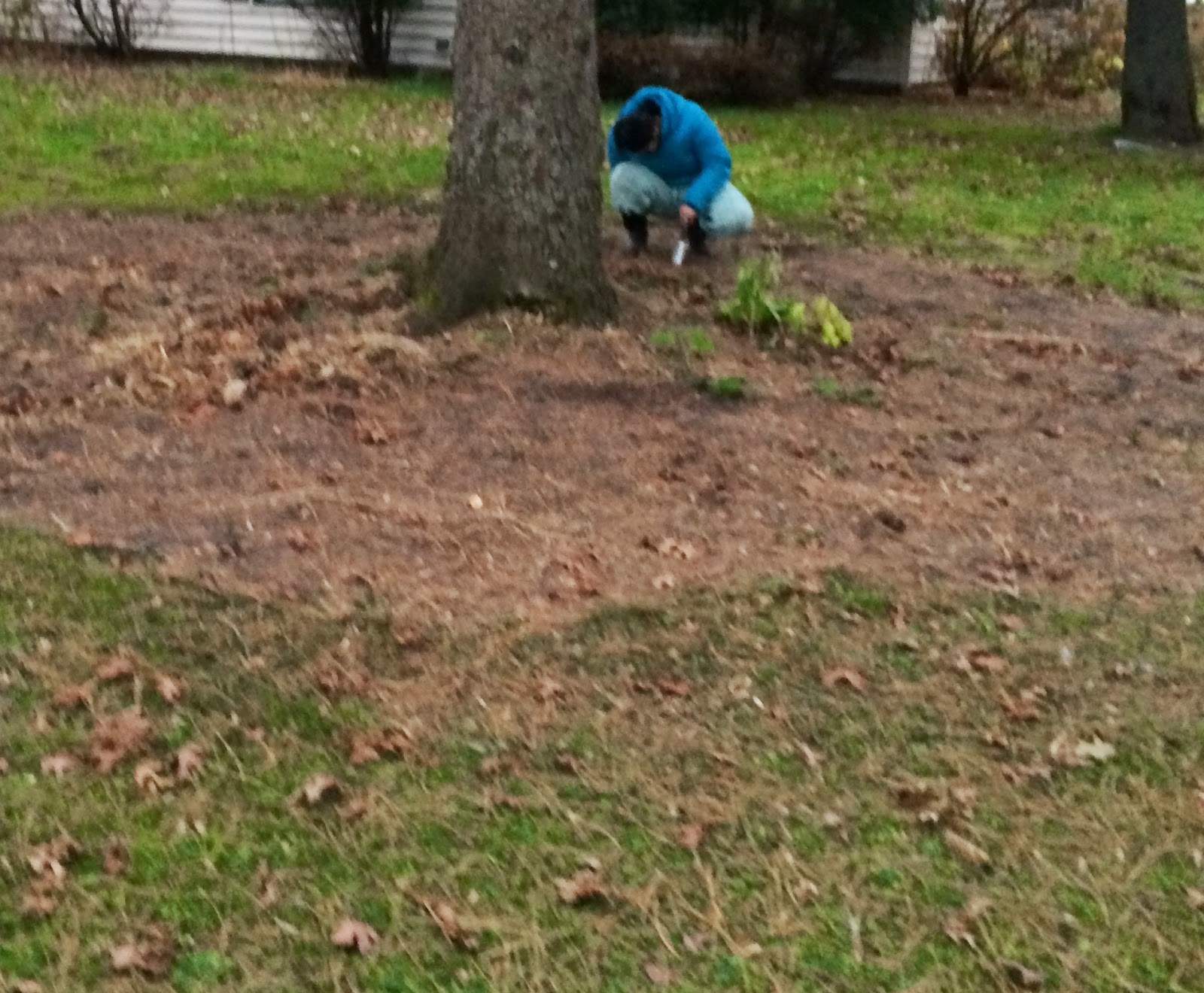 Sophia working under one of the pine trees.

Thankfully, the ground was still relatively easy to dig into. It hadn't completely frozen yet. 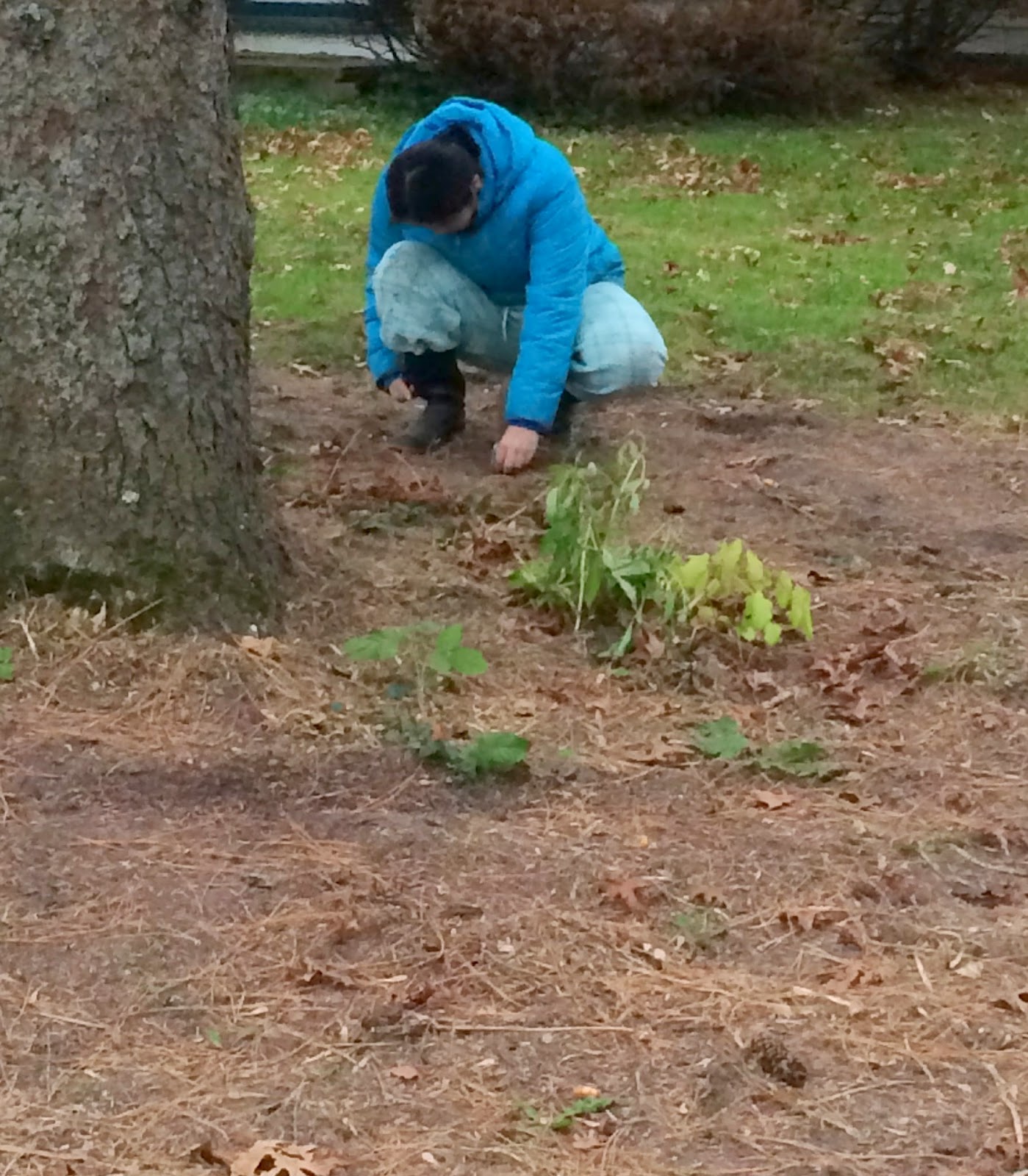 Sophia planting one of 17 crocus corms under the pine trees.

The soil under the pine trees is relatively "fluffy" since so many pine needles have fallen into it over the years. 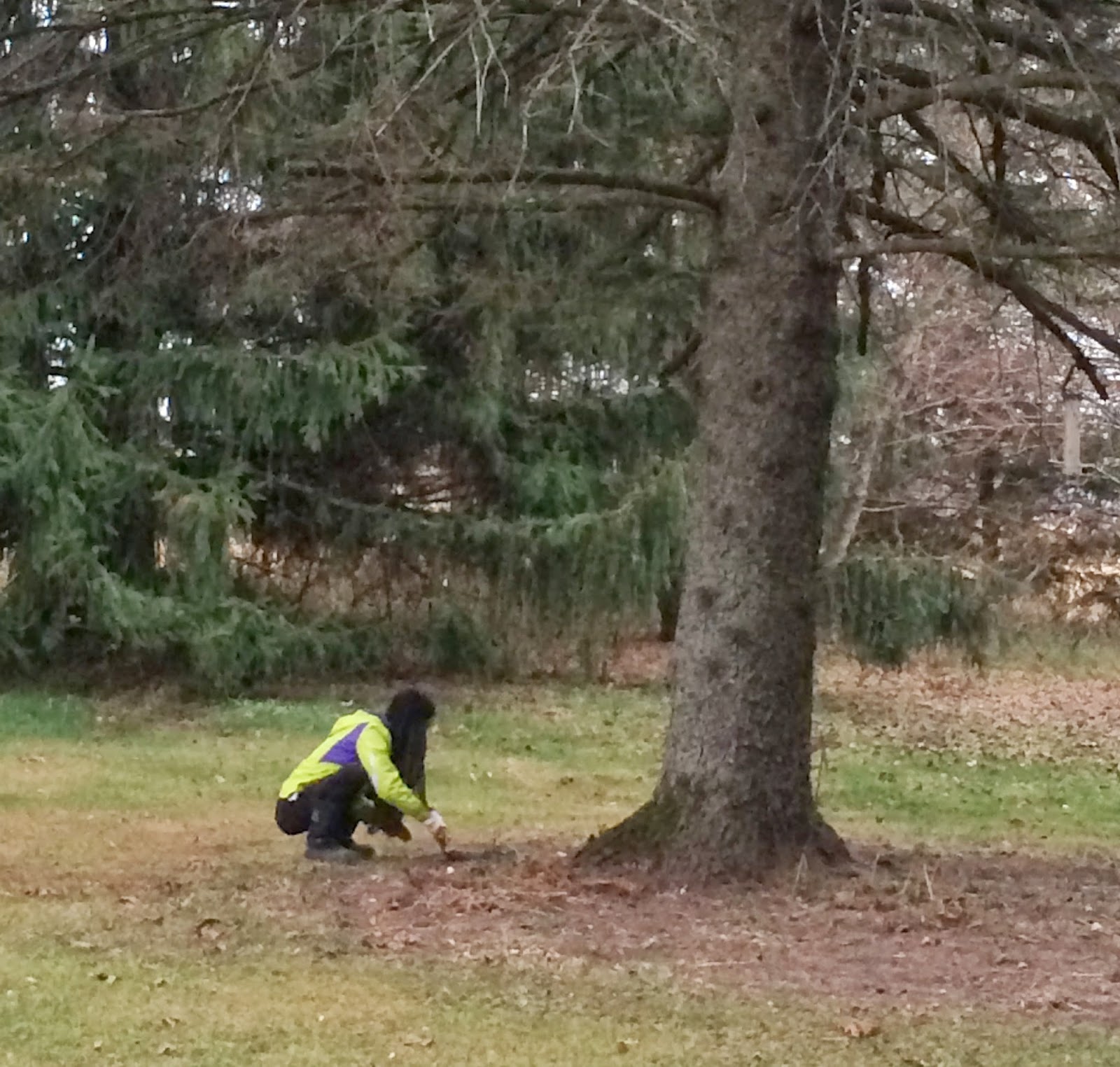 Olivia looks so small compared to the pine tree.

Under each tree there are about 17 bulbs. Seeing the bulbs in a bag and then seeing them spread out under the tree made me realize that we could have easily planted four times as many bulbs to give a fuller and more colorful look under the trees. 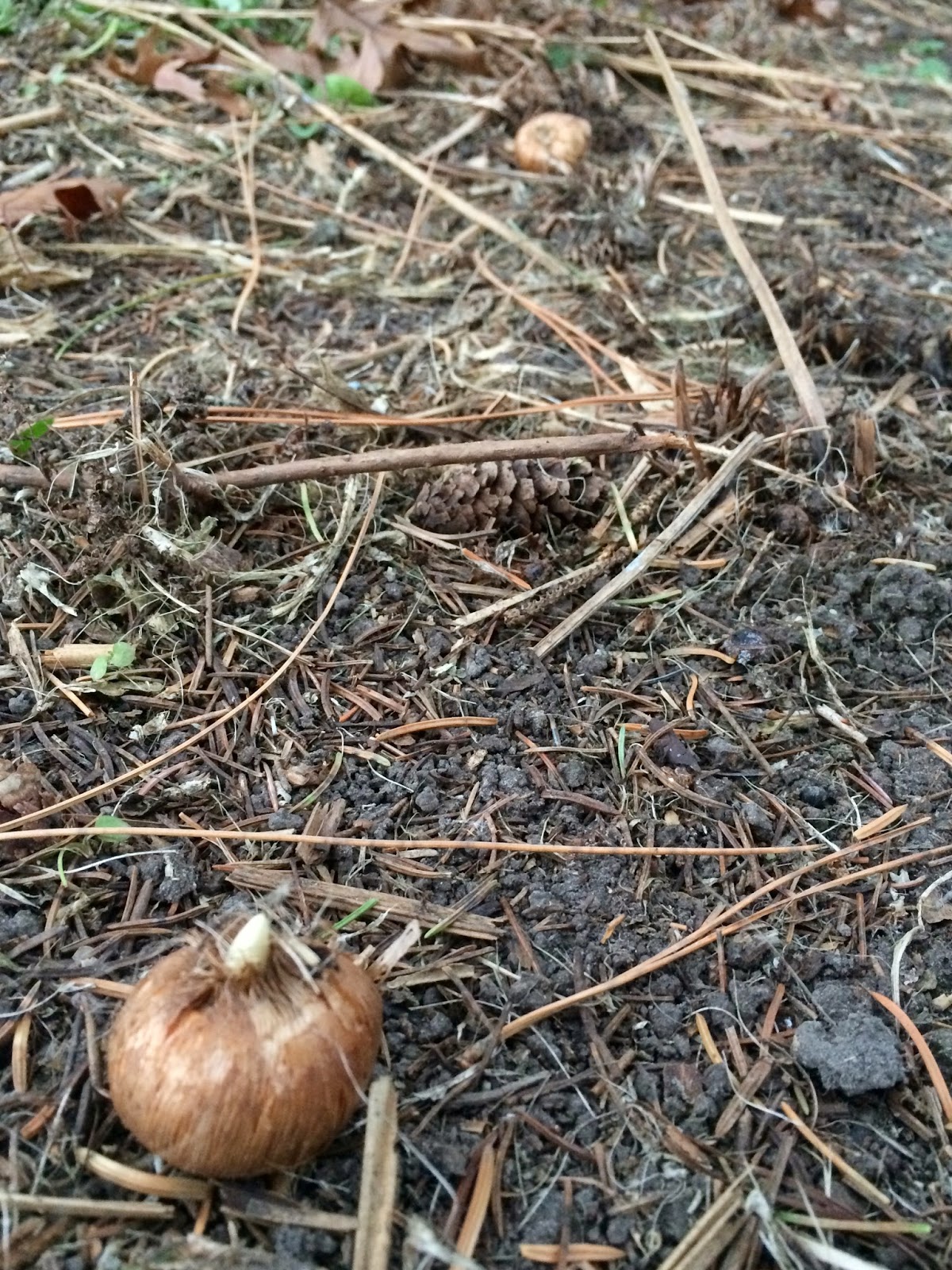 At least this is a good starting point in terms of a long-term vision. Each year we can add more bulbs under the trees. 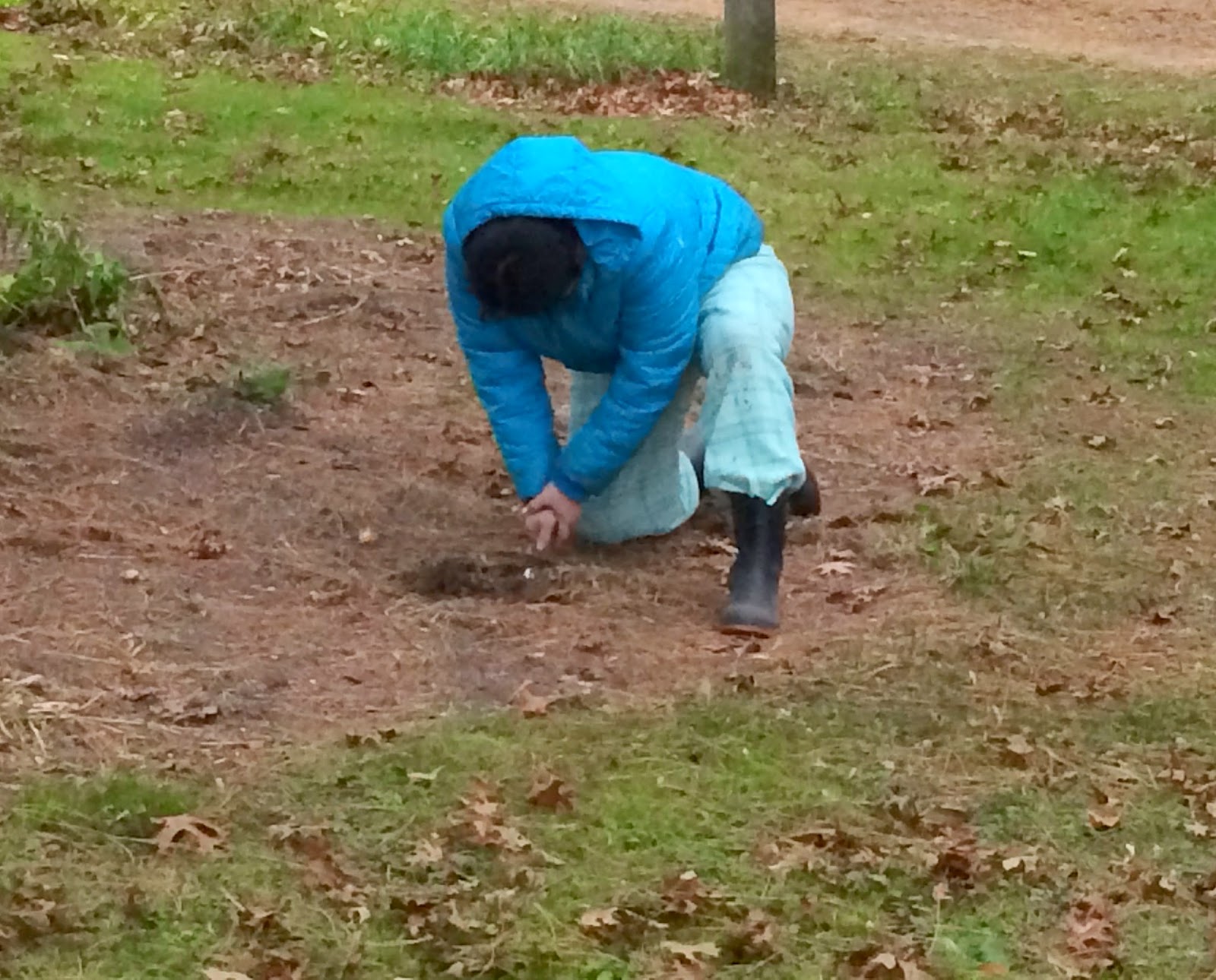 Sophia creating a nice space for the crocus' roots to grow.

Under the pine tree that's adjacent to the house on the northwest side, Olivia and I planted orange and yellow tulips with purple flowers. 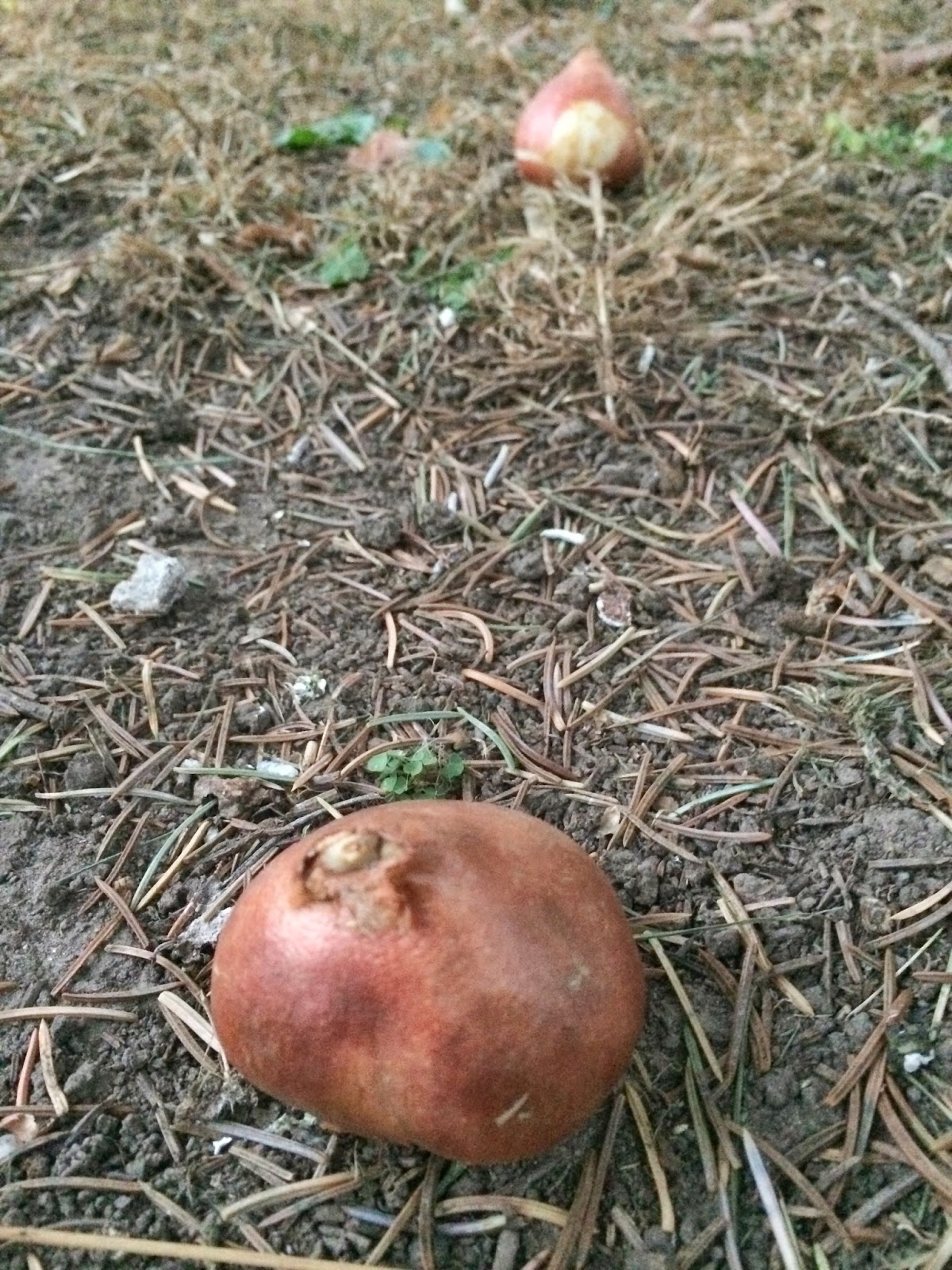 Two of the bulbs we planted by the pine tree
near the fairy house door.

The fairy house door is on the pine tree, and the tulips and purple flowers now will surround it in the spring - like a miniature, colorful front yard with the secret little door hidden among the colorful flowers.

This winter we can spend some time thinking about ways we can enhance that space and make a bigger fairy garden. 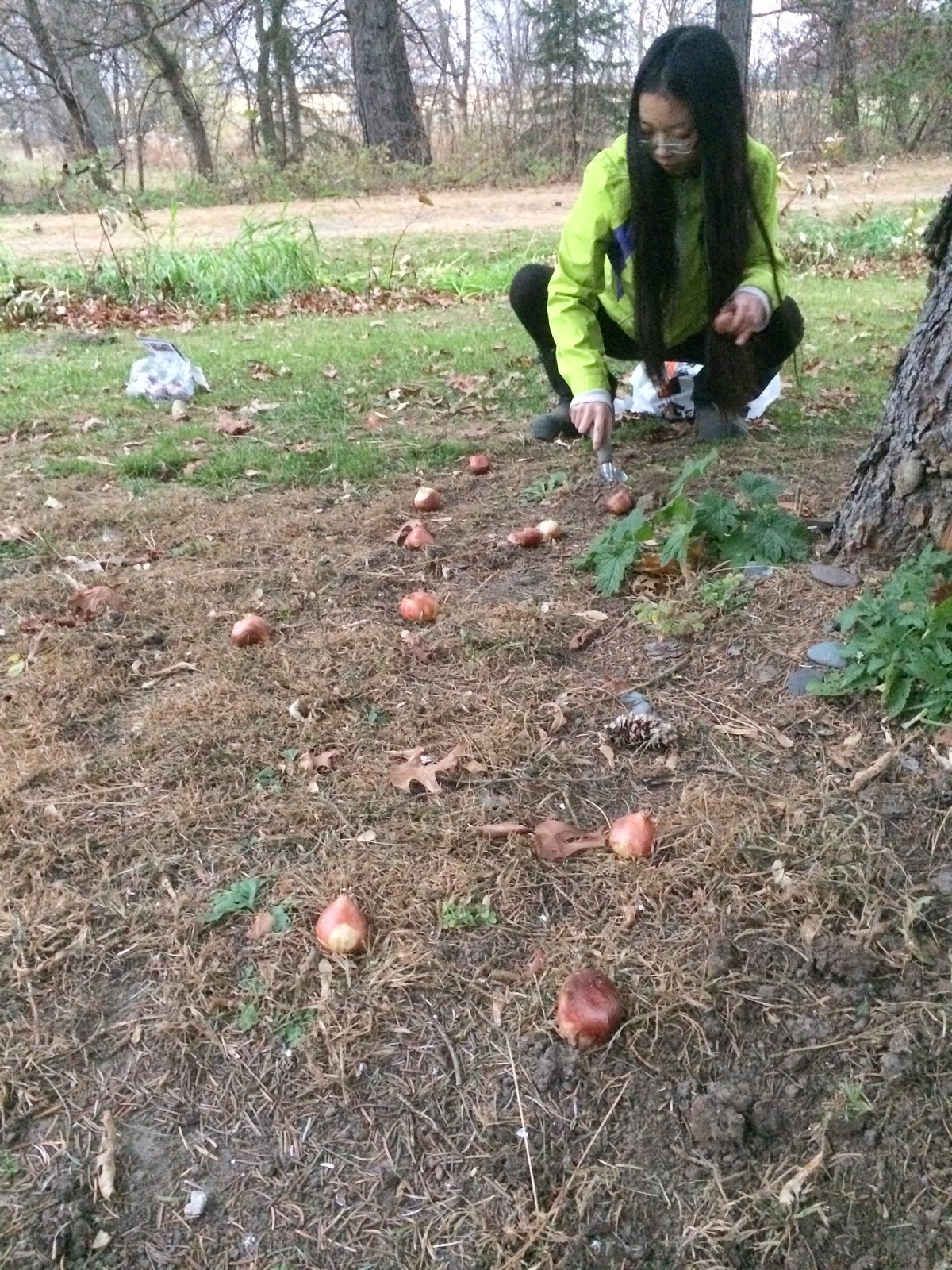 This was a smaller area in which to work,
so the tulips will be closer together.

As we were planting the bulbs, Olivia came across one that was already starting to shoot out another section. She wondered if it was still okay to plant. It is. Hopefully we'll see two flowers instead of one in the garden. 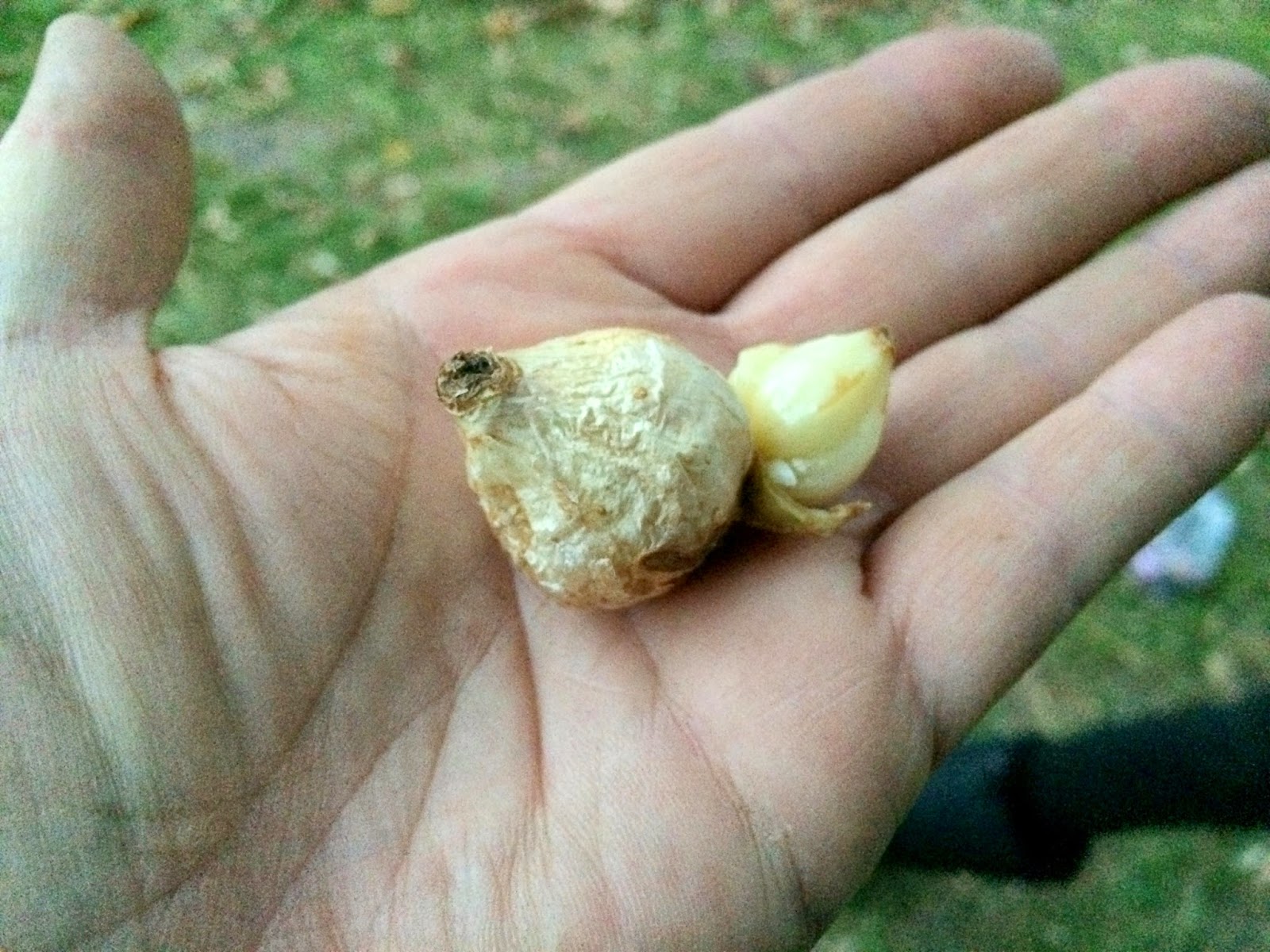 Hopefully we'll have a bonus flower in the spring.

Because the sun was setting and it was getting dark, we decided to wait to plant the remaining tulips until Tuesday morning. I planted the tulips by the door of the mudroom (our main entry to the house) to add some color to that area. It will be nice to have some color there since we are at that entryway a lot with letting the dogs out; and going in and out of the home.

Then I planted two different types of bulbs next to the driveway. If all goes well over the summer, we should be enjoying tulips in the back and muscari in the front. The flower garden is visible from several rooms in the home, so it will be nice to see the bright colors after a relatively colorless winter. 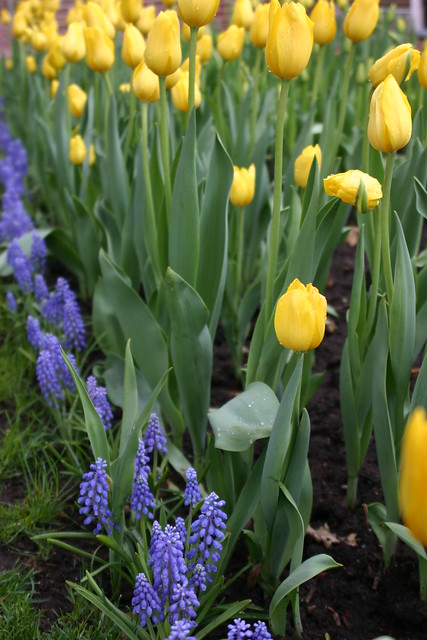 In about 150 days, we should see our front yard transformed by colorful flowers! What will be nice is that we can also cut some of these flowers and bring them indoors to enjoy their color and fragrance. 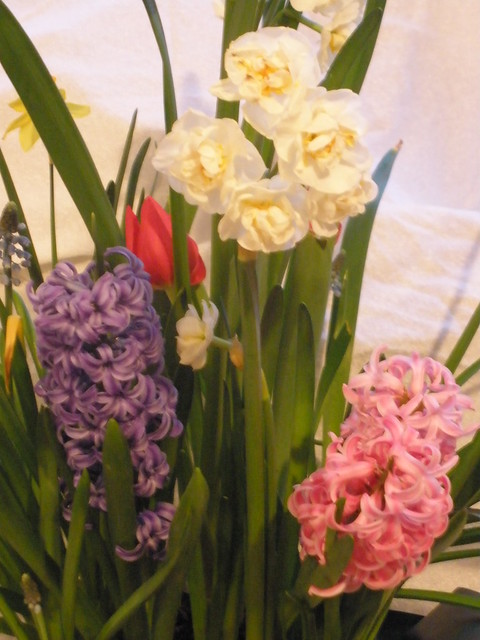 An indoor garden filled with a variety of fragrant, spring flowers.
(Taken on February 26, 2009.)

Perhaps later in November we will plant bulbs to force indoors. We've done this before and it always a joy to see the flowers growing and emerging indoors. We try to pick fragrant flowers, so the scent reminds us of spring time.

Posted by Harvest Moon by Hand at 8:40 AM