Sophia and Olivia are involved with the Raptor Corps program this year that is sponsored by and held at the Minnesota Raptor Center once a month from October through May (with the exception of December).

When the girls went to their first meeting in October, we saw an Eastern screech owl there. At first it looked like a stuffed animal or toy because it was so small. It wasn't...it was an adult female screech owl named Mestaae. 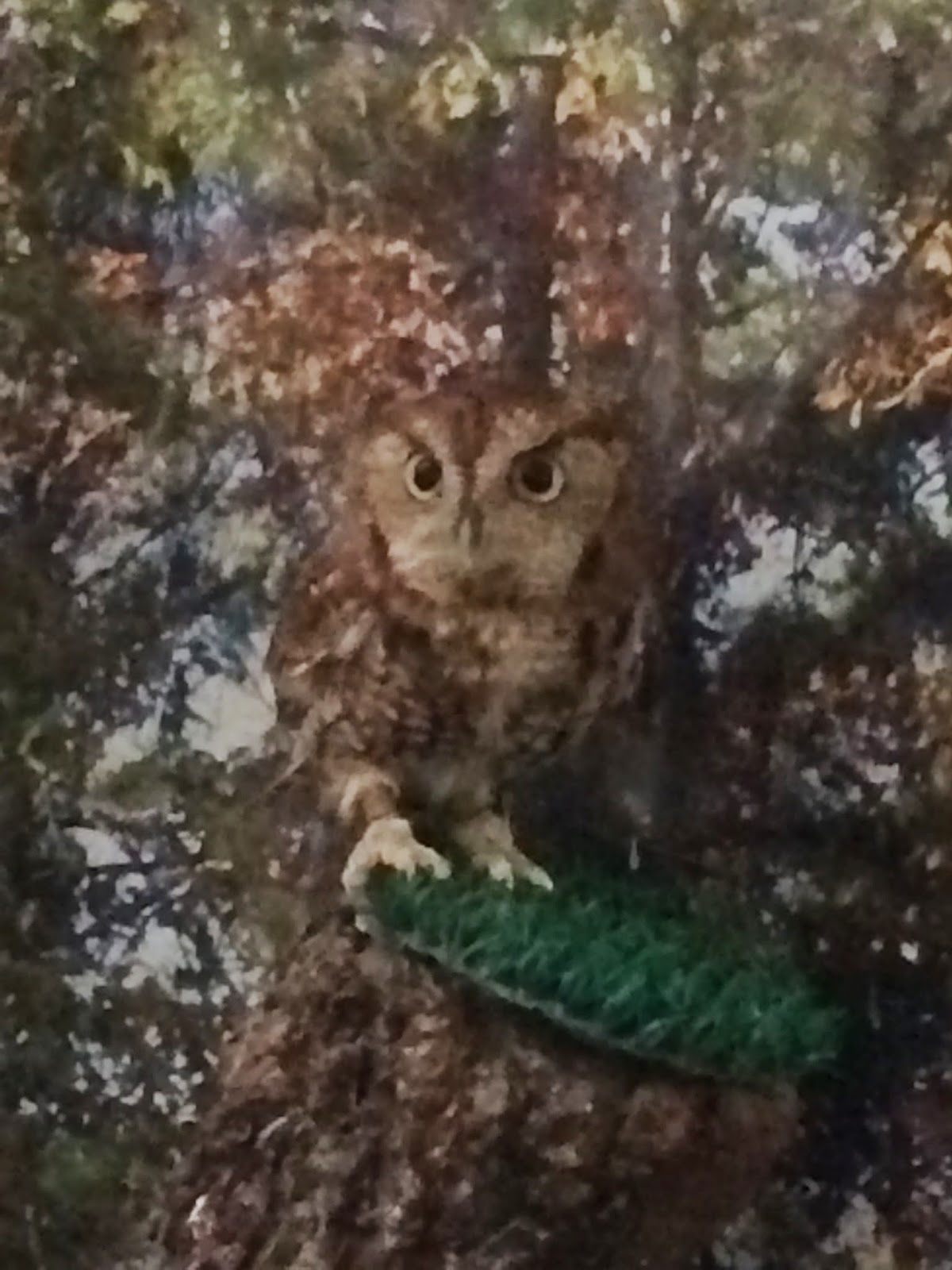 Screech owl at the Minnesota Raptor Center in St. Paul, Minnesota.
We were surprised at how tiny it was since
we've seen larger owls that live around our home.

Mestaae was hatched in spring 2008 and was found as a nestling outside of the nest. Unfortunately she was not brought to The Raptor Center quickly enough and became a human-imprinted bird. Due to this, she lost some of her human fear and does not display all the normal screech-owl behaviors that she needs to in order to survive. Therefore she will have to spend the rest of her life in captivity.

She weighs approximately six ounces - about the equivalent of 1 1/2 sticks of butter. Her name is a Cheyenne word for “spirit of the night/owl” and was chosen from over 800 entry suggestions.

We were curious to learn a bit more about Eastern screech owls, so we found information out them from the Minnesota DNR website:

=> This tiny gray or reddish owl can be found throughout southern and central Minnesota.
=> It is named for its surprising call, which can sound like a crying child.
=> It has ear tufts; and big yellow eyes and a yellow beak.
=> Like other owls, the screech owl has eyes that face forward. This gives it depth perception (the kind of vision you have when you look through two eyes instead of one).
=> They are 7 to 10 inches tall.
=> When flying, their wingspan can stretch up to 2 feet across. 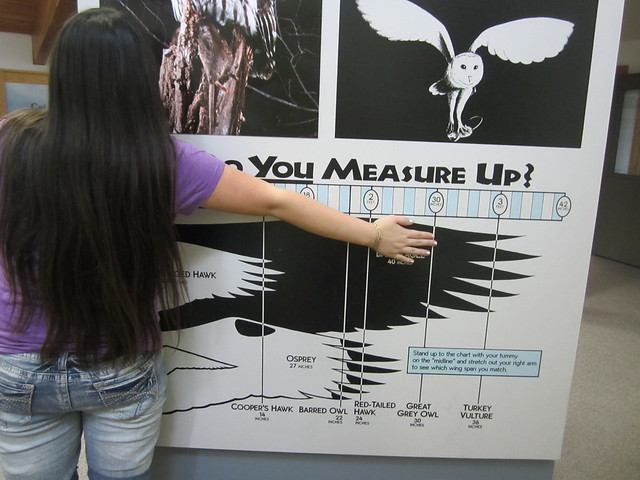 Different types of owls and raptors are shown on this display.
Sophia's arm span is the equivalent of a great gray owl and
Olivia's is about the width of a red-tailed hawk.
(Taken on May 26, 2012.) 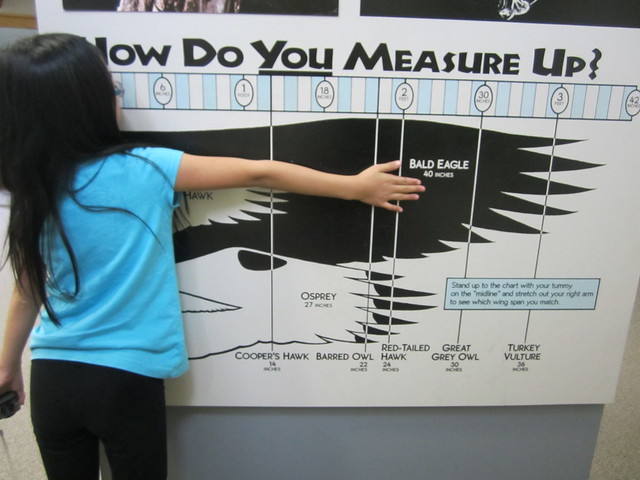 => They weigh 7 to 8 ounces.
=> Screech owls nest in a second-hand nest or tree cavity. They are willing to nest in boxes built for them and sometimes nest in wood duck nest boxes.
=> The female incubates the eggs, eating little food during the 26 to 32 days it takes the eggs to hatch.
=> Owlets fledge in about four weeks.
=> Screech owls eat insects, small rodents, small birds, and reptiles. Sometimes they perch, waiting for food, then swoop down when something attracts their attention. They also may walk along the ground or in shallow water looking for insects or other prey.
=> Great-horned owls, hawks, dogs, cats, minks, weasels, skunks, otters, and bobcats have all been known to kill screech owls. Sometimes snakes rob their nests.
=> Screech owls can be found in deciduous (hardwood) forests, lakeshores, and suburbs throughout most of Minnesota.
=> In Minnesota, owls may not be shot, captured, transported, or owned without a permit.
=> Like other owls, one of its ear holes is higher than the other. This helps it identify the source of a sound.

We also took a look at the All About Birds website. There was a section about the Eastern Screech Owl.

Size and Shape
The Eastern Screech-Owl is a short, stocky bird, with a large head and almost no neck. Its wings are rounded; its tail is short and square. Pointed ear tufts are often raised, lending its head a distinctive silhouette. 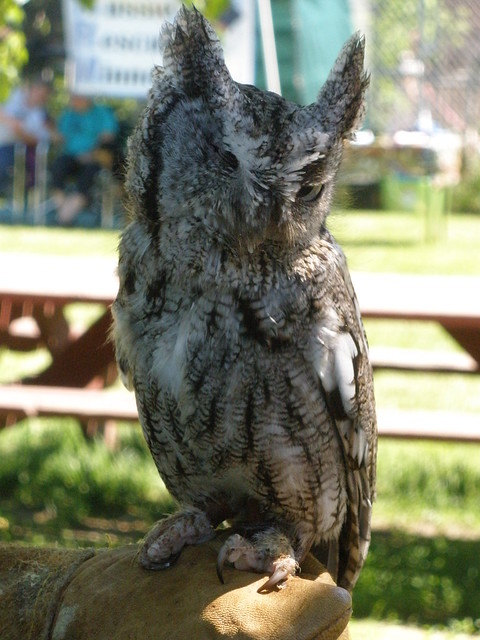 We saw this screech owl at
Warner Nature Center on June 4, 2011.

Color Pattern
Eastern screech owls can be either mostly gray or mostly reddish-brown (rufous). Whatever the overall color, they are patterned with complex bands and spots that give the bird excellent camouflage against tree bark.

Feather from a screech owl.
Source

Behavior
Eastern Screech-Owls are active at night and are far more often heard than seen. To know what they sound like, we listened to the songs of the screech owl.

Habitat
This owl is fairly common in most types of woods (evergreen or deciduous; urban or rural), particularly near water. It does not like treeless expanses of plains or mountains.

Both of the girls did a nature journal entry. Sophia's is here: 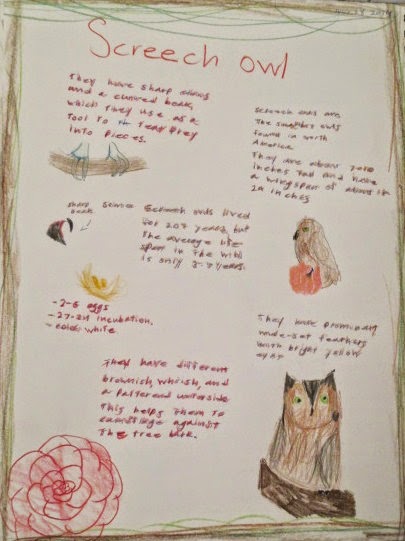 and Olivia's is here: 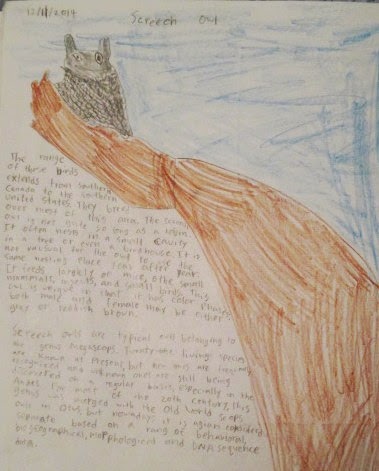 For this nature study we didn't dissect an owl pellet since both the girls have done this twice already. However, it was worth revisiting what the girls discovered when they dissected an owl pellet.

First, they pulled away all the fur from the bones in the pellet. We were all surprised at the amount of fur that was in one pellet. 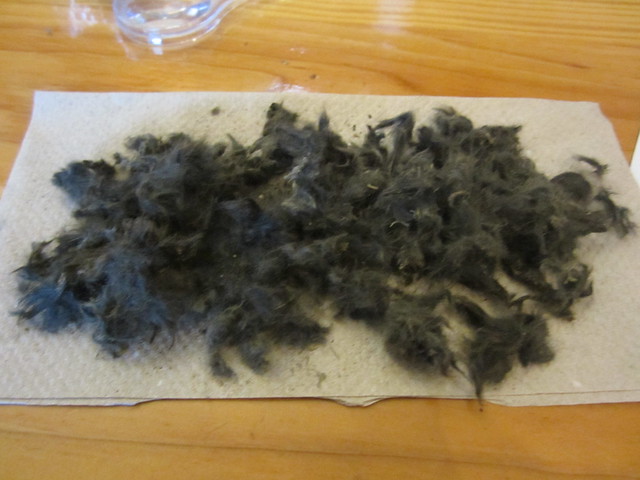 As the girls were pulling away the fur, we could see little glimpses of bones that were part of the owl pellet. 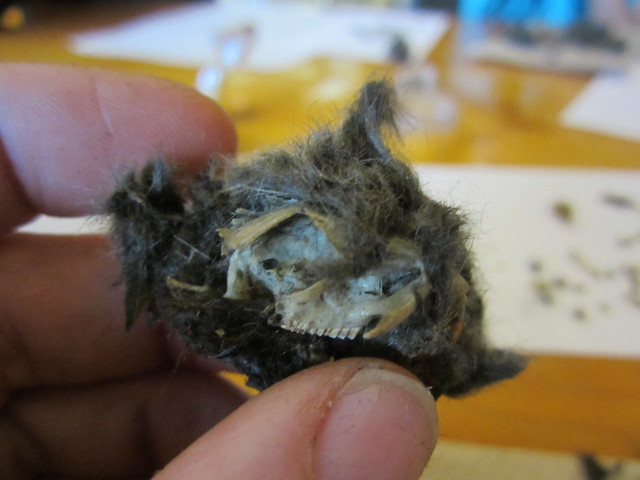 Inside an owl pellet. 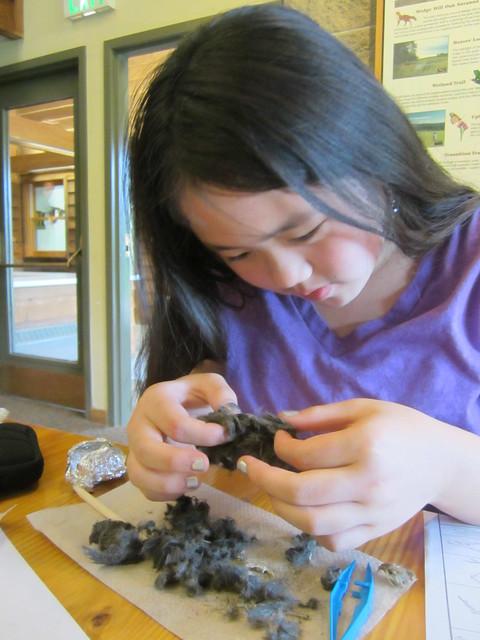 Although tweezers were supplied,
Sophia found it easier to break apart and
separate the different parts with her fingers.
The pellets were all sterilized prior to using them,
otherwise it would be best to wear gloves and/or use tweezers.

Even though Sophia preferred to use her fingers to dissect the owl pellet, Olivia liked using the tools that were provided. 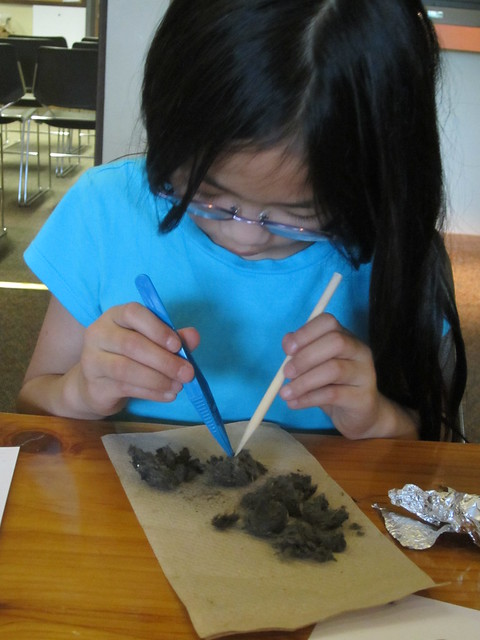 Olivia using different tools to
separate the elements in her owl pellet.

By the time that the pellet was completely dissected, there was a wide range of bones that were discovered. 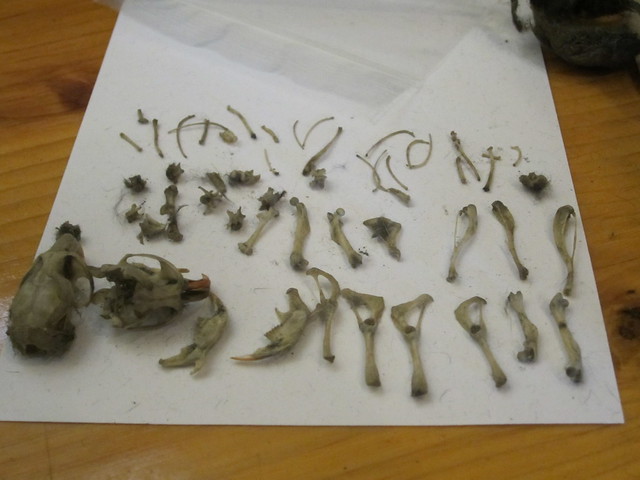 All the bones that were in one owl pellet.

Olivia dissected her first owl pellet on September 13, 2007...when she was only 4 years old. She used toothpicks to break apart the pellet. 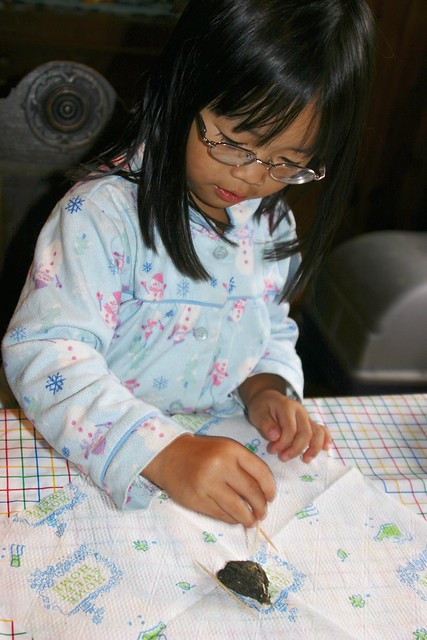 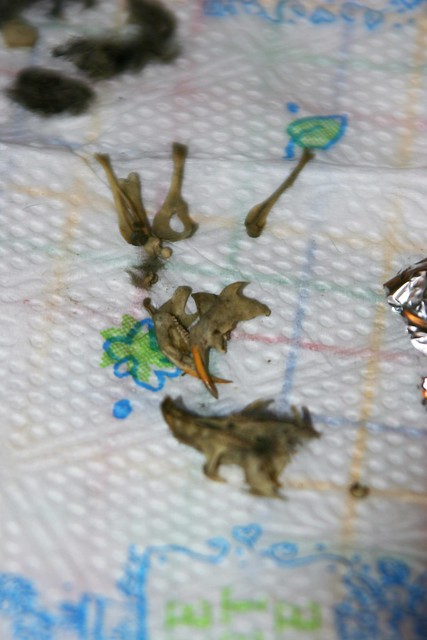 Some of the bones that Olivia found in the owl pellet
that she dissected on September 13, 2007.

To identify the bones found in an owl pellet, there's a free owl pellet bone chart.


Outdoor Hour Challenge - Owl Study, Raptors of the Night - Owls, and
OHC Summer Series - #5 Owls were referred to as inspiration.

Posted by Harvest Moon by Hand at 9:19 AM