This week for Take a Stitch Tuesday (TAST), the featured stitch is the herringbone stitch. 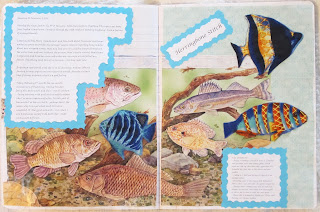 The two-page layout in my TAST journal.

This is another stitch I have never done before. It is basically an elongated cross-stitch. There are ways to embellish it by adding some extra stitching at the points and/or beading. 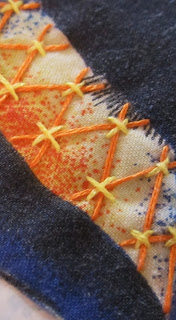 Detail on one of the fish.

The word "herringbone" means: an arrangement or design resembling the bones in a fish, used especially in the weave of cloth or the placing of bricks.

The herring - after which the stitch is named - is a fish that lives in the North Pacific and the North Atlantic oceans, including the Baltic Sea.

I remember when I was growing up my Grandma used to have pickled herring in the refrigerator. When I went to her home, she would often put pickled herring on my lunch or dinner plate. According to Wikipedia, pickled herring "...is a delicacy in Europe, and has become a part of Baltic, Nordic, Dutch, German, Polish, Eastern Slavic, and Jewish cuisine.

"Most cured herring uses a two-step curing process. Initially, herring is cured with salt to extract water. The second stage involves removing the salt and adding flavorings, typically a vinegar, salt, sugar solution to which ingredients like peppercorn, bay leaves and raw onions are added."

It seemed fitting that I include some images of fish (even though they are not herring) in my journal. 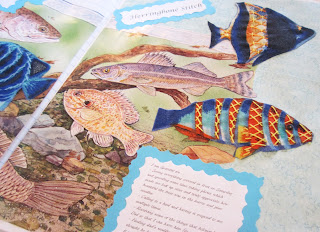 Embroidered fish using a variety of widths on the stripes.

For learning the herringbone stitch, I referred to these instructions:

When first trying this stitch, I read that drawing parallel lines in water-soluable ink will help keep the spacing even. Once the stitch is mastered, it can be done by eye - without the lines. Part of the beauty of hand embroidery is that it’s not perfect. It’s done by hand...and it looks that way.

Once I was completed with the stitching, I finished the journal entry with what has happened during the week as well as a list of things and people for which/whom I am grateful. 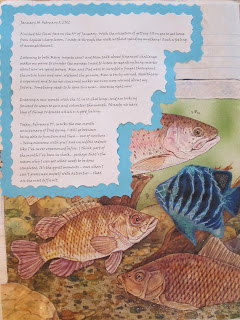 This page includes the journal entry, an embroidered fish, and
an illustration from a magazine of fish under the water in winter.

Linked with: Create with Joy and Creating My Way to Success.
Posted by Harvest Moon by Hand at 3:00 PM

Love the journal pages and the herringbone stitch is really pretty. :)

Such a pretty stitch! and more great pages for your journal!


Thanks for linking to a Round Tuit!
Hope you have a fabulous week!
Jill @ Creating my way to Success
http://www.jembellish.blogspot.com/