This week for Take a Stitch Tuesday (TAST), the featured stitch is the chevron stitch.

So, what's a "chevron" and how does it relate to embroidery?

On Wikipedia, it says that a chevron "...is an inverted V-shaped pattern." It also notes that "The chevron occurs in early art including designs on pottery and rock carvings. Examples can be found approximately 1800 BC in archaeological recovery of pottery designs from the palace of Knosos on Crete in the modern day country of Greece." 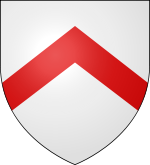 Another definition of a chevron is "...a series of  bones on the ventral (under) side of the tail in many reptiles, dinosaurs  (such as Diplodocus; see picture below), and some mammals such as kangaroos and manatees.

"Their main function is to protect critical elements in the tail such as nerves and blood vessels from being damaged when the animal either supports its weight on its tail, or pushes it against a hard surface to propel itself."

A third meaning of a chevron as it relates to geology is "...a chevron-shaped fold in stratum layers. Chevron folds are generally close to tight (interlimb angles 70 to 10 degrees) with straight limbs and small angular hinges." 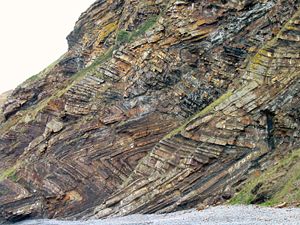 All three of the images are reflected in the Chevron Stitch - the "V" shape and/or the straight lines. With those images in mind, I decided to use Aida cloth so the stitches would be more precise than if I was using fabric and estimating where to place the needle and embroidery floss. 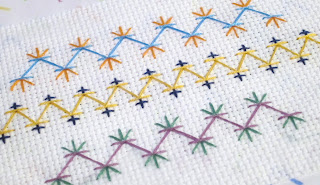 I enjoyed this stitch, even though initially it looked a bit confusing to do. It's a bit slower-going than the feather or herringbone stitches (two other stitches I've learned as part of TAST).

The potential for embellishing the stitch could go much further than what I've taken it. If this sampler wasn't going in my journal, I think adding beading to it would be a nice decorative element.

As I've done in past weeks, I included a brief re-cap of what happened during the week and a gratitude list along with my embroidery samplers. The background are random inverted "V"s done with crayons to represent chevrons in colors similar to the embroidery floss. 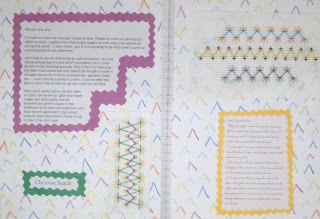 Posted by Harvest Moon by Hand at 6:46 AM

You are always so stinking creative with your homeschooling. Your children are blessed!

Your chevrons are so colorful and creative.

I am learning so much from your stitches each week! Thank you! Your journal is absolutely fabulous!!!!!

This is an intricate stitch! I am enjoying these, too. This booklet you are making is priceless. :)

I enjoyed reading your research into chevrons. That bit about the dinosaur bones is facinating. Your piece is a wondeful sampler and yes, beads would have been an interesting addition.
xx Looking forward to more!

I didn't know all that about Chevron, interesting post and lovely sample.

It is very intersting to know about chevron.
viji

in french, the word for chevron is ... "chevron" and its translation is rafter (heu, if i make no mistake)

I love what you did. I copied your tall and short one - sort of. I'm not embellishing on my sampler, but on the block, I will, and I think I might do that one.

In enjoyed your research as well, and it comes at a nice time for me as I'm thinking a lot about patterns. Thank you!

How cool that you research things so you can fully understand and appreciate them... even the dreaded sewing... scares the living daylights out of me yet I enjoy reading your research so maybe you are slowly getting to me...xx