On my list of books to read was one called Viktor Frankl - A Life Worth Living by Anna Redsand. Viktor Frankl grew up in Vienna and had developed logotherapy, a revolutionary form of psychotherapy that encourages patients to look to the future and live their lives fully, rather than relive the past. 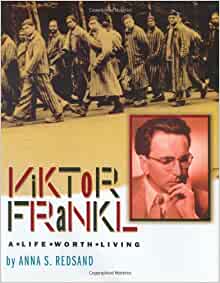 Frankl was imprisoned in the Nazi concentration camps and was able to put his theory into practice not only to help himself find meaning in his own life but also to help others who were there with him.

After being liberated in 1945, he published a book, Man's Search for Meaning, detailing his theories and experiences. This book has sold millions of copies and is considered one of the most influential books of modern times. By 1984, five American colleges had chosen it as the book of the year. In 1991, the Library of Congress and the BOok of the Month Club named Man's Search for Meaning one of the ten most influential books in America.

Below is some information I found especially interesting:

- By the time he was 24, Viktor had developed the concept that there are three main ways of finding meaning in life. The first is through action or creation. An example of meaning through action might be an auto mechanic who feels her life is meaningful when she comes up with the correct diagnosis for an ailing car and then repairs it. Meaning through creation can occur when a musician finds satisfaction in writing and recording a piece of music.

The second way to find meaning, Frankl said, is through an experience, a human encounter, or love. Through experience: the exhilaration of scaling a difficult mountain face. Through human encounter: exchange of a smile with a stranger on the street. Through love: romantic love, love for family members, and love for friends.

The third path to meaning, meaning through suffering, can come about when a person responds to a difficult or even fatal life situation that is outside his or her control.

- Frankl's logotherapy was the beginning of what would later be known among psychotherapists as the human potential movement. It focuses on the possibilities humans can create out of their reality, hence on human potential.

- Frankl worked with people who were depressed. He listened to them talk about their feelings of worthlessness and then responded with caring toughness that would become the hallmark of logotherapy. Rather than comforting them, Frankl let his patients know that life asked something of them and that they had a responsibility to respond. Although it can be very hard for someone to take action when he is depressed, Frankl recommended that his patients find places to volunteer in their communities. Once they were engaged in meaningful activities, even if they weren't paid, their depression often was relieved.

- The Frankl family and 1,300 other Jews were shoved into waiting trucks and driven to the Aspang Station for deportation. There were Jewish psychiatric patients who were part of the transport and they rode in a single old passenger car. Because Viktor supervised their care, he and his family didn't have to ride in the freight cars, which were so crowded that people had to take turns squatting on the floor and standing.

- Frankl was at Theresienstadt where there were fewer people. It was to give the appearance that the place wasn't overcrowded. The prisoners participated in "beautifying" the camp - planting gardens and painting houses. The Nazis made a propaganda film following the "beautification," portraying Theresienstadt as a place where Jews were happy, well-fed, and well dressed.

- Many of the people interned at Theresienstadt were famous - Jewish leaders, doctors, lawyers, artists, and musicians. When the Red Cross visited, the inmates presented cultural events for the inspectors. But even when the Red Cross wasn't there, the prisoners tried to keep their lives stimulating and meaningful.

- Daily life in the camp was a strange combination of exquisite beauty and extreme pain and torture. On the one hand, artists and children painted, actors performed plays, symphony orchestras played the music of the great composers, and scholars like Frankl conduct lectures. On the other hand, at the eastern edge of the camp stood a police prison where the Gestapo ran it for the purpose of controlling, torturing, and often killed Theresiendstadt inmates and others the Nazis wanted to punish.

- The indescribable tortures of the morning and the jazz in the evening was typical of the existence there - "with all its contradictions of beauty and hideousness, humanity and inhumanity" Frankl wrote.

- Frankl was sent to Auschwitz. He had brought his manuscript of his book about logotherapy and a pin he earned as a climbing guide on the Austrian mountain peaks. When he arrived at Auschwitz, the SS guard demanded that the prisoners leave their clothes and belongings in a pile. At that point, he lost his lifework and the reminder of his time on the mountains.

- He had heard stories about prisoners being told to get ready for the showers, even given bars of soap, only to realize as the door clanged shut that gas, not water, was entering the chamber.

- Mauthausen was a camp so well known for torture that even Auschwitz prisoners feared beaing sent there.

- In order to survive, the prisoners focused their dreams, fantasies, and energy on the smallest details of gettng food, getting a better piece of clothing, avoiding punishment.

- Looking to the future and thinking about his goals pulled him through. He daydreamed about lecturing about the psychology of the concentration camps. THis dream became his goal, and ironically, focusing on that dream, rather than on survival, is what helped him survive. He wrote, "I succeeded somehow in rising above the situation, above the sufferings of the moment."

- Survival depended more on people's inner strength, on their abilit yto use this horrible experience to grow as individuals.

- There was a strict rule in the camps against trying to save a man in the process of committting suicide, and suicide was common. Yet many times, Viktor spoke to someone who was considering killing himself.

- "That which does not kill me makes me stronger." (Friedrich Nietzsche)

- As the liberating armies drew near, the SS forced inmates to evacuate and march, often to their deaths. The officers were trying to do away with evidence that could later incriminate them.

= When he was freed on April 27, 1945, he weighed 83 pounds among other medical issues. Despite his poor physical condition, Frankl had survived more than 2 1/2 years in four concentration camps. The spirit of his survival is expressed in the title of a book he wrote later: Say Yes to Life in Spite of Everything.

- He learned that his entire family had died - his father from starvation, his mother gassed as soon as she arrived at Auschwitz-Birkenau, and Tilly (his wife) died of starvation, exhaustion, and disease before they could be treated by the British soldiers who liberated the camp. His brother and sister-in-law died while working as slave laborers in a mine that was part of an Auschwitz subcamp.

- The deaths of his family members caused Frankl to feel that his life wasn't worth living. He had held onto the hope that he would be reunited with Tilly and his mother, but that didn't come true. Even as he was struggling after being liberated, he felt his life must still have a purpose...that he was destined for something.

- Finding a purpose, even though he felt it was temporary, helped him live through those first few weeks without his family.

- Frankl observed that concentration camp prisoners go through three main psychological stages during their incarceration: Adjustment (including shock, disbelief, denial, a "cold curiosity" about what was going to happen next) which lasted a few days. The second stage was apathy. He called it "a kind of emotional death" and how it was necessary for survival. Not caring, or at the very least, not showing that they cared, lessened their torture. The third stage was liberation and recovery.

- The inmates had many opportunities to make choices as to how they responded to the things that were happening to them. Something as simple as shaving - even if it was with a piece of glass - would make prisoners look younger and it would give them a healthy color. It helped the prisoners look fit for work.

- Humor was another weapon in the fight for self-preservation.

- The most important tool for survival came directly from logotherapy. IT was a prisoner's belief in the meaning of his own life, no matter what was happening around him. Frankl said, "The prisoner who had lost faith in the future - his future - was doomed."

- Frankl also looked at the psychology of camp guards. Some were true sadists. Sadists were assigned to perform torture and other especially horrific tasks. Guards who were not sadists had most often become numb to what they were seeing and doing, just as the prisoners had. Prisoners who worked in the gas chambers and crematoria received a ration of alcohol to help them stay numb.

- Frankl's message in Man's Search for Meaning is that whether concentration camp prisoners or guards or people in the walk of everyday life, have a choice about how to respond to every situation they encounter.

- An important principle in logotherapy is the acceptance of personal responsibility, and patients who were looking for sympathy did not necessarily want to be expected to make an effort on their own behalf.

- Frankl spoke inside San Quentin and told the prisoners, "You were free to commit a crime, to become guilty. Now, however, you are responsible for overcoming guilt by rising above it, by growing beyond yourselves, by changing for the better."

Posted by Harvest Moon by Hand at 7:58 AM

Thanks for this informative summary. I have read parts of his work but will now find this new bio. What an amazing, courageous man.

I think it was Man's Search For Meaning tht I read years ago and was so impressed by. I believed what he was talking about. His life was so very much worse than mine, but I had gone through a lot and come to many of th same conclusions on my own, also. A wonderful man! :)