This week for Take a Stitch Tuesday, the featured stitch is the Basque stitch. It also is known as the twisted daisy border stitch.


The Basque stitch is found on old embroideries from the Basque area of northern Spain as well as from southern France and Portugal.

Traditionally, the Basque stitch was done with red thread over green fabric or white thread on blue-green background.

Since I was learning the stitch, I made two small samples. One is of three flowers and the other is the sun.

The flowers are a a bit more orderly looking. 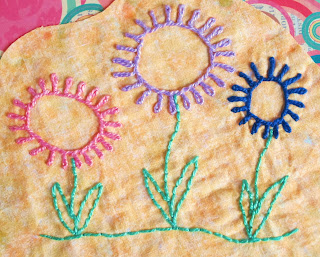 The sun has more of a chaotic look to it. It's not how I envisioned it looking...but that's part of learning. 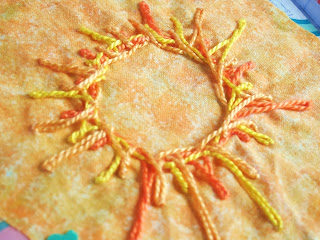 As with past weeks, I've included the embroidery samples in my TAST journal. The journal also includes a reflection about what happened during the past week, a list of five things for which I'm grateful, and images of things that represent the week. 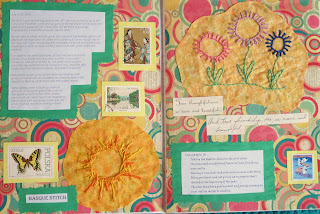 The stamps, for example, represent the stamp show that Sophia, Olivia, and I went to this past Friday. Of those stamps, one is from China (where the girls were born), and two are from Japan (where one of my friends, Yoshiko, lives).

Yoshiko has been a friend of mine for more than 30 years now...we have known each other since high school and have corresponded through high school, college, first jobs, and other transitions in life. She is a true friend...and, thus, the quotes about friendship that are included in the collage.

One quote was part of a greeting card and the other was something that my dad wrote about friendship. (I've also been going through more items of his during the past week and determining who would enjoy having it, if it is something I want to keep, or if it can be donated.)

I'm happy I'm sticking with TAST and doing this journal. It is interesting to go back and read what I wrote and all the stitches I've learned throughout this year.
Posted by Harvest Moon by Hand at 8:24 AM

Your flowers are wonderful, it's a fun stitch to work. x

I'm few stitches behind and have been wondering what to do with basque. Might have to nick your flower idea!

I love your sun!